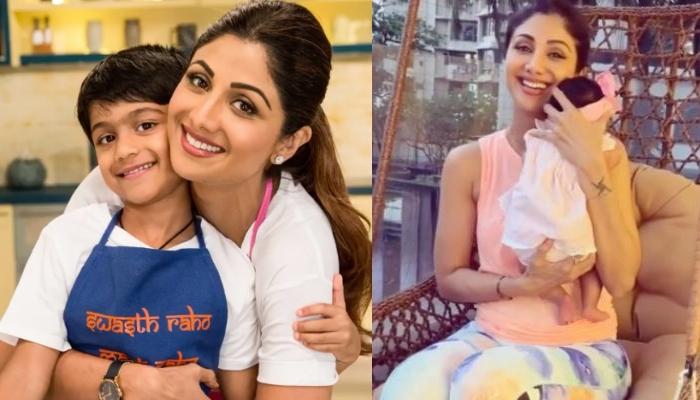 If you have grown up with a sibling, then you would agree that life always had that extra bit of flavour with a constant pillar of support and partner in crime by your side! The strongest bond that a brother and a sister share is quite evident in the song, Phoolon Ka Taaron Ka, Sabka Kehna Hai, Ek Hazaron Mein Meri Behna Hai, Saari Umar Humein Sang Rehna Hai… and their camaraderie is one in a million. Having a sibling around is a magical feeling and Shilpa Shetty Kundra and Raj Kundra’s son, Viaan Kundra, who just got promoted to ‘big brother’ is experiencing the similar joy of life. (Also Read: Shilpa Shetty Kundra Beats Up Her Hubby Raj Kundra For This Hilarious Reason, It Will Leave You ROFL)

It was on February 21, 2020, when Shilpa Shetty Kundra and Raj Kundra had given a pleasant surprise and had announced that they have completed their family. Their firstborn, Viaan Raj Kundra got promoted to ‘big brother’ and the Shetty-Kundra had welcomed a baby girl in the family. Shilpa and Raj had embraced parenthood for the second time with the arrival of their daughter, Samisha Shetty Kundra and in March, they had taken the baby home. Here’s a picture of the Kundra-Shetty family captured by the shutterbugs.

Time does fly by with a blink of an eye! One moment you are holding your newborn in your arms for the first time and the next moment, you are celebrating the milestones of their life. Three months passed by and Shilpa Shetty Kundra and Raj Kundra’s baby girl, Samisha Shetty Kundra turned 3-month-old on May 15, 2020. To mark the milestone, Shilpa posted a picture of her son, Viaan Kundra playing with his newborn sister, Samisha and the doting mummy couldn’t stop admiring her little ones. Shilpa wrote, “Happy 3 months my princess #samisha” atop her IG story.

When Samisha Shetty Kundra had turned two months old on April 15, 2020, Shilpa Shetty Kundra had penned why number 15 is special for her. Sharing a video with Samisha, Shilpa had written, “Some things in life are a little more special than the others. The number ‘15’ has been added to that list now! Our daughter, Samisha Shetty Kundra, came into our lives on 15th Feb and she turns two months old today on 15th April. It’s also a very special and happy coincidence that we have become a family of 15 MILLION on @indiatiktok today, on the 15th of April. So grateful for all the love & blessings that you have showered on my family and me over the years... humbled beyond words. Hope you continue to stand by us, rock solid, even in the years to come. @rajkundra9 #20DaysOfGratefulness #Day19 #SamishaShettyKundra #happiness #gratitude #blessed #grateful #daughter #15Million #TikTokIndia.” (Also Read: Kareena Kapoor Khan Shares Little Taimur's Joint Creation With Parents, Imprints Of The Good Memory)

Shilpa Shetty Kundra’s caption could be further read as “Ideally, as a ritual we would have stepped out of the house for the FIRST time and taken her to a temple for blessings, but as things stand today don’t have that option. Hence, will seek blessings at our mandir at home. It only makes me realise that there are so many other things we should be grateful for even if some things don’t go as per plan. So, for the next 20 days, I’m going to document one thing that I’m grateful for EVERYDAY. Starting with TODAY, I’m so grateful for just having a healthy family by my side. Let’s use this time to thank the universe for all the wonderful things and daily manifest positivity in our lives. Do join me in this exercise stating what YOU are grateful for. Tell me in the comments below or post something on your handle. Love and Gratitude SSK #SamishaShettyKundra #20DaysOfGratefulness #gratitude #blessed #family #40days #milestones #thankful #love.”

Gone are the days when adoption, IVF, single parenting and surrogacy were the tabooed subjects in our country. With the influential celebrities opening up, time and again, on opting for alternative methods to embrace parenthood and experience the joy of having a little baby in their life, Shilpa Shetty Kundra too, had revealed in an interview with Pinkvilla, why she had chosen surrogacy to welcome her second child. Shilpa had remarked, "After Viaan, I did want to have another child for the longest time. But I suffered with an auto immune disease called APLA and that came into play every time I get pregnant. So I had a couple of miscarriages. So, it was a genuine issue. I didn't want Viaan to grow up as a single child, because I'm also one of two and I know how important it is to have a sibling. Coming from that thought, I did explore other ideas as well but that didn't pan out well. At a time when I wanted to adopt, I had put in my name and everything was underway. But then, the Christian missionary shut down because they had a tiff with Kara. I waited for nearly four years and then, I was so irritated and we decided to try the surrogacy route. We had Samisha after three attempts. I had honestly given up on the thought of another child." (Also Read: Ankita Bhargava Thanks Her Little Doll, Mehr, Who Just Turned 5-Month Old For Choosing Them)