Varun Dhawan and Natasha Dalal are one of the most sought-after couples of the glamour world. On September 12, 2020, Varun shared a picture with Natasha and his caption melted our hearts. 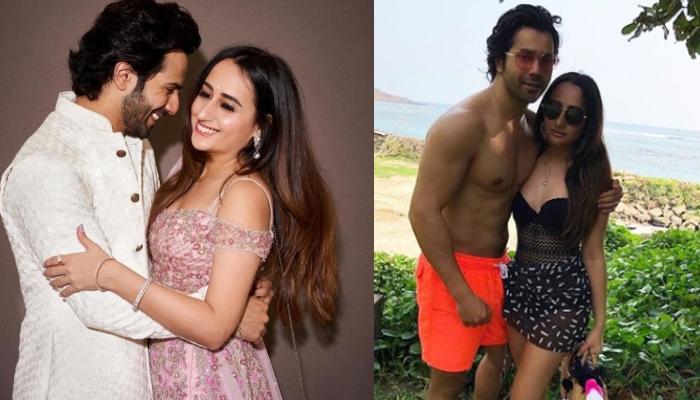 There is nothing as beautiful as falling for your childhood best friend. From the nagging habits to all the little secrets, they know everything about us, so spending life with them becomes simpler. One such childhood sweethearts are Varun Dhawan and Natasha Dalal. While Varun had never shied away from expressing his love for Natasha, she, on the other hand likes to keep her personal life out of media glares. Varun and Natasha are an inspiration to the millennials as they exude perfect relationship goals. (Also Read: Nargis Fakhri's Beau, Justin Santos Pens A Lovely Note For His 'Perfect Woman', Calls Himself Lucky)

The rumours of Varun and Natasha’s wedding has been doing the rounds for quite some time but nothing has been confirmed as of now. The day Varun Dhawan had made his Bollywood debut with Karan Johar’s film, Student Of The Year, he had become the heartthrob of the entire nation. After his debut film, Varun was linked with some of his co-stars but it was revealed later that Varun is dating his childhood sweetheart, Natasha Dalal. Earlier in February, there were speculations about Varun and Natasha’s secret roka ceremony. However, the actor had shut those rumours and had tweeted, “Hey guys before u let ur imagination run wild it was a birthday party, wanted to clarify before any false news is spread cheers.” 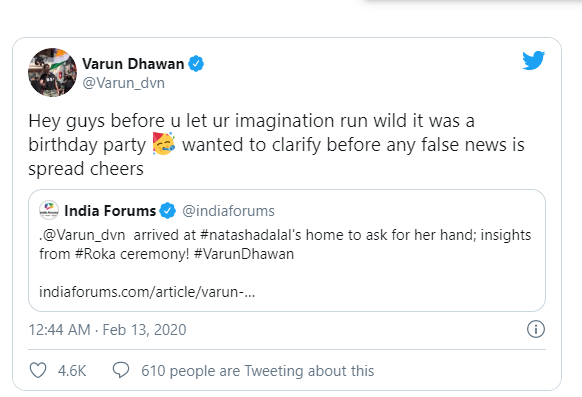 Varun is quite active on social media and loves sharing glimpses of his personal life and September 12, 2020 was no different. He took to his IG handle and shared a lovely picture with his ladylove, Natasha. In the picture Varun and Natasha posed for the camera beside a pool and one look at the lovely picture will make your heart flutter. Along with the picture, Varun wrote how Natasha is the reason behind him being fearless. His note can be read as “No I won’t be afraid just as long as you stand by me.” 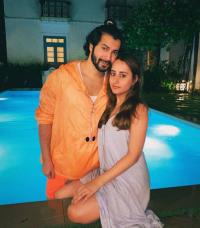 Varun loves sharing glimpses of his love for his lady, Natasha. On May 8, 2020, Natasha had turned a year older and it was her beau, Varun Dhawan, who had wished her in the most adorable way. He had taken to his IG handle and had shared pictures of Natasha with a lovely wish. His wish could be read as “Happy birthday nata. I choose you over the ufc.” (Also Read: Shoaib Ibrahim Makes Wife, Dipika Kakar Do Squats And Abs Workout, Becomes Her Fitness Guru [Video]) 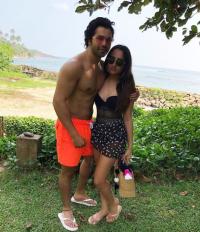 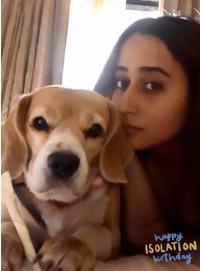 When Varun Dhawan had appeared on Karan Johar’s chat show, Koffee With Karan, he was all praises for his ladylove. In an unseen Koffe confession episode, Varun had spoken about how Natasha has always supported his dreams and it was his responsibility to support her dreams and ambitions. Talking about the same, he had said, “As far as me and Natasha are concerned, eventually after we get married and we are together and all that stuff… she has her own individuality and that is why I am with her. She has her own voice, which is super strong with things she wants to do and achieve in life and as her partner, that is something I want to support. She has been very supportive of my career since day one. I have known her since school. We were friends then. Since day one she has been supportive of my dreams. It has to be the same. From my side, I have to be supportive of her dreams. Eventually, as a couple, you want to evolve together.” 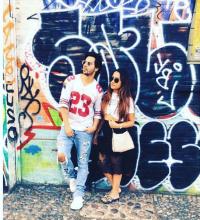 Natasha Dalal’s fashion label was featured in Hello India magazine and she had spoken about her love story with Varun Dhawan and had revealed how they went from being just friends to dating. She had revealed, “Varun and I were in school together. We stayed friends until we were in our mid-20s and then, I remember, we started dating just before I moved away. It was around then that, I think, we realised we were more than just good friends.” (Also Read: Rocky Jaiswal Roots For Hina Khan's Music Video, 'Humko Tum Mil Gaye', She Flaunts Her Bridal Avatar) 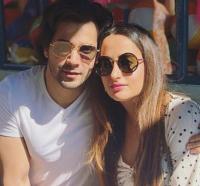 What do you think about Varun and Natasha’s love-filled picture? Let us know. Varun Dhawan and his ladylove, Natasha Dalal's wedding is one of the most-awaited weddings of Bollywood. God knows if the deadly pandemic had not come crashing down upon us, we could have witnessed Varun as dulha already! Some reports had suggested last year that Varun and Natasha are all set to