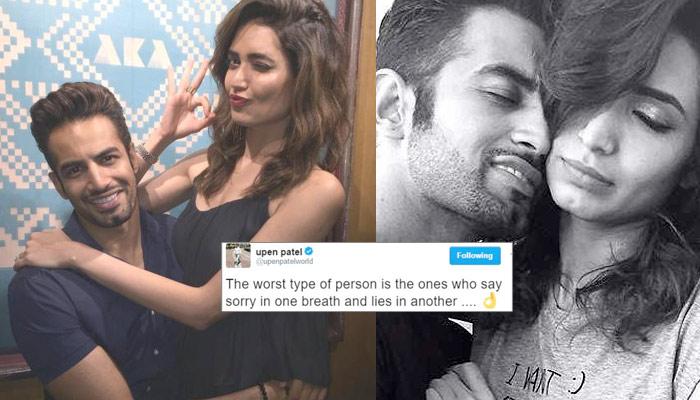 Karishma Tanna and Upen Patel were counted amongst the most dashing couples from telly land. People who followed Bigg Boss season 8 would know that Upen confessed his love for Karishma in the house itself, and they instantly started seeing each other.

Recommended Read: Karishma Tanna Cries On Road After Having An Argument With Ex-Beau Upen Patel

Post the show, both Karishma and Upen participated in the famous celeb dance reality show named, Nach Baliye, where the two got engaged on stage. They were going strong, giving some serious relationship goals. This was the reason they were even called to host MTV Love School.

Soon after the show got over, the news of their breakup started hitting the headlines, and the reason behind their split was unknown. The hearts of all UpMa (as their fans started calling them as a couple) fans got shattered.

It took a bit time for all their fans to believe that they are no more together. And, then came the news of once-much-in-love couple enjoying a lunch date at a restaurant in Bandra. Yes, that’s right! Earlier in 2017, this ex-couple got clicked by paparazzi and everyone thought that reconciliation between the two is on the way.

You May Also Like: Karishma Tanna Finally Reveals The Reason Behind Her Breakup With Upen Patel

But it seems the reason for the meeting was not the reunion, but something else. Soon after they were spotted lunching together, Upen tweeted some indirect messages. Here’s the series of tweets that he put up:

Do Check Out: Upen Patel Confirms His Separation From Karishma Tanna, Leaving All 'UpMa' Fans Sad

Also Read: Karishma Tanna's Pictures From Her Beach Vacation In Bali Is Making Everyone Jealous

Upen actually tagged Karishma in his last two tweets and thanked (or rather accused?) her for using him and lying to him. Here are the tweets:

And then, there is another one in which too he tagged her asking her something significant. Here it is:

Well, it seems the breakup has now taken an obnoxious route. We hope they settle their issues soon and at least become friends. Till then, all you guys can stay in touch with us right here to get the latest updates on your favourite celebs!