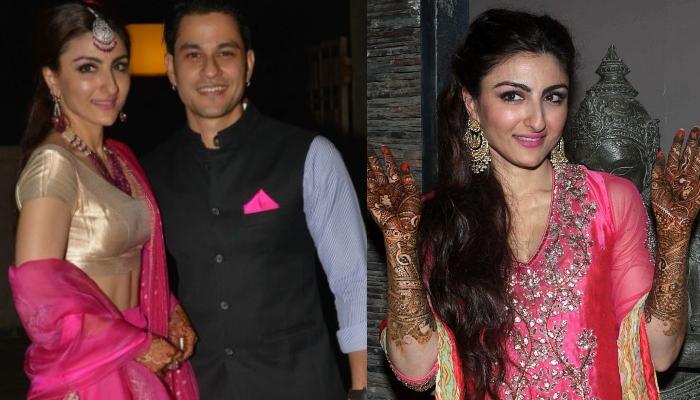 Every year, B-town takes out time from their busy schedules and come together to celebrate the festival of Karva Chauth. While some celebrate it with family and friends, some celeb couples observe the fast together and post lovely pictures on social media of how they had spent their Karva Chauth. For the uninitiated, Karva Chauth is one of the most significant and highly important festivals for all married Hindu women in India as they fast for the whole day to pray for the well-being and long life of their husbands. As a special treat, we have an unseen picture of Soha Ali Khan from her Karva Chauth celebrations as a newly-married. (Also Read: Inside Tour Of Soha Ali Khan And Kunal Kemmu's 9 Crore Worth Home Which Reflects Their Personalities)

It was on October 4, 2020, when Soha Ali Khan had turned 42 and she was showered with love and good wishes on her birthday. Soha’s birthday had begun with a heartfelt wish from her hubby, Kunal Kemmu. Sharing a picture with his love, Kunal had written, “To the one and only who can invoke all the emotions I have and some I didn’t know I had. The smile when I am happy and the sunshine when I am low and the Dictionary when I’m out of words. Happy Birthday my love” On which, Soha’s sister-in-law, Kareena Kapoor Khan had commented, “Our favourites ...have to agree on the dictionary part ...I have one too” followed by an array of hearts.

With Karwa Chauth just around the corner, we have a special treat for you. Rannvijay Singha’s wife, Prianka Singha posted a beautiful picture with her friend, Soha Ali Khan to wish her on her 42nd birthday. Prianka and Soha’s picture was from their Karva Chauth celebrations as newly-weds. While Soha had glowed brighter than the sunshine in a printed kurta and a yellow dupatta over her head, Prianka looked pretty in a pink-coloured suit and both were holding their puja ki thaali in their hands. Prianka captioned the picture as “Haaappy Haappy to this beautiful mama & friend. I am missing the neighbourly advice we keep giving each other about kid stuff, our "attempts" at working out together or rather me watching you or hearing about how many steps you climbed, our lockdown take outs and cards nights (or lack thereof seeing you could never hold more than 5 cards in your hand at once) Remember this pic.. us newly weds! Sending lots of love from Londres @sakpataudi.”

In 2018, pictures of Kareena Kapoor Khan celebrating the festival of Karva Chauth with her stylist, Poonam Damania and Rannvijay Singha’s wife, Prianka Singha had gone viral on social media. Dressed in a white and aqua blue full-sleeved top, Kareena had looked gorgeous on the occasion. But the picture of Kareena posing with her little bundle of joy, Taimur Ali Khan stole the limelight of the star mommy’s Karva Chauth celebrations with her girl tribe. (Also Read: Soha Ali Khan And Kunal Kemmu's Filmy Love Journey Finally Made Them 'Hum Hai Raahi Pyaar Ke')

On January 17, 2019, when Rannvijay Singha and Prianka Singha had celebrated their little angel, Kainaat Singha’s second birthday, her toddler friends including Taimur Ali Khan and Inaaya Naumi Kemmu had attended the bash. Sharing an unseen picture from the birthday bash, Rannvijay had treated netizens with a super-adorable picture of ‘boss babies’ in one frame. Captioning the same, he had written, “#bossbabies #inaaya #ranvir #timtim #kainu @sakpataudi @reenz290 @khemster2 @priankasingha @singhakainaat. Thanks @eventsbay for planning #kai ‘s party! #satnamwaheguru @nitisharoraofficial.”

Not only Soha Ali Khan and Prianka Singha, but Kareena Kapoor Khan too, is a part of the girl tribe and their bond can be seen in pictures share online. For instance, in July 2019 when Soha and Kareena were vacationing in London, the mommy duo along with their kids, Inaaya Naumi Kemmu and Taimur Ali Khan had hanged out at Willows Activity Farm. They were joined by Prianka Singha and Kainaat Singha. Sharing the pictures from their day out at the farm, Soha had written, “A day at the farm #willowsactivityfarm #timandinni #timandinniandkai @priankasingha #londondiaries.” Prianka too, had posted a couple of pictures and had written, "Old MacDonald had a farm ... but we went to Willows instead. One of the best day trips with the kids so far (a couple of hashtags) Satnamwaheguru Mashallah." (Also Read: 5 Times Kareena Kapoor Khan Had Broken Stereotypes During Her First Pregnancy And Became Inspiration)

What memories you have from your Karva Chauth celebrations as a newly-wed? Share it with us!