Rekha shared a very unconventional relationship with her late father and superstar, Gemini Ganesan. We stumbled upon a throwback picture of Rekha with her father and she looks unrecognisable. 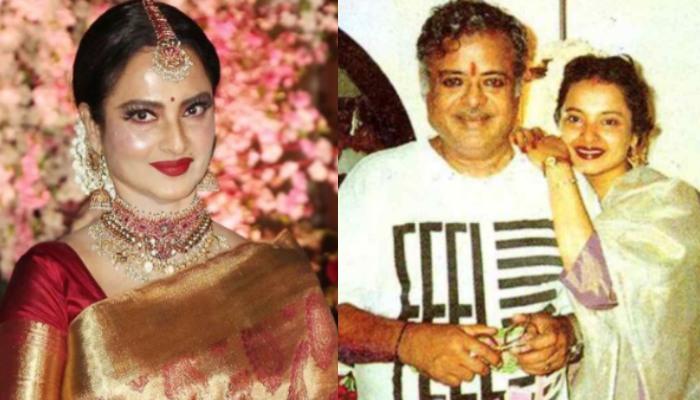 There are some relationships in the glamour world which are not known to many. However, their existence is undeniable. One such relationship is shared between the diva of glamour world, Rekha and her superstar father, Gemini Ganesan. Ramaswamy Ganesan, better known as Gemini Ganesan is one of the biggest names in the South Indian movie industry. Just like his professional life, his personal life was also splendid. Known as the ‘Kadhal Mannan’ (King of Romance), his personal life has always been the talk of the town. (Also Read: Rekha After Being 'The Other Woman', Married Mukesh Agarwal For Status Of A Wife, Ended Up In Tears)

Ramaswamy Ganesan was a chemistry lecturer at the famous Madras Christian College. He had left his job to pursue his passion for acting and had joined the Gemini studios as a production executive. He had gotten an opportunity in a Tamil film titled, Miss Malini in 1947, starring Pushpavalli (Rekha’s mother) opposite him. On the sets, Pushpavalli and Ramaswamy had grown closer. After a while, Ramaswamy had left Gemini studios and had adopted the name of the studio and had become Gemini Ganesan. Gemini was already a married man when he had met Pushpavalli. Their affair was widely spoken about and in October 1954, their first daughter was born. She was named Bhanurekha.

Although Rekha was ‘Bhanurekha Ganesan’ but she had never used ‘Ganesan’ as her surname because she was an illegitimate child and her father had never acknowledged her as his own daughter. We recently stumbled upon an unseen picture of Rekha and Gemini Ganesan. In the picture, Rekha was seen siting beside her father and shyly posing for the camera. Actor, Kamal Hassan is also spotted in the monochrome picture, sitting next to Gemini. Dressed in a saree with bindi and jhumka, Rekha looks unrecognizable.

Gemini Ganesan passed away on March 22, 2005 and in an interview with Bollywood Hungama, Rekha was asked whether she grieved for her father. Rekha had said, “Why should I grieve for him when he’s so much part of me? Why should I grieve when I’m so grateful for his genes, his teachings, rich life and his sheer existence? Grieve for what??!! I’m happy I didn’t have to share unpleasant moments with him. He existed for me in my imagination. And that’s so much more beautiful than reality. Everything I love is unqualified by worldly time constraints. I’m just a small link in the larger scheme of things. I’m not the first one to go through death, nor am I the first one to receive an award. I’m enjoying everything that comes my way…good bad or ugly. I try to make good use of what life’s experiences offer. I think I’ve done a good job of my life, whatever others may think.” (Also Read: Jaya Bachchan Agreed For 'Silsila' Starring Hubby Amitabh Bachchan's Alleged Lover Rekha, Here's Why)

Gemini Ganesan was always open about his relationships with co-stars, Pushpavalli and Savitri. His charm was such that he always had a way with women. His amazing looks, wide eyes and gentle ways had always won many hearts. He never hid his linkups with Pushpavalli and Savitri. Although Ganesan was married to TR Alamelu and then Savitri, he had never gotten married to Rekha’s mother, Pushpavalli. Do you know, Gemini Ganesan’s children from his various relationships share a great bond with each other and have credited their mothers for the same as they had never built any hatred among the half-siblings.

During her growing up years, Rekha had always yearned for Gemini’s attention but she had never got it. Pushpavalli had never gotten the title of his wife even after begetting his two daughters, Rekha and Radha. Ganesan’s personal life was not a secret, his illegitimate children and the women in his life were known to everyone. Gemini had himself termed his affairs as ‘illegal’. Do you know, Rekha couldn’t attend Gemini Ganesan’s funeral as she was shooting for a film in Kulu Manali?

Gemini’s daughter, Narayani Ganesan is a journalist and in an excerpt from her book titled, Eternal Romantic: My Father Gemini Ganesan, Rekha had shared her thoughts about her father. She had shared, “Though he never lived with us, we “felt” his presence wherever we went, for whatever we did. My mother constantly spoke about him, his likes and dislikes. Whatever you wish to call it – love or affection- the feeling my mother had towards him was strong and positive that lasted throughout her life.” (Also Read: Throwback: When Rekha Indirectly Said Rumoured Flame, Amitabh Bachchan Makes Jaya Bachchan Insecure)

What do you think about Rekha’s relationship with her father? Let us know.