Unseen Picture Of Farah Khan From Her Mehendi Ceremony, She Looked Like A Doll In Floral Jewellery

Unseen Picture Of Farah Khan From Her Mehendi Ceremony, She Looked Like A Doll In Floral Jewellery

Every now and then, we get to see unseen pictures of famous Bollywood celebrities on social media. Scroll down to see Farah Khan Kunder's unseen mehendi picture! “Mehendi hai rachne waali, haathon mein gehri laali, kahein sakhiyaan ab kaliyan haathon mein khilne waali hain, tere mann ko, jeevan ko, nayi kushiyaan milne waali hain...” This song from the film, Zubeidaa, is not only close to all the bride-to-be’s hearts, but also to her bridesmaids’ squad. Agree or not, every girl dreams of getting married even if she says she doesn’t want to (many girls do say this!). The attention that you get, the extra scoop of love your parents and near ones shower on you, the emotions of cladding your hands and feet with shaadi/shagun ki mehendi and what not, every girl desires to experience the mixed emotions of being a bride. And our Bollywood actresses are no different!

Talking specifically of the prominent film director, producer, actress, dancer and choreographer, Farah Khan Kunder, she too felt the anxiety when she had gotten married to her Prince Charming, Shirish Kunder. For the unversed, Farah and Shirish had fallen flat for each other during the shoot of Main Hoon Na. In fact, Shirish had a crush on her way before that and which was why he had agreed to edit her editorial at a much lower rate. And rest as we say is history! Today, the couple is proudly called as maa and papa by their triplets, Diva, Anya and Czar. (You May Like: 'Maine Pyar Kiya' Actress Bhagyashree Shares An Unseen Throwback Picture As A Bride From Her Wedding)

Whilst our casual Instagram strolling, we stumbled upon an unseen picture of Farah Khan from her mehendi ceremony. Famous celebrity mehendi artist, Veena Nagda, had shared a lovely picture of herself with Farah from the latter’s mehendi ceremony in 2004. In this unseen picture, we can see Farah in a yellow ghaghra-choli and she had ornamented herself with subtle floral jewellery. And how can we forget to mention her half-way done mehendi! Take a look at the picture below: 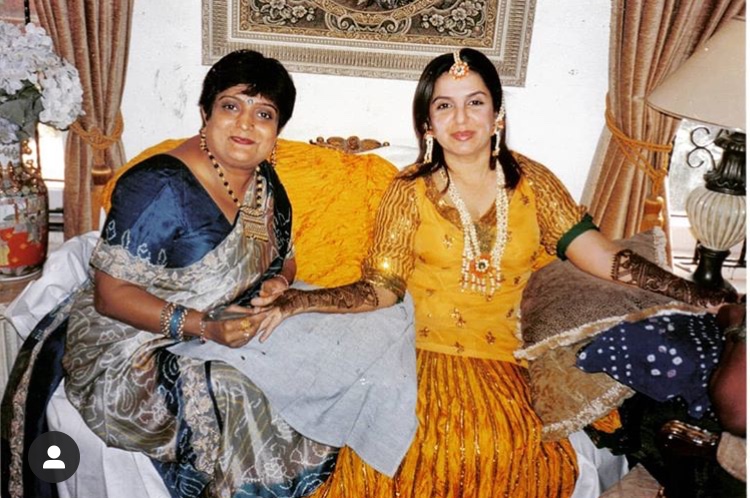 Talking about the mehendi night, Veena Nagda had once informed that the booking was done by Sanjay Khan’s daughter, Farah Khan, without revealing about the details as to whose mehendi ceremony it was. Veena was quoted as saying, "Again, Sanjay Khan's daughter Farah gave this booking. She gave me two tentative dates but I wasn't given details about whose marriage it was. Then she called me later to confirm the date and tell me whose wedding it was." (Also Read: Unseen Throwback Picture Of A 'Nerdy' Sara Ali Khan Wearing Glasses And Braces Will Melt Your Heart) 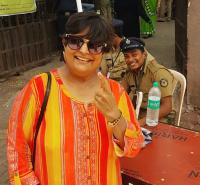 She had gone on to add, "Farah Khan told me she was applying mehendi for the first time in her life. She also said it was the first time she was wearing a ghagra-choli as she was always in jeans. She wanted very little mehendi, but Zarine and Farah (Sanjay Khan's daughter) told her the bridal mehendi should cover the hands entirely. This was a mehendi party where lots of men also attended. Normally, men don't attend. The wedding was held the next night, and yes, I was a guest."

Coming on to Farah and Shirish's relationship, the former had once told that her husband, Shirish is dominating at home. She was quoted as saying, "Shirish is more dominating at home. People think that I am dominating, but that's not true." Further talking about their decade-long relationship, she had remarked, "We don't realise it has been 10 years. It's been great journey! The last seven years have been great because the kids came along." She had also added, "We are each other's friends. We know there is somebody who loves you regardless of whether your last film is a hit or a flop." (Checkout: Unseen Picture Of Shahid Kapoor And Mira Rajput Kapoor Taking Phere At Their Gurudwara Wedding)

It is also to be mentioned here that Farah and Shirish had three marriages, wherein, the first wedding was a registered one, which was followed by a marriage ceremony as per the South Indian rituals, where Shah Rukh Khan and Gauri Khan did the kanyadaan of Farah and finally, there was a nikah.

How do you find Faraha Khan's unseen mehendi picture? Do keep us posted!