In a video shared by Twinkle Khanna, she at first showed a drawing painted by one of her kids. After this, she revealed the kid's room decor, which was inspired by the same. Check out!

Popular actress-turned-writer, Twinkle Khanna is married to the super energetic Bollywood actor, Akshay Kumar. For the unversed, the madly-in-love couple had tied the knot in 2001, in a secretive wedding, amidst the presence of their close ones. They are blessed with two wonderful kids, Aarav and Nitara. The family of four is living the best of their lives and keeps sharing cutesy glimpses from their lives on their respective IG handles.

For instance, on January 21, 2022, Twinkle had shared a glimpse of her 'undivided attention' to her daughter, Nitara. In the video, we could see, Twinkle making pancakes for her daughter. But, like every other mommy, she was also seen complaining about her little assistant, who doesn't want to help and only wants to eat. In one of the moments in the video, Nitara could be seen making a face on her pancake with blueberries, and when she was asked who is she making, she replied, 'Mama'. Sharing the video, Twinkle had penned:

"I made the pancakes and she did the decoration, then promptly ate it all up while we played the word-building card game. She may soon beat me as she is equally competitive! We resolved to make this a habit. Our kids deserve our undivided attention and sprinkles of joy as a reward for their sheer resilience through this pandemic."

On August 10, 2022, Twinkle took to her IG handle and shared a cutesy video revealing her kid's bedroom makeover. At the beginning of the video, she showed a cute painting drawn by one of her kids. Afterwards, as the camera pans, we get to see the entire room, which resembles exactly as the painting. Twinkle also penned a caption revealing that she has turned her little one's sketch into reality. An excerpt from Twinkle's caption can be read as:

"I turn this little sketch into a room with a few spins of my magic wand." 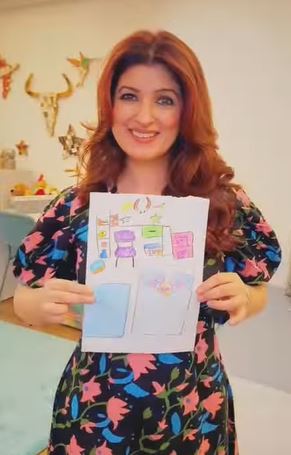 A while back, Twinkle had taken to her IG handle to share a beautiful picture with her daughter, Nitara. In the adorable picture, the two could be seen sharing a lovely morning kiss while donning their comfy cotton night suits. Along with it, she had written a long note about motherhood that could be read as:

"A mother needs to keep an eye on her child’s mind as much as she does on her homework. She must follow the tendrils of her thoughts, and each time she sees something askew, she has to nudge it back in place and she needs to do this every single day. I may be far from perfect and I live with that guilt like most other members that belong to this tribe, but if I can do this much, then that’s good enough and perhaps good enough is as marvelous as we all need to be."

Also Read: Janhvi Kapoor Recalls The Best Rakshabandhan For Her, Reveals How The Kapoors Celebrate The Festival

In another candid conversation with Sushmita Sen on Twinkle Khanna's YouTube channel, Tweak India, the divas were heard discussing various secrets from their motherhood journey. During the conversation, Twinkle mentioned how she plays the 'dual role' for her kids, Nitara and Aarav, when her husband, Akshay Kumar used to travel. She added that she is an overthinker and called Akshay a 'laid-back' person. Thus, sharing about how she maintains the balance of the boat when her kids are there, she had said:

"When my husband travels, I feel I have to play the dual role and it's not really gender-based like he's the man, I'm the woman but my weakness is that I am an overthinker and he is a laid-back person. I feel that when the kids are there you need a balance of the boat." Isn't Twinkle a hands-on mother? What do you think? Let us know!