Year 2016 seems to have brought the never-ending wedding season for Indian celebs, and we are totally loving it! After telly world’s gorgeous diva Mihika Varma tied the knot, it is her ex-boyfriend, Mayank Gandhi’s turn to take the wedding vows.

Mayank, who was the winner of Splitsvilla season 7 and is also an established television actor, will be tying the knot with the famous television actress, Hunar Hali.

Mayank and Hunar had roka ceremony earlier this year and as per the reports, their wedding will take place on August 28, 2016. The pre-wedding functions will include mehendi and sangeet ceremonies, and a cocktail party, all of which will take place on 26th and 27th August.

Mayank and Hunar met each other through their families and fell in love with each other after a few formal meetings.

While they initially shied away from accepting their relationship, they did not wait any longer to make their marriage announcement as soon as their wedding date got finalised.

Talking about their love story, Hunar told a leading daily:

“Yes, the meeting was 'arranged', but we fell in love. As someone said, 'A good relationship starts with good communication'. The first time we spoke on the phone, it was three hours behind the scheduled time to call him. Like a stern producer, he said, 'Hunar, your call time was 2 pm'. And that witty remark was an impressive start. We gelled so well that somewhere we knew that this is 'It'!”

“We have accepted each other's past and present and are now looking forward to nurturing a great future. We argue and fight, but by the end of the day we are alright. We know each other's flaws and weaknesses and still find each other absolutely amazing.”

Hunar is presently seen on Star Plus in the TV series, Dahleez, whereas Mayank was last seen in the show Ek Veer Ki Ardas Veera.

Recommended Read: 'Yeh Hai Mohabbatein' Fame Anita Hassanandani Dances With Her Husband Like Nobody Is Watching

Here’s wishing the gorgeous couple, Mayank Gandhi and Hunar Hali all the best for their wedding. And if you don’t want to miss any update related to their celebrations, just stay tuned with us! 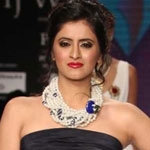