In an 'Ask Me Anything' session on Instagram, Sanjay Dutt's daughter, Trishala Dutt was asked to comment on her father's drug addiction in the past.

The tragic demise of Sushant Singh Rajput has questioned B-town celebrities and had put them under scrutiny in ways no one could have ever imagined. B-town’s drug addiction too, has come into the spotlight and even though the celebs have found themselves caught in the drug nexus for over years, 2020 had given a different dimension to it. In the past, Ranbir Kapoor had admitted to having done his ‘fair share of weed at film school’, Fardeen Khan was arrested for possession of cocaine and Prateik Babbar had revealed that his experiments with marijuana and hashish had developed into an addiction to cocaine and acid for him. Sanjay Dutt too, had confessed, “from cocaine to heroine, if there was a drug, I’ve done it”. (Also Read: Maanayata Dutt Posts A Note On Being Brave As She Stuns In Blue Dress, Trishala Dutt Drops A Comment)

Over the years, Sanjay Dutt has been a name synonymous to controversies, be it being termed as a terrorist or being labelled as a womaniser. Sanjay’s journey wasn’t a cakewalk and was full of ups and downs. It was his family, who stood by him as a pillar of strength. Sanjay has three children, a daughter, Trishala Dutt from his first wife, Richa Sharma and twins, Shahraan Dutt and Iqra Dutt from his third wife, Maanayata Dutt. 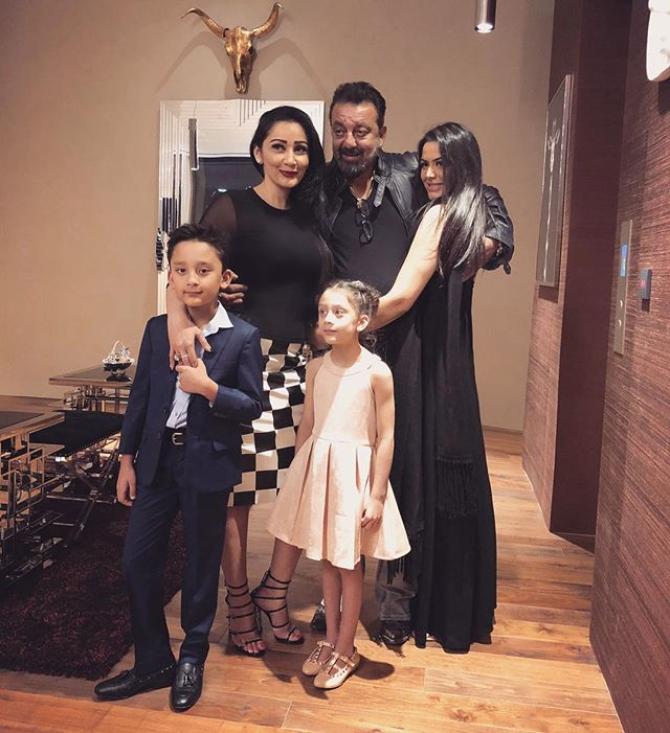 In an ‘Ask Me Anything’ session on Instagram, Sanjay Dutt’s daughter, Trishala Dutt was asked to comment on her father’s drug addiction in the past. When Trishala was asked, “Since you are a psychologist, what’s your opinion on your father’s past drug addiction?”, she explained, “First it’s important to note that addiction is a chronic disease characterised by drug seeking and use that is compulsive or difficult to control, despite harmful consequences. The initial decision to take drugs is voluntary for most people, but repeated drug use can lead to brain changes that challenge an addicted person’s self-control and interfere with their ability to resist intense urges to take drugs. These brain changes can be persistent, which is why drug addiction is considered a “relapsing” disease- people in recovery from drug use disorders are at increased risk for returning to drug use even after years of not using drugs.” 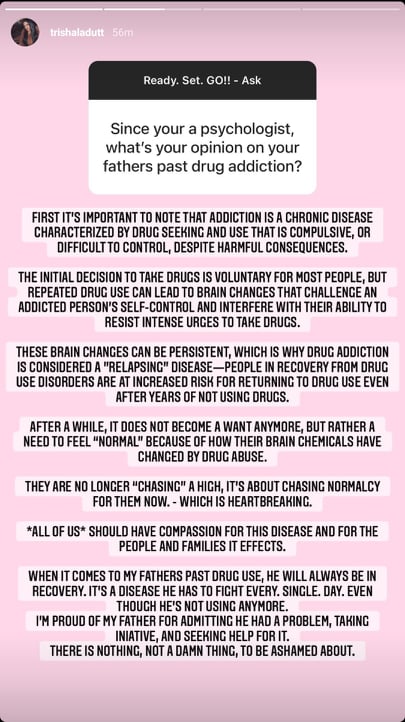 Speaking about her father, Sanjay Dutt’s addiction and how proud she is of him for admitting it and seeking help, Trishala Dutt continued, “After a while, it does not become a want anymore, but rather a need to feel “normal” because of how their brain chemicals have changed by drug abuse. They are no longer “chasing” a high, it’s about chasing normalcy for them now. – which is heartbreaking. *All of us* should have compassion for this disease and for the people and families it effects. When it comes to my father’s past drug use, he will always be in recovery. It’s a disease he has to fight every. single. day. even though he’s not using anymore. I’m proud of my father for admitting he had a problem, taking initiative, and seeking help for it. There is nothing, not a damn thing, to be ashamed about.” (Also Read: Saif Ali Khan's Sister Saba Shares Collage Of Ex-Sister-In-Law, Amrita Singh And Niece Sara Ali Khan) On the reports of her fallout with father, Sanjay Dutt, Trishala Dutt had later clarified via her social media profile. In an ‘Ask Me Anything’ feature on Instagram, when a follower had asked Trishala, “Rumours going around saying you and your father are not on good terms. Please confirm?” she had replied, “Please do not believe everything that is written in tabloids. I don’t know where or who that came from but No, it’s not true” followed by an eye roll, thumbs down and facepalm emoji. The background of her IG story was Boomerang video of Sanjay and Trishala, wherein he gave a peck on her cheek. (Also Read: When Sanjay Dutt Was Miffed With Richa Sharma When Trishala Dutt Called Him 'Uncle' Not 'Dad') 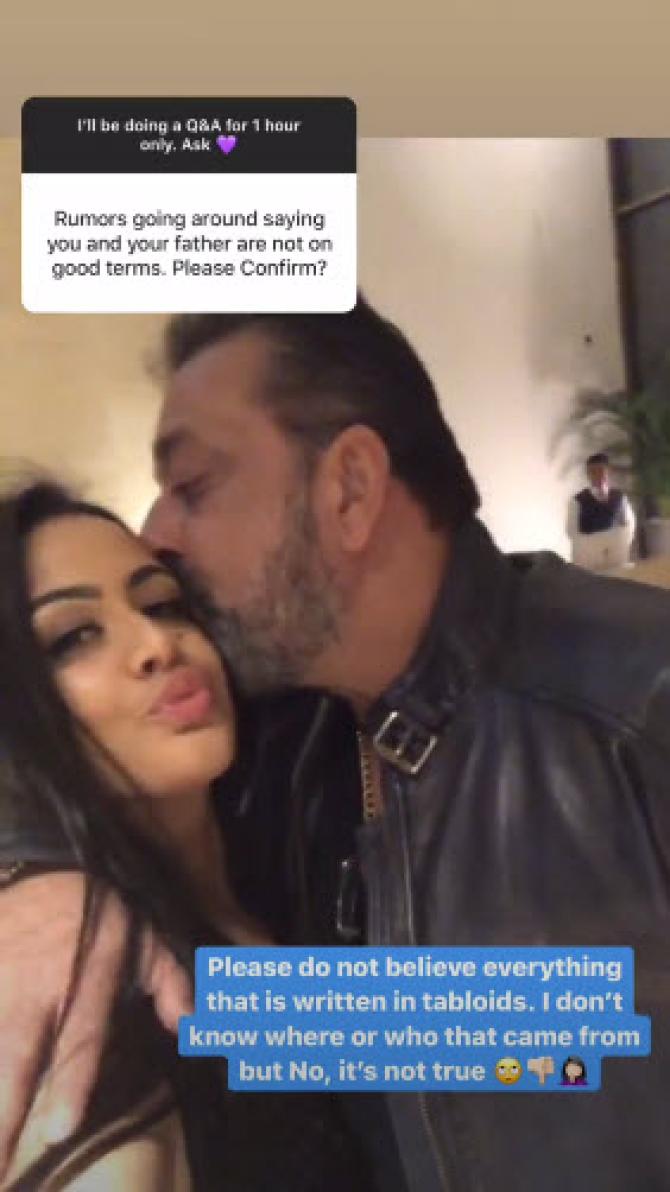 Do you agree with what Trishala said about her father, Sanjay’s drug addiction? Let us know your views.