Tina Datta's mother got emotional as her daughter got abused by Sumbul Touqeer's father on national television.

The famous reality show, Bigg Boss always makes a buzz. However, this time the sixteenth season was in the headlines for all the out-of-control fights and fake chemistries. Things got nasty when in a recent episode of the show, one of the contestants, Sumbul Touqueer's father expressed his anger while talking to his daughter. However, it was his words that left everyone in shock.

It all started when Bigg Boss gave Sumbul an opportunity to talk to her father over a phone call in the confession room. Her father scolded her for being obsessed with Shalin. However, things took an ugly turn when he called Tina Datta and Shalin Bhanot 'kaminey log' for assassinating Sumbul's character.

Now, Tina Datta's mother expressed her pain after hearing such words for her daughter on national television. In a video posted on Tina's official IG handle, her mother bared her heart out with folded hands. She was shocked at hearing such abusive language for her daughter from another contestant's father. She said:

"Since I didn’t get a chance like other contestants' parents to speak to my child, that is why I want to talk to you today. To abuse my daughter on national television and her dad has said to kick off her face – what kind of language is this? Who gave him the right to say such things? Who are you to abuse my daughter? If your daughter is going wrong, does it mean that you will abuse my daughter? Is it parents’ work?"

After this many celebrities came out to support Tina, one of them was Bigg Boss' ex-contestant, Kushal Tandon. He came out in support of her and slammed the makers for giving only one contestant this change. He tweeted: 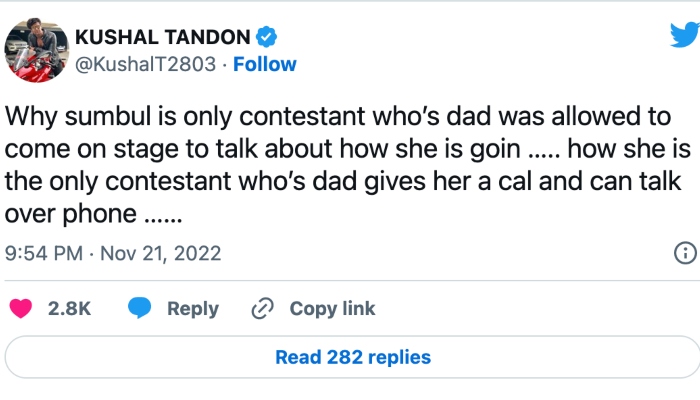 What do you think about Sumbul's father's mean comment on Tina?

Next Read: Sara Khan Reveals Ex-Hubby, Ali Merchant Keeps Coming Back To Her, Calls Him An Attention Seeker