Sonam Kapoor Ahuja recently attended the 35th Annual session of the FICCI Ladies Organisation. The Neerja actress shared that Anand calls himself with her name as she is his cheerleader. 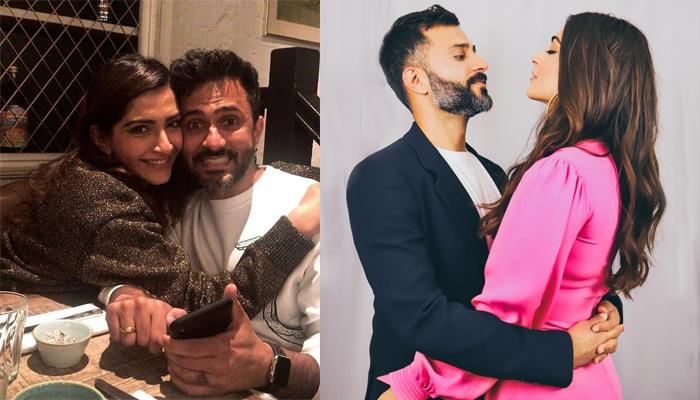 What started as a casual conversation over Facebook and Snapchat across two continents led to a bond of seven lives! That’s more or less, Sonam Kapoor Ahuja and Anand Sonam Ahuja’s love story in one simple sentence. After two months of texting and talking about sneakers, clothes and food, one day they decided to meet in London, where Anand resides. Neither of the two knew back then that exactly two years down the line, they would be taking the nuptial plunge. Yes, Sonam Kapoor became Sonam Kapoor Ahuja and Anand Ahuja became Anand Sonam Ahuja on the second anniversary of their first meeting! (Also Read: 'Naagin' Fame, Sayantani Ghosh On Her Wedding Plans, Says Doesn't Want To Marry Because Of Age)

Last year on May 08, 2018, Sonam and Anand became each other’s forever and since then, they have become an epitome of a successful long-distance marriage. Sonam Kapoor and Anand Ahuja’s hashtag #everydayphenomenal went viral during their wedding week, and even today, they hashtag each other’s photos with the same phrase. Sonam and Anand have always been vocal about their love and respect for each other on social media platforms and in interviews.

Sonam Kapoor Ahuja recently attended the 35th Annual session of the FICCI Ladies Organisation on April 13, 2019, where she talked about gender equality and how the identity of a woman is not valued in the industry but if married to the right man, marriage can bring back the value of being a woman. Sonam was quoted as saying, “In the cinema world, I was not treated as an equal but treated as a woman. But I realised it soon that women should not compromise.”

Elaborating further, Sonam Kapoor Ahuja shared how her hubby, Anand changed his name after marriage to Anand Sonam Ahuja and even today, he calls himself by the same name. The Neerja actress shared, “But art is a reflection of the society. After marriage, my husband is my cheerleader and as support, he added my name in his middle name and has become Anand Sonam Ahuja.” (You May Like: Saif Ali Khan On Refusing To Pose With Taimur Ali Khan, 'I Am Within My Right To Choose Not To Pose')

Sonam Kapoor Ahuja had talked about her and Anand Sonam Ahuja’s love story in detail with Vogue India magazine. Recalling their first meeting and that she was wearing the worst sneakers, Sonam had shared, “I was apparently wearing the worst sneakers he had ever seen. I keep telling him that he fell in love with me despite my bad sneaker game… That day, walking and talking in London, I knew he was the love of my life. He apparently knew the first time we spoke on the phone… It was just so easy.”

Talking about their similarities and dissimilarities, and how the two keep discovering new things about each other, Sonam had said, “He comes from a business background, so that’s alien to me. I’m the third generation in a film family. So there’s a lot to talk about, a lot to discover about each other, but we have a lot of similarities.”

She had further added, “The first time we met, we talked about our respective work. I was just struck by the fact that I could speak to her so openly about everything. We were chatting on Snapchat one night and she said, ‘Stop texting, just call me.’ And we spoke for two hours that night… Our friendship started over superficial things like vegan chocolates and sneakers but soon we were having deeper conversations.”

Anand Sonam Ahuja had also talked reverently about his wifey and had said, “She gives me a lot of confidence. Sonam’s very black and white. She knows what’s wrong and what’s right, and is not afraid to say it. I can see both sides of a story, but I often get stuck in the grey zone. I sometimes need to be able to say no, and Sonam gives me the confidence to do that, she supports me. She’s intuitive and patient, I second-guess.” (Suggested Read: Malaika Arora Reacts To Her 'April Destination Wedding' Rumours With Arjun Kapoor, Here's The Truth)

Isn’t Anand a kind of husband every girl wants in her life? Do share your views on this article!