We very often hear of arranged marriages, set up by the family, love marriages of couples who have been dating since years and many other such stories, but how do you explain the most amazing and perfect match of a boy who resides in India and a girl who was born and brought up in the States. And, they had no way of meeting or getting to know each other? Well, destiny had its plans of bringing them together and how!

The coming together of two wonderful and successful people, a love story different from the rest; Deepak and Shilpa’s story brings two cultures and continents together to cultivate into a beautiful South Indian Wedding in the lap of luxury.

It all started in 2012 when the two met in Bangalore. Later, in 2013, Deepak, the founder of Bangalore’s start-up ‘Lookup’, went to Milan as a speaker at the WEIRD Expo. Shilpa, now his beautiful Sindhi wife and also a Global Technology attorney with a flair for music, born and raised in San Francisco, was present there too and got a dream proposal in Venice by her knight in shining armor.

‘’Deepak surprised me by taking me to Venice for the day where he proposed with a simple flower ring just after our gondola ride. When we got to India after the trip, we got formally engaged in front of his parents with the diamond ring he designed for me. This was followed up by a formal engagement ceremony in California with 200 guests.’’

Next, it was time for the big day and the big decision. Since Shilpa’s family and friends were all based in the States, and Deepak had his people here, back in India, they had to think of a way to bring both cultures, communities and countries together and plan the wedding in the best way possible.

The task was taken up by F5 Weddings and boy did they do a splendid job! And to show her appreciation for the wedding that the team put up for them, a thrilled Shilpa quoted:

‘’We would highly recommend F5 Weddings and team to anyone. Ajay and his team are truly professional dream makers. We thank them for making our dream destination wedding a reality! ‘’

‘’We had to bring out the essence of the two cultures in this fusion wedding. Our objective was to cater to both genres of guests.’’

And because the couple was keen on having a beach wedding that showcased the true essence of the south and its wedding traditions, the Leela at Kovalam was the perfect choice for the occasion. Its close proximity to the airport was also an added advantage for them and their guests. 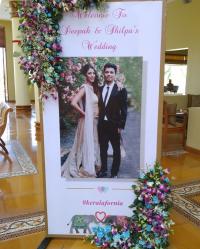 The F5 Weddings team also came up with a title for the wedding that read- ‘Keralafornia’ along with a special help desk at the reception. Each gust was welcomed with a cool designer itinerary for the wedding events along with a fun wedding goodie bag waiting for them in their rooms.

The wedding functions comprised of five main functions. The first event was a fun football match between the two wedding parties. It was held in the Leela soccer ground. While the bride’s team was titled ‘’Real CA’’, the Grooms team was “Cheetah United’’. The match started with the beautiful voice of the bride reciting the National anthem. It was a relaxing and chilled out game which was followed by a sumptuous and delicious dinner spread.

The third event that followed was the sangeet ceremony. It was a night of beautiful and mesmerising dance performances by both the families and the couple themselves. The theme here was Bollywood and the colour red with the highlight of the evening being the gigantic red love sign in the décor.

Must Read: 10 Unique Ways To Use 'Gende Ka Phool' For The Most Colourful Wedding Decor

It was now time for the big day- The Wedding. And this wedding was one visual treat to the eyes of the onlookers. The bride wore the traditional white and gold saree with heavy ornaments and a subtle hair bun, and the groom wore a shirt and dhoti-all white.

While the bride’s entire family was dressed in the traditional Kerala wedding attire (which was a surprise for the groom and his family), our handsome groom entered the venue on a magnificent elephant accompanied by the panchvadyam, which is Kerela’s traditional orchestra that plays 5 specific instruments. And if this wasn’t enough, to let the guest get a taste of the culture even more, the wedding lunch was served on banana leaves and had to be eaten sitting on the floor, the traditional sit down saddi lunch way!

Everything about this beach wedding starting from the venue, to the outfits to the ornaments and the accessories was a wonderful blend of tradition with sophistication and style.

A personnel from F5 Weddings quoted:

‘’Since a lot of guests were coming to Kerala for the first time we thought of giving them a visual treat of the traditions of the state.’’

And the final event was the grand evening wedding reception. The couple was welcomed with sparklers that friends and family members held. A fun corner was created by the wedding planning team for people to write their comments and advise for the couple. The huge cut outs of the bride and groom’s initials were placed in the décor as well.

The party had speeches from friends and families, special dedications and to add the celebrity touch, there was a performance by Indian Idol fame Mohit Lalwani. While the groom chose to suit it up in black with a tie for this one, Shilpa looked ravishing in a nude-coloured embellished off-shoulder gown paired with elegant diamond jewellery and a gorgeous diva-like hair accessory.

Recommended Read: This Beautiful Unseen Wedding Video Of Karan Patel And Ankita Bhargava Will Awe You

In all, it was a grand, big fat Indian cultural wedding that got ‘East and West’ together. It showcased the traditions and rituals of a Kerala wedding in San Francisco style! Here’s wishing the couple that gave us too many wedding trends to steal and follow a wonderful married life ahead!

Images Courtesy: F5 Weddings and Happily Ever After 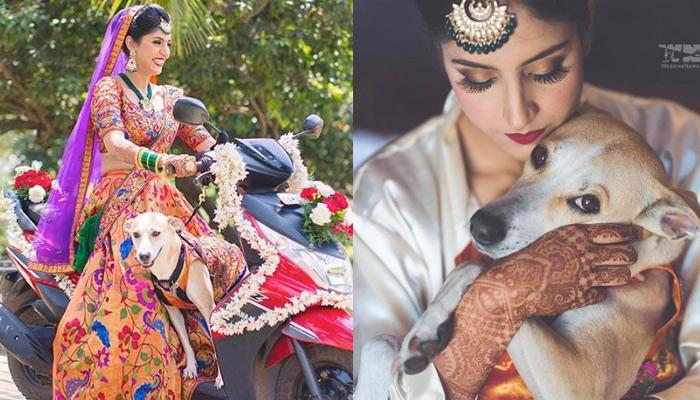