Skip Romance,This Couple Had A Super-Fun Pre-Wedding Shoot At Imagica To Relive Their Childhood

Skip Romance,This Couple Had A Super-Fun Pre-Wedding Shoot At Imagica To Relive Their Childhood 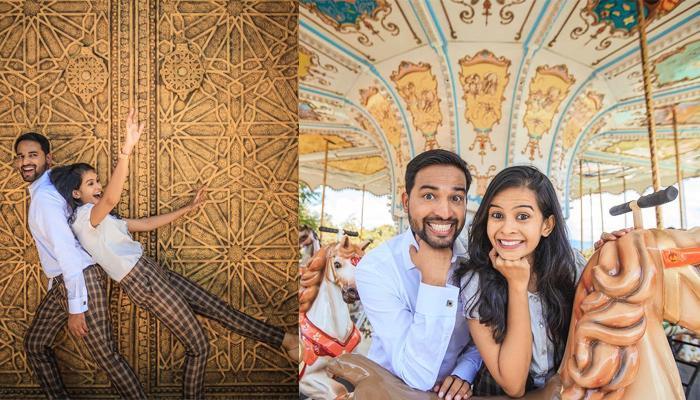 There are absolutely no boundaries to talent and to think out-of-the-box ideas and India is witnessing such amazing powerhouses now and then. After we have seen varied kinds of pre-wedding shoots with all the mushy poses and love overflowing in each picture, we always thought that to be the perfect kind of what is a pre-wedding shoot. Little did we know that it can be beyond showcasing love in every aspect.

Recommended Read: Bride Clicked Her Own Pre-Wedding And Wedding Pictures, It's Surprising How She Did It 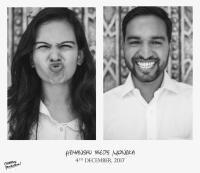 If you are having a kick-ass idea, a great photographer to capture things the way you thought it to be and a will that it will work and be a top-notch example, then you are done to have a pre-wedding shoot of your dreams. We got our hands on to this couple who thought to relive their childhood in their pre-wedding shoot after all; the wedding is leaving behind all your childhood habits and entering the new mature phase of life, right! Choosing the quirkiest place as Imagica which is all about experiencing the thrill and adventure with rollercoasters to merry-go-rounds, haunted house, rides and what not, Himanshu Sonawat and Monika Deswal got their lifetime moments captured by the talented Canonboy Productions. Check out their crazy pictures here and how they met. 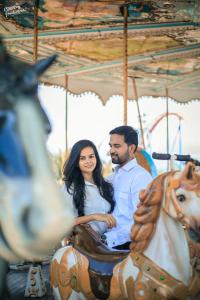 As they say, some couples meet by accident but are bonded by love and this exactly what happened between Himanshu and Monika. They saw each other from afar distances in a wedding function and then, officially met for the first time on December 25. Thereafter, they met each other for few more times with some or the other new excuses and finally, said ‘yes’ to each other. Being both of them poles apart in nature, Himanshu's cooking skill was another reason for them to justify 'opposite attracts' and the woman got lucky!

About them and why this kind of shoot 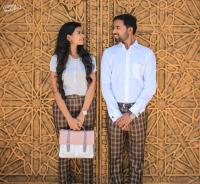 One crazy couple where Himanshu is the little less expressive one, he took time to express his feelings for Monika. Monika, on the other hand, is a crazy one by nature and speaks straight from her heart without being shy. All in all, they both are a made-in-heaven couple and their countless chemistry is seen in their pictures.

Here are some more fun pictures of their shoot: 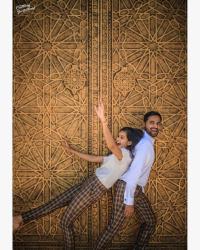 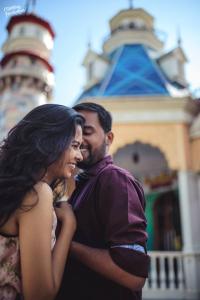 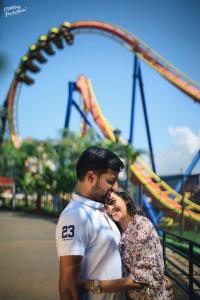 How did their shoot go, let’s hear it from the horse’s mouth. When asked the photography of the shoot, Mohit from the team Canon Boy Productions, he said:

“We shot their photographs in Imagica as they are not a lovey-dovey couple who wanted something corny or mushy but were looking for something crazy and fun.”

You May Like: 8 Television Celebrity Couples And Their Stunning Pre-Wedding Shoots 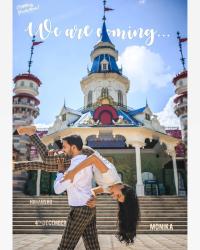 Did you think a pre-wedding shoot can be such fun and exciting too? We never thought it can be beyond those romantic poses. We are totally in awe of this couple about thinking such a brilliant idea to showcase their not so romantic nature and avoiding the cliché shoot.

Every couple-to-be who are annoyed seeing those oversentimental poses in every wedding and never gives a thumbs up for a pre-wedding shoot being scared of such stuff, can take inspiration from this couple and get going. And all you readers can stay tuned with us to know more such innovative ideas to make your wedding journey a fun over a chaotic one!

Recommended Read: Bharti And Haarsh's Pre-Wedding Shoot Is As Funny As 'The Laughter Queen' Herself