Sanjay Leela Bhansali’s movies are known for their grandeur and spectacular outfits of the actors. He is famous for showcasing Indian culture through the costumes. His epic historical romance film, Bajirao Mastani is about the 18th century love triangle of Bajirao, his first wife Kashibai and second wife Mastani.

Deepika Padukone who portrayed the role of Mughal princess Mastani left no stone unturned in her looks and reached the zenith of exquisiteness in the film. The actress was praised for her elegance and poise.

As a bride, mostly girls look at Bollywood for inspiration. It is an ultimate one-stop guide to take fashion insight from. Post Bajirao Mastani’s release, everyone was smitten by Deepika and Priyanka’s looks and wanted to don their look for their wedding. One such bride who took inspiration from Deepika’s look is Smridhi.

Smridhi got married to Arnav in a big fat destination wedding in Pattaya. It was a grand extravaganza and had every element of charisma in it. The couple had a Bajirao Mastani themed sangeet function and the décor was magnificent just like the Bhansali film. Be it family, friends or even the couple, everyone was dressed as per the theme. There were girls at the entry who were also dressed in the same theme for welcoming the guests. 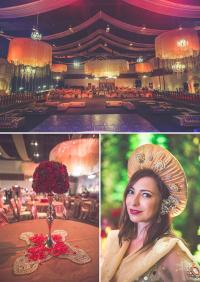 But the one whose presence stole everyone’s attention, and no one could take off their eyes from her was none other than the bride, Smridhi. Smridhi was dressed so aesthetically for her themed sangeet with those lip-covering nose rings and colossal earrings that she gave tough competition to our Bollywood’s ‘Mastani’.

Smridhi was donned in Rohit Bal and she stunned her look with flawless make up and exquisite jewellery. She wore maroon coloured lehenga with the golden embroidery. With this she wore contrasting green coloured jewellery and we are enthralled by her fine taste in styling. 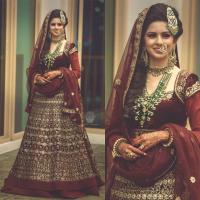 Just like Deepika as Mastani, Smridhi too highlighted her look with the Muslim culture and it looked really impressive. Her choker set, layered neckpiece, enormous set of earrings, nath and last but not the least, the jhoomar, gave a well-balanced look of jewellery.

Take a look at the pictures of this bride’s looks from her other pre-wedding functions and wedding:

Isn’t this bride looking gorgeous? What do you think of her Mastani look? Do let us know in the comments section below. We are sure now Deepika's latest Padmavati look will be the new trendsetter for this wedding season.

NEXT READ: This Bride Ditched The Usual Kaliras And Wore Kaliras Made Of Real Flowers On Her Wedding