Meet bride, Akriti Chadda from Ludhiana, who had walked down the aisle with her beau, Aashir Gajjar, in a Anushka Sharma inspired Sabyasachi lehenga and white chooda to go with it! 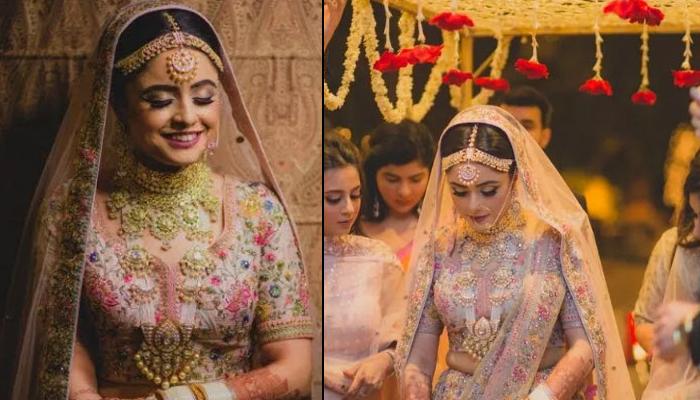 Gone are the days when the ivory/white colour was considered to be inauspicious for a bride. Nowadays brides prefer going experimental with their ensembles and jewellery. And if given a thought you would realise that be it with pastels or the traditional red, the ivory/white chooda looks wonderful and is definitely not a bad option. Having a deep traditional significance, there is no other wedding accessory that screams ‘bride’ as the chooda does. Let us introduce you to a bride, who will inspire you to get experimental and opt for a white/ivory chooda instead of a traditional one! (Also Read: A Curvy Sabyasachi Bride Opted For Broad Beautiful Neckline At Her Castle Wedding And Looked Amazing)

Meet the bindaas bride, Akriti Chadda from Ludhiana, who had walked down the aisle with her beau, Aashir Gajjar on July 7, 2018, in a 10-day long celebration. Akriti and Aashir’s wedding ceremonies had begun with a puja in Jalandhar and ended with a lavish reception in Ahmedabad. For the wedding, Akriti, just like most of the brides nowadays, opted for the celebrated designer, Sabyasachi Mukherjee, and stole our hearts with her elegance. Akriti’s peach lehenga with intricate floral embroidery was similar to that of Anushka Sharma’s bridal lehenga. While the very name of the designer is enough to trigger our curious minds, we have a very fascinating fact to share about Akriti’s bridal look.

Akriti Chadda had accentuated her bridal Sabyasachi lehenga with polki and gold treasured pieces which include maatha-patti, choker, a long haar and a nath. Lotus motifs to match the dress and tinkling pearls, Akriti's beautiful smile made her look even more splendid. But more than everything, it was her white chooda that had stood out in her bridal look. Taking the non-traditional route, Akriti experimented with her look and we loved how she had slayed the white chooda with her bridal attire. 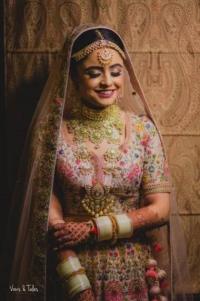 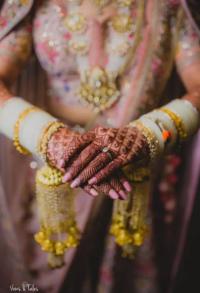 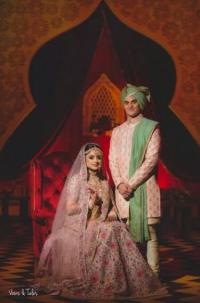 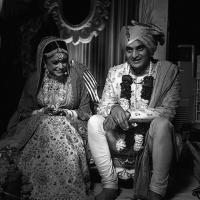 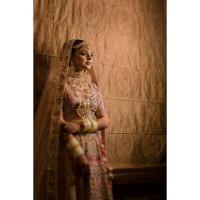 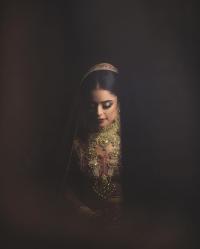 For the chooda and haldi ceremony, Akriti Chadda had kept her look simple in a yellow-coloured kurta-salwar which she had paired with a red-coloured dupatta. With her hands clad in henna, bangles wrapped with a white handkerchief and kalire tied on it, Akriti made for a happy bride amidst her family and friends. For the reception ceremony, Akriti had opted for a floor-length navy-blue coloured suit which had accentuated with a light-blue-coloured dupatta. Yet again, it was her white-coloured bridal chooda that stole the limelight! 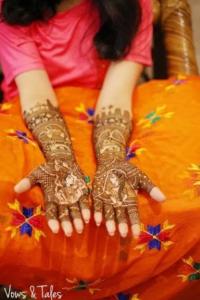 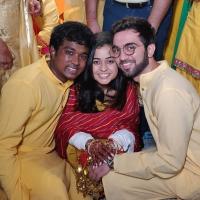 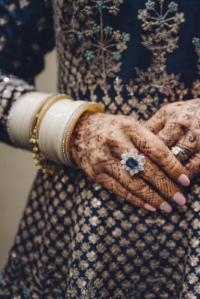 Revealing her love story, Akriti had remarked, "I, Akriti Chadda Gajjar (formerly Akriti Chadda), met my now-husband Aashir Gajjar while I was on a research trip to Seattle during my PhD at the Hong Kong University of Science and Technology. I was new to Seattle and he had been living there for a while, working for Amazon. We were looking for houses together and he asked me out on a Pizza date. I was skeptical at first, but having known no one else in the new city at the time, I said yes! Also, he said Pizza – so that trumped my inhibitions anyway. In any case, we hung out together everyday for two weeks and then I had to fly back to Hong Kong. As much fun it was, neither of us was interested in a long-distance relationship, especially having known each other only for two weeks. This was December 2016.”

The ‘two states’ drama in Akriti and Aashir’s love story could be further read as “But as fate would have it, we couldn't stop talking to each other. We’d face time all day and all night, it was a 16 hour time-difference in the place we were in. And eventually we decided to take the plunge – but I wasn’t ready to do anything without involving my parents and he was very supportive of that. So I visited him in April 2017 again to see if we actually feel the way we think we do and we did. So he spoke to my parents and both of us flew down to India in May 2017 to meet both the parents. After a little bit of the ‘two-states’ drama, he’s a Gujarati and I am a Punjabi, the parents finally said yes. And like they say, the rest is history. We tied the knot on July 7, 2018 and it has been a beautiful journey, just like he promised." (Also Read: This Indian Couple's 'Desi Style Shaadi' At Disneyland Paris Is What A Fairytale Wedding Looks Like)

Speaking about the big-fat Punjabi wedding, Akriti had shared, "It was the fairytale big-fat-Punjabi wedding I always wanted. I can't thank my parents, Mrs. and Mr. Sanjay Chadda & my pseudo-parents Mrs. and Mr. Satish Jain enough for giving me the wedding of my dreams. It was a typical Punjabi wedding - spanning 10 days, starting with a pooja and ending with a Reception. Given our two states situation, it was very thoughtful of Haveli Heritage, Jalandhar to plan the decor in a Punjabi theme for the Mehndi, and Gujarati theme for the Engagement. I felt nothing less than a princess on all the days, especially the formal events. Everything was perfect - the events, the decor, make-up artists, and of course, me getting married to the most wonderful person in my life."

Akriti Chadda and Aashir Gajjar had completed one-year of togetherness on July 7, 2019, and to mark the occasion, she posted some unseen pictures from their wedding and had written, “All the books that try to tell how romantic and perfect a marriage is going to be, their authors haven’t really been in a marriage. It’s like a constant feedback loop - sometimes you need more, sometimes less but it’s mostly always there. Here’s to forever learning, growing and being partners in love and anger - always dancing or hugging it out. Happy First Wedding Anniversary Baby! Here’s to many many more.” 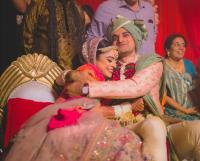 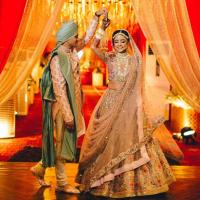 To commemorate her engagement anniversary and thanking her then-fiancé for the ‘most perfect proposal ever’, Akriti Chadda had captioned her post, “This time, last year… And what a year it has been. Thank you for being a great boyfriend, fiance and now, a kick-ass husband. Happy Engageversary, my love I love youuuu! Still can't get over the most perfect proposal evaaarrrr.” 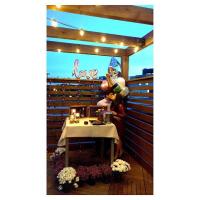 Thanking him then for giving her a proposal of her dreams, Akriti Chadda had remarked, “You, Mr. Gajjar, the ABSOLUTE love of my life, have outdone yourself too with this. I can't begin to put in words how I feel even if I tried. I am so excited to spend the rest of my life with you. Thank you for making this beginning of our new journey absolutely picture perfect, and for giving me the proposal of my dreams (and Pinterest board) I'm yours, forever and always. And for the rest of you, THANK YOU. It wouldn't have been what it was without your execution skills. So thankful for our little family in this cold city. #HeAsked #ISaidYes #HePutARingOnIt #JustEngaged #NewBeginnings #HelloFiance #SurpriseProposal #proposalxweddingsutra #DreamProposal #DearFutureHusband #Love #Mine #TakenForever #RitzKaAashiq #HappyBeginnings #GoingGajjar.”

Reminiscing how life took a wonderful turn after she had said ‘yes’ to Aashir Gajjar, Akriti Chadda had posted a collage on her Instagram and had written, “17/11/17 - I wonder how my life would be if I had said no to the pizza date. I was asked out on this time last year. But who says no to pizza? So I said yes and I have got to say-that it was the best decision I ever made. (The Pizza was delicious, and so was the pie that came after) I don’t have pictures with you from that day because that would have made me seem like a creep but I do have pictures from soon after. You know if anyone had told me at the time that the first picture was taken, that you and I will end up where we are today, I would have laughed. I’m not saying that I would have said no to it, all I’m saying is that all of this is so unexpected and yet what I have with you is the most beautiful thing ever. It has been a year full of firsts, full of love, experiences, travel, happiness, ups, downs, IIT vs VIT, FaceTime dates, snapchat streaks, the cutest pictures and most of all - The memories that I will never trade for anything. Thank you Mr G, for the roller coaster of a ride, just like you promised. I’m all set to complete the journey with you, one day at a time. with you by my side, with the same love as you do in all of these testimonial pictures. #timeflies #oneyear #happyanniversary #sortof #seattle #Ahmedabad #Hongkong #HKIG #love #posers #nope #candid #promise #mine #loveyou #socheesy #dealwithit.” (Also Read: This Video Of A Pandit Singing Bollywood Songs On Pheras Instead Mantras At A Wedding Is Going Viral) 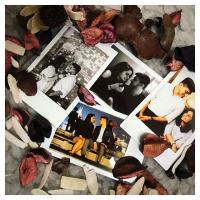 Thank you, Akriti for showing us how white is the new red for the brides!