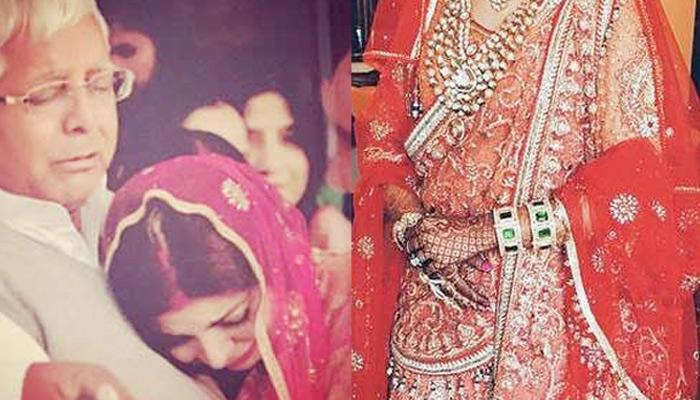 The wedding further cemented the strong ties between the two political families. Raj Laxmi, is the youngest daughter of Lalu, while Tej Pratap Singh is an MP from Mainpuri, Uttar Pradesh. Despite it being a purely arranged marriage, the couple seemed very much in love, with both of them beaming in their wedding pictures and hoping for a happy married life ahead. Let us take you through this biggest political wedding gala.

Recommended Read: Deepika Singh Dancing At Her Devar's Wedding Proves Why Bhabhi's Are The Best

The pre-wedding shagun was taken by Lalu and his wife Rabri Devi, to Lucknow on December 14, 2015. Lalu and his wife along with son Tejasvi, daughter Misa and other relatives finalised the wedding details with Mulayam Singh, and his son and UP Chief Minister, Akhilesh Yadav and other family members. The ring ceremony was held in New Delhi on December 16, 2014 in a private ceremony, with just a few close friends and relatives attending the do.

The ceremony was held in Saifai, in Etawah, UP. Held on February 21, 2015, it saw the presence some of the biggest names from politics and Bollywood including PM Narendra Modi and Bollywood actor Amitabh Bachchan. A staggering one lakh invites had been sent out for the tilak ceremony of Tej Pratap Singh Yadav. The other important guests at the ceremony were Rajya Sabha member Ram Gopal Yadav, Urban Development Minister Azam Khan, and politician Amar Singh.

About 550 Swiss cottages were erected inside a stadium, and other 250 ordinary cottages for 1500 people were put in place, on a college ground. At the main venue, 10 giant LED screens were fixed for live coverage of the tilak. Lalu performed the tilak in a grand pandal bearing a festive look with a decked-up stage. A special band, called in from Varanasi, which had earlier performed at other big political weddings, was another major attraction of the ceremony.

Also Read: This Famous TV Actor Secretly Gets Married 2nd Time To A Supermodel And A Single Mother

A staggering one lakh invites were sent out to bigwigs across India. A colourful band welcomed the baraat as the bridegroom arrived at the venue on a chariot, bedecked with a variety of flowers, at the Ashoka Hotel, in New Delhi.

The groom looked dapper in his gold sherwani that he had teamed with a red pagdi and a red kamarbandh. 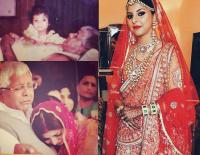 The bride matched the look of her groom in a traditional orangish-red and gold lehenga, studded with Swarovski crystals. It was her uncut diamond jewellery that swept us off our feet!

RJD president Lalu Prasad Yadav had lined up a virtual who's who of the country’s power circuit for the wedding. Along with PM Narendra Modi, former PM Manmohan Singh also attended the gala. Sonia Gandhi, Priyanka Gandhi Vadra and Robert Vadra were also seen blessing the couple.

Other political bigwigs who came to bless the couple included actress and politician Jaya Bachchan, NCP President Sharad Pawar, and JDU President Sharad Yadav, apart from many more ministers from Bihar and UP.

It was definitely a grand affair, with all the luminaries from across the country attending the wedding. While two of the strongest political families come together with this alliance, we at BollywoodShaadis wish the lovely couple a very happy married life ahead, and may their lives together be a blissful journey!

NEXT READ: Dhirubhai Ambani's Grandaughter, Married In The Jewellers' Family, Wore A 'Chooda' Made Of Diamonds

Indian cricket is blessed to have so many incredible names in their hall of fame and exceptional cricketers on the field right now, who are taking the legacy forward. And, in the context of batsmen, we have names like Lala Amarnath, Mohammad Azharuddin, Dilip Sardesai, Sourav Ganguly, Virender Sehwag, VVS