The fairytale wedding of Salman Khan’s sister, Arpita Khan, with her long-time beau Aayush Sharma, was solemnised at the Taj Falaknuma Palace in Hyderabad on November 18, 2014. The grand wedding not only became the talk of the town, but also became the buzzing news in all the leading tabloids. It was indeed a star-studded affair with who’s who from Bollywood and also from the political arena attending it. So, how did the Khan khandaan celebrate the marriage of their sweet little daughter? Let us uncover the exclusive details just for you.

Love story of the bride and the groom Arpita Khan is the youngest sister of Salman Khan and Aayush Sharma, son of politician Anil Sharma, is a businessman based in Delhi. The two met through common friends in 2013 and started dating. The couple had always been open about their love for each. They even got themselves tattooed with each other’s name to express their love. So, it is evident that marriage was only the next thing on the cards. The wedding card of this beautiful couple was intricately designed and looked extremely classy. The gold-plated invitation had beautiful rose print and was presented in a box. This box contained several leaflets giving details of Arpita Khan’s big day and all other pre-wedding functions.

Has this invite just left you wondering if there's any other out there that can give it a competition? Well, check out Interesting Wedding Invites Of Bollywood Celebrity Couples

With two big families into picture, the wedding was going to be the most extravagant one. The wedding venue was the historic Taj Falaknuma Palace, considered to be one of the most beautiful palaces of the Nizam. The entire venue was booked for the wedding and was closed for the outsiders. There was an exclusive security check, and help was taken from the local police as well.

The invitees' list, which did not have more than 250 invitees included the dignified personalities from the political arena, Bollywood, Tollywood and also the business world. Here is the rarefied list of guests starting with Prime Minister Narendra Modi, President Pranab Mukherjee, Congress President Sonia Gandhi. While most of the guests made it a point to attend the wedding, many of them could not make it because of their busy schedules. Here is a look at those who attended the wedding: While everything in this wedding was taken care of by the Bhais of the bride, we believe you must know these Responsibilities Of A Bride's Sister At Her Wedding as well.

The celebrations began at the Khan's residence, Galaxy Apartments before the entire family left for Hyderabad for the wedding. Each wedding ceremony truly mesmerised everyone with its grandeur. The celebrations kicked off in Mumbai with the haldi and mehendi ceremony of Arpita Khan on November 16. The function was attended by close friends and family. The bride looked radiant in a maroon and pink Sabyasachi outfit. The maroon lehenga was embellished with heavy work, and the dupatta was in a pale shade of pink. The mehendi was prepared by Arpita’s mother-in-law and sent specially from Delhi.

Look no less than this stunning bride on your mehendi ceremony, here is How To Look Stylish On Your Mehendi Ceremony The sangeet ceremony, which took place at the Galaxy apartments was indeed star-studded. It was in this ceremony that brought Salman Khan and Shah Rukh Khan in one frame after a long time. They blessed the beloved bride with love and happiness.

While Shah Rukh Khan could not make it to Arpita's wedding, but it is reported that he gave a very special wedding gift to the bride. Arpita is fond of designer bags, and the actor just presented her a huge hamper of expensive handbags. The hamper had all latest handbags from various leading international brands. Well, the King Khan truly knows how to win hearts. The wedding which was held in the luxurious palace of Hyderabad was truly a royal one. All the wedding rituals were according to the Hindu-Punjabi traditions. Our resplendent bride was dressed in an Abu Jani and Sandeep Khosla outfit. It was a traditional maroon lehenga and looked million dollars on the bride. She paired her lehenga with kundan jewellery and looked nothing less than a diva. The groom looked dapper in a sherwani designed specially by the local Hyderabadi Makhdoom Brothers. It was studded with Swarovski beads of crystal glass, which looked dazzling on the gold sherwani made from jamwar, a special cloth. The very famous Makhdoom brothers gifted this sherwani to Aayush as a gesture of their affection for the Khan family. Everyone was also curious on what will the Khan brothers wear on the special day. Well, it was Raghavendra Rathore sherwani for them.

Recommended Read: Revealing The Love Story Of Dia Mirza And Sahil Sangha That Turned Into A Fairytale Wedding The entire night was a fun-filled event. Various celebrities like Mika Singh, Aamir Khan, Katrina Kaif, Varun Dhawan, and many more shared the stage to shake a leg.

It seemed that the entire atmosphere of the wedding once again stirred up the emotions of Salman Khan that he had in the past for his ex-flame Katrina Kaif. All the celebrities certainly seemed to be having a gala time at the stage, but looked like Katrina Kaif was not really willing to come up on the stage and perform. From the stage, Salman Khan said on the mic while the song chikni chameli was being played, "Katrina Kaif, your song is playing – please come on stage." While the actress tried to avoid, Salman eventually said, "Not Katrina Kaif – Katrina Kapoor, please come on stage." As Katrina went on to the stage, the actor jokingly mentioned, "I gave you a chance to become Katrina Khan, but you chose to be Katrina Kapoor." Woah! That's interesting! Check out the video yourself: Food and catering was specially taken care of by the family. It was ensured that the food served the taste buds of their special guests pretty well. The theme was Deccan cuisine for brunch, lunch as well as the dinner. Some lip smacking items on the menu included Hyderabadi Biryani, Haleem'and Pathar Ka Gosht. The bride was dressed in a white lehenga designed by the designer duo Abu Jani and Sandeep Khosla. She looked stunning with a delicate matha patti on her forehead. She also wore the traditional Punjabi style red coloured chooda, which complemented her attire. While the groom looked handsome in a velvet maroon outfit.

Don't Miss: 10 Unique Ideas For The Entrance Of An Indian Bride The celebrations ended with a sweet cake, which was ordered specially from Mumbai. It was made by the celebrity chef Pooja Dhingra, and it took her and her entire team, three days to complete this cake. It was a layered cake weighing almost 150 kg. The cake was studded with gold macaroons, decorated with sugar flowers, and topped by gold foil emblazoned with the initials of the bride and groom- AA. It was a beautiful way to celebrate the union of this beautiful couple.

This event was attended by most of those friends who could not attend the wedding in Hyderabad. The reception was held on November 21 at the Taj Land's End in Mumbai. The attendees included Shah Rukh Khan, Govinda, Shatrughan Sinha and his daughter Sonakshi, David Dhawan, and many more. Among the veterans of the industry, there were Dilip Kumar and Saira Banu in the event. Arpita wore a heavy lehenga on her reception, while Aayush was in a suit.

Here's wishing a lifetime of happiness to Arpita Khan and Aayush Sharma. 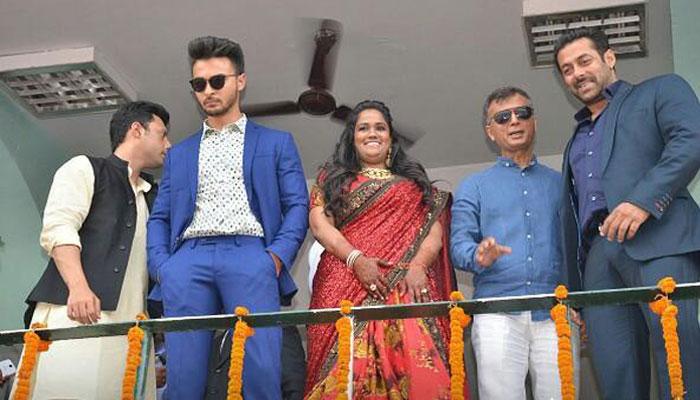 Bollywood’s bhai, Salman Khan’s sister, Arpita Khan’s wedding with her beau, Aayush Sharma in November 2014 was no less than a fairytale (Check it out here in case you missed it earlier). Be it the pre-wedding celebrations at their Mumbai residence, the grand wedding at Taj Falaknuma Palace in Hyderabad,