A clip of the upcoming episode of The Kapil Sharma Show is going viral all over the internet, as we can see guest, Jaya Prada calling Dharmendra the biggest flirt of that era. Watch now! 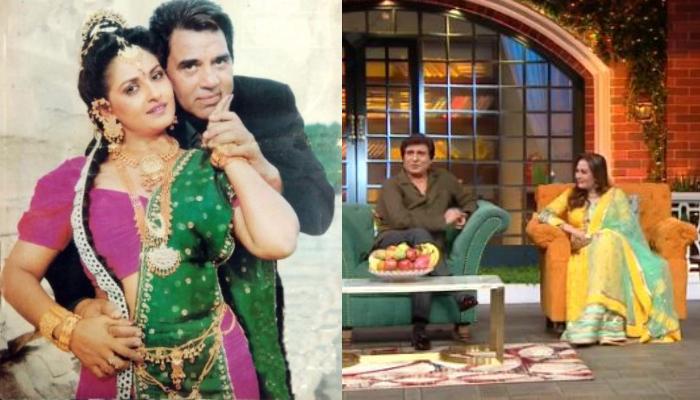 Popular comedy show, The Kapil Sharma Show is going to host veteran actors, Raj Babbar and Jaya Prada, and the legendary actress has called Dharmendra the biggest flirt of their generation. The revelation has set the internet in splits and people are anxiously waiting for this episode that is going to telecast on January 17, 2020. Talking about Jaya ji's revelation, then it's not a surprise for anyone as we all know how charming and handsome Dharam ji was in his younger days. Once during an award function, Bollywood's greatest actor, Dilip Kumar saab was called up on the stage to present an award to Dharam ji and the actor had heaped his immense praises on him, as he had revealed a lot of things about Dharam ji. (Recommended Read: Ishita Dutta's Husband, Vatsal Sheth Helps Her With Kite Flying On The Occasion Of Makar Sakranti)

The legendary actor had complimented Dharam ji's exceptional acting skills and had told everyone that when he had seen him for the first time, he was mesmerised with his looks and had thanked God for giving him a chance to live in Dharmendra's era. According to Dilip ji, Dharam ji had something special in him that had made everyone fall in love with him. After all these years, Jaya Prada has split some beans about Dharam ji's charm in the teaser clip of The Kapil Sharma Show's upcoming episode, and it's simply unmissable. Scroll down to take a look!

In the upcoming episode of the popular comedy show, The Kapil Sharma Show, we will witness two legendary actors, Raj Babbar and Jaya Prada gracing the show. However, a teaser of the show is going viral all over the internet for all the hilarious reasons. The show's host, Kapil Sharma asked the veteran actress, Jaya ji to reveal the name of the actor who was the biggest flirt of that time. While the actress was thinking about it, show's judge, Archana Puran Singh told Raj ji that Jaya ji will take his name. But the iconic actor said, "Main bohot shareef tha inke liye". After which, Jaya ji said "Dharmendra" and her answer left everyone in splits. After which, show's host, Kapil Sharma can be seen saying "We love you Dharam paaji" with sheer happiness and laughter. Take a look:

Well, there's no doubt that Dharmendra was one of the most handsome, talented, and fearsome actors of his generation and it was his attitude of always taking different roles in order to prove the mettle of his acting prowess that had made everyone fall in love with him. For the uninitiated, Dharam ji had worked with Jaya Prada in a lot of films during the 80s and 90s, and some of the notable ones are Insaaf Kaun Karega, Qayamat, Mardon Wali Baat, Kundan, and Ganga Tere Desh Mein. Both Jaya ji and Dharam ji had looked great together, and it was their sizzling chemistry on the big screen that had made them one of the most loved jodis of that era. (Don't Miss: Anupam Kher Credits His Mom, Dulari For His Success In Bollywood, Recalls Her Values And Sacrifices)

For the uninitiated, Dharmendra had tied the knot with Prakash Kaur in the year 1957 and has four children, Sunny Deol, Bobby Deol, Ajeeta Deol and Vijeeta Deol. Despite it, the actor had married Hema ji and had converted his religion into Islam to keep his two marriages intact. While Dharmendra and Hema Malini's wedding had received a huge backlash from the media and their own fans, it was actor's first wife, Prakash Kaur, who had defended them and had silenced every one by revealing that she has no problem with Dharam ji's second marriage. After all these years, the time has healed all the cracks, and there are no grudges between them. (Also Read: Soha Ali Khan And Kunal Kemmu Turn Into Competitive Parents As They Draw Unicorns For Inaaya)

Are you excited for this upcoming episode of The Kapil Sharma Show? Let us know!