'Bheeshma' actor, Nithiin will marry his long-term girlfriend, Shalini Kandukuri on this date as official and preponed date has been reported. Find out! 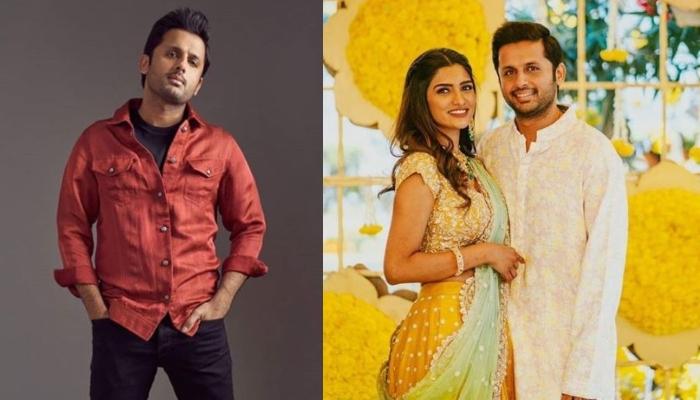 One of the most popular actors in the country, Telegu superstar, Nithiin, is famous for his exceptional acting skills and romantic films. However, in real-life also, he’s a super-romantic guy, who knows how to woo and make his lady, Shalini Kandukuri feel special. Not many people know this, but the actor had proposed his long-term girlfriend most uniquely and hilariously. Nithiin had first thought of going down on one knee but found it too conventional and unmemorable. After which, he had decided to propose her lady by standing on one leg and it had paid-off brilliantly as she had laughed for some minutes and had said ‘Yes’ afterwards. (Recommended Read: Arjun Rampal Dazzles On The Cover Of GQ With His Daughters, Mahikaa, Myra And His Son, Arik)

Both Nithiin and Shalini had decided to marry each other on April 16, 2020, in Dubai. But because of the ongoing COVID-19 pandemic, the plan had scrapped. But now a new marriage date of the madly-in-love couple is doing rounds on the internet, scroll down to know it!

According to a lot of sources and reports on the internet, it has been reported that the famous Telugu superstar, Nitthiin, who was last seen in his blockbuster film, Bheeshma is going to get married to his long-term girlfriend, Shalini Kandukuri on July 26, 2020, in an intimate wedding. Reports suggest that marriage is going to happen in Hyderabad and only the closest family members, friends, and relatives will be there at the wedding. Also, it has been reported that the wedding festivities are going to begin soon after the end of inauspicious Ashada Masam month according to the Hindu calendar. Both the families have fixed this date after seeing the hope of having a big wedding in the latter months of this year getting diminished each day.

Interestingly, when the Cinema Express has reached out to the Nithiin’s sister and renowned producer, Nikhitha Reddy for confirming all these reports running all over the internet. The doting sister has clearly stated that, so far no date has been finalised by the families, but soon they’ll fix it for sure. In her words, “The marriage date is not yet finalised, and we will fix it soon.” There are tons of people, who are claiming that the official marriage date has been leaked and the family will announce the same date after some weeks. But for now, all the fans of this famous Telugu star, who will also be seen in the Telugu remake of Bollywood’s blockbuster film, Andhadhun are in a state of mixed feelings.

For the uninitiated, both Nithiin and Shalini are in a relationship with each other for the last eight years now but were friends in the first three years of their solid bond. Shalini is a simple girl from the beautiful city, Hyderabad and had completed her Master’s in Business Management from the UK. The actor has revealed in a lot of interviews that their love story isn’t a filmy one. (Don’t Miss: At Rangoli Chandel's Housewarming Party, Sister, Kangana Ranaut Showers Love On Her Nephew, Prithvi)

Once in an interview, Nitthiin had revealed that both of them had met each other at a party through some of their close and common friends, but none of them had tried to woo each other. But he had stretched on the fact that their relationship is a mature one and with time and patience, they had decided to spend their lives with each other forever. (Also Read: Shikha Singh Gives Glimpses Of Her Little Angel, Alayna, Shares Some Paw-Some Pictures Of Her)

Are you excited for Nithiin and Shalini’s wedding? Let us know!