We have seen Ashish and Archana in various roles on-screen and we have loved them in all. But now, it is the time to fall in love with their cute love story. They met and they just fell in love; this is a story of love at first sight and a happily ever after. You will feel like you are reading a romantic novel.

So, here is the love story of Ashish and Archana.

Ashish and Archana were both shooting in Baroda for their respective shows, Chandragupta Maurya and Shanidev when they first met each other. Their common director friend Gautam Nagrath introduced them to each other and Ashish fell in love with Archana then and there.

"We met in Baroda at Sagar studio, I used to shoot for Chandragupta Maurya and she used to come for Shanidev’s shoots. We met through our common director friend Gautam Nagrath. I guess for me it was love at first sight."

Ashish was very sure since the beginning that he wanted to marry Archana, so he proposed to her directly, not for dating but for marriage. The shy Archana literally ran away from there. But, finally, said yes.

Don't Miss: Steal-Worthy Tricks To Use His Sun Sign That Will Make Him Propose To You

About their courtship, Archana shares:

After the beautiful proposal that Ashish made, the couple got married in a grand style. Archana, who thinks that the marriage proposal is the best surprise that Ashish has ever given to her, gushes:

"When I had signed a new show,  Ashish had prepared a candlelight dinner for me and after having 2 glasses of wine he proposed me. According to him, professional life sort ho gayi thi so why not sort personal life too."

Recommended Read: 3 Shocking Claims Made By Malaika Arora Khan In Her Divorce Petition For Arbaaz Khan

These two love birds got married on January 30, 2013. They got married thrice, a Hindu wedding in Jaipur, a Christian wedding in Goa, as Archana is a Catholic and finally a court marriage.

Take a look at these as well: 9 Bollywood Actresses Showing Off Their Engagement Rings

Their Jaipur wedding was a lavish affair in which many celebrities RSVPed. Ashish entered the mandap dancing on a horse when he saw a very scared Archana on the other side of the room. But, Ashish's happiness and positivity made her forget about all the qualms that she had. Archana expresses:

"I wanted to run away from the wedding because I was getting very scared but when I saw Ashish dancing (he was sitting on the ghodi) I don’t know why I just felt relieved and happy. Suddenly everything was fine, the first thought that crossed my mind was that he is the right man for me, he will love me forever...and so he does".

Must Read: 18 Signs That Show He Is The Right One For You

Ashish and Archana are completely in love. These are two people who love to share everything with each other. While Ashish admires Archana's honesty, Archana loves how Ashish supports her dreams and helps her to achieve them. They enjoy the compliments that they get from their fans. They have even named their new house based on the name given to them by their friends.

"All our fans have always loved us unconditionally, indeed, we feel blessed. I feel very happy when seeing us as a couple our fans say that they believe in true love. We make them believe that love does exist. Our fans call us Ashna (Ashish + Archana) and we call our new house Ashna too."

They believe that keeping the romance alive is essential in a marriage and suggests the same to everyone. They make sure they provide happiness to each other. Ashish, however, confessed that he made Archana cry once which was, although, for a happy occasion.

"My mom flew in from Jaipur especially for the finale (Jhalak Dikhhla Jaa) and my wife was also there. They broke down when my name was announced. This is the first time I’ve made my wife cry." 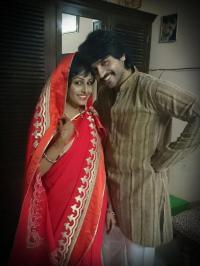 Well, they have been living happily ever since. Our on-screen Ram, Ashish found his real life Siya in Archana. They recently celebrated their wedding anniversary in Lonavala where they cut their anniversary cake by enjoying a hot air balloon ride. We hope that they celebrate their togetherness with love every year.