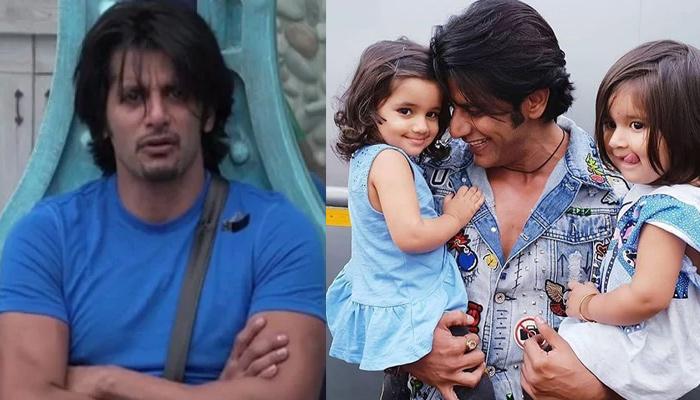 Ugly brawls, throwing accusations at each other, wild card entries, rejection in love, fighting over the smallest of things and tumults of planning and plotting- this sums up the Bigg Boss 12 house in toto! With only a handful of celebrities who had entered the house with the hope to emerge as a winner, only 4 are remaining, namely, Dipika Kakar Ibrahim, Sreesanth, Srishty Rode and Karanvir Bohra. (Do Read: Kareena Kapoor Has A Big Compliment For Step-Daughter Sara Ali Khan, Makes Interesting Revelations)

Speaking of Karanvir Bohra, his wife Teejay Sidhu too, is grabbing a lot of eyeballs. Of late, Teejay’s open letter to the Bigg Boss 12 team raised a hue and cry among the masses, with most of the people supporting her for raising her voice. While you can read the letter here, we have an update for you from Karanvir’s home. In an interview with The Times of India, Teejay Sidhu shared some emotional statements on what their twin daughters feel when they see their daddy all weary, sad and teary inside the Bigg Boss 12 house.

Speaking about the same, Teejay stated, “They see their dad on screen in tears or angry and get really sad. They don't like it and wonder what's gone wrong. They immediately ask KV to pick them up thinking that he too can see them through TV, just the way they can see him. And when they see no response from KV's end, they get really upset.”

She further stated, “Both the babies are thrilled and excited to see KV as they feel that he is actually around them. They say hi to him, try communicating with him when they see him on TV. They feel that even KV can see them and it's actually a live set like his other shows. Though I don't allow them to watch a lot of BB. They run here and there in the house and stop the moment they see or hear their father's voice on TV and start talking to him." (Must Read: Deepika Padukone And Ranveer Singh's Hilarious Wedding Memes Are Taking Social Media By Storm)

Teejay’s sweet little encouragements for her hubby, never fails to make our day! A few days back, Teejay posted a picture from Karanvir’s first appearance in the Bigg Boss house and wrote a beautiful caption to go along with the post. The caption could be read as, “Congrats, #sweety, on being the first contestant to enter #BigBoss tonight! Loved your entry, loved the act. I know entering #BigBoss was a hard decision to make, but I'm very proud of you. I know you're doing it for the right reasons and I am with you one hundred percent. You did say you'd #love it if I worked so you could be a stay-at-home Dad! ;) Sorry, this time YOU had to be the one to go! ;) Next project, you stay with the #babies and I'll work! #Loves you! @karanvirbohra #bigboss12 @colorstv.”

Upon seeing Teejay’s post, Hina Khan made an extremely sweet gesture, wherein, she passed on a beautiful message from Karanvir (when she went inside the house to perform a task as a moderator) and wrote it as a comment on Teejay’s post. The message could be read as, “And I just met him..he asked me to tell you that he loves you and kids a lot & he's missing you all a lot.” Isn’t that extremely sweet? Not only Hina, Dalljiet Kaur too, commented on the picture. Checkout the screenshots below:

Before the show had started, a source shared that Karanvir's younger twin, Vienna is extremely attached to her father. The duo literally had to be pulled away from each other while Karanvir was leaving for the Bigg Boss house! A source close to the couple had shared, "Vienna, the younger Bohra twin, is especially attached to Karanvir. When she said goodbye to him last night, she wouldn't let him go. She cried so much, and so did he. Karanvir has never really been seen getting that emotional or that upset before. Vienna literally had to be pulled away from her father." In an interview with The Times of India, Karanvir opened-up about the most difficult part of his journey and had stated, "Ohhhhh! Don't remind me! I think that's the one thing that is really holding me back. It is going to be the most difficult part of this journey - being away from them. How many firsts I am going to miss I don't know. I am missing their second birthday as well.” (Read on! Farhan Akhtar's Comment On Shibani Dandekar's Throwback Picture Reveals They Are Madly In Love)

Karanvir, we hope that you play well and emerge as a winner!