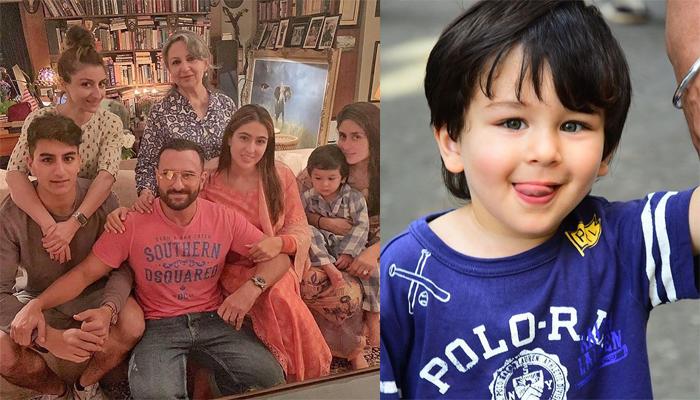 From giving us high-end but cutesy goals on how to lead an amazing life, Bollywood families have taught us a lot. And the Pataudis have come a long way in this department. From strong family values to how to be down-to-earth even with stardom knocking on the door, members of the Pataudi family are truly one of the most respected families of the Tinseltown. (Also Read: Katrina Kaif Left Me, Salman Khan Says, Hinting About Their Relationship And Who Broke Up)

Sharmila Tagore, Saif Ali Khan, Soha Ali Khan, Kareena Kapoor Khan, Sara Ali  Khan, Taimur Ali Khan and Ibrahim Khan were on a dinner night get together recently on May 27, 2019. The Pataudis enjoyed an awesome dinner night hosted by Saif Ali Khan and Kareena Kapoor Khan. Sara Ali Khan along with her brother- Ibrahim Khan, Sharmila Tagore with her beti- Soha Ali Khan attended the dinner hosted by Saif and Kareena. Soha Ali Khan had shared the following unseen picture from the dinner night on her Instagram handle yesterday, on May 29, 2019, and had adorably captioned it as, "Like the branches of a tree #family #familygoals #missingafew @saraalikhan95."

Sharmila Tagore, in an interview with the Mumbai Mirror, has revealed insights about the Pataudis' dinner get together. Sharmila Tagore shared that Saif Ali Khan had cooked the dinner, "Saif cooked for us; he made a lovely, salad with cherry tomatoes and avocados, along with a mushroom and broccoli dish and roast chicken."

Sharmila ji also added that because of Taimur Ali Khan's sleep time, they had to wrap up early. The veteran actress was quoted as saying, "Taimur was getting agitated so we wrapped up by 9.30-10 pm as get-togethers now depend on the kid’s schedule.” Talking about her daughter, Saba Ali Khan, Sharmila ji added, "Saba is fasting and after breaking her roza she doesn’t like going out, so she stayed home." (Don't Miss: Katrina Kaif Reveals Whose Wedding Will She Attend, Arjun-Malaika Or Ranbir-Alia, Has A Valid Reason)

The Pataudis have always spoken reverently about each other. On Koffee with Karan, Sara Ali Khan had talked about her father, Saif Ali Khan, “For him, taking a step like Sacred Games is so admirable. He doesn’t care about what people have to say. He’s just out there to do his work to the best of his abilities. He and I would agree that he’s doing his finest acting now.” Sara had further added, “He’s always just a phone call away… I am very thankful to Kareena [Kapoor Khan] because she makes my father happy.”

Sara Ali Khan had also added, “He’s a lot like me—we’re both readers, we both like history, we’re both travellers. He is 25 years older than me, which isn’t a lot. I am right in between the age gap of Taimur [Ali Khan] and my father.” She had also added, “To be honest, I don’t get to see Taimur very often but every time I do he’s a bundle of happiness. When Taimur is happy, the whole room is happy. He is my blood and the source of my father’s joy.”

In an interview with the Mumbai Mirror, stepmom, Kareena Kapoor Khan had spoken about Sara Ali Khan, “Sara is a rare combination of beauty and brains and that has happened to the Indian film industry after a long time. She can hold a conversation with anyone and at the same time give a shot in which she’s looking absolutely gorgeous. She has all it takes and I think she will be one of the brightest stars on the screen. I can only hope and pray for the best for her.”

The Veere Di Wedding star had revealed in another interview, “We're like best friends. Saif refuses to come out with us. She's my bar hopping partner. I enjoy my equation with her." She further stated, "It's pretty amazing, they have a wonderful mother. They are the most well-brought-up children. I always remember Sara standing up and doing adab. Both Sara and Ibrahim are like that. I am as a friend to them. At times me and Sara chat over a glass of champagne. That's the way Saif wanted and that's the way I wanted it. Whenever she wants to call me she does at a time when Saif isn't around and she doesn't want to talk to him. She talks to me.” (You May Like: 'Bahu Hamari Rajni Kant' Actress, Neha Kaul's Baby Shower, She Is 7 Months Pregnant, Pics Inside)

Saif Ali Khan preparing food for the Pataudi dinner get together is the most adorable thing, right? Share your views!