Saif Ali Khan and Kareena Kapoor Khan taking a break from their hectic schedule, and have left for Pataudi with son, Taimur Ali Khan, who was piggy-backing on his abba.

The cutest living prince in the country, Taimur Ali Khan’s picture is bound to mellow down anybody dealing with a rough time! This munchkin is not only his star parents, Saif Ali Khan and Kareena Kapoor Khan’s 'apple of the eyes', but ours too! Paparazzi’s favourite child, Taimur is often clicked, which only makes us personally want to thank them for sharing the patootie’s pictures with us. With every move of the little one making headlines, we wonder the even bigger superstardom that awaits the prince of Pataudi in the years to come! (Do Read: Karanvir Bohra And Teejay Sidhu's Angel Bella Talks To God In A Unique Manner, Videos Inside)

Saif Ali Khan’s majestic Rs 800 crore worth Pataudi Palace is a piece of elegance and marvel. Also known as ‘Ibrahim Kothi’, the magnificent piece of beauty stands tall in Gurugram district in Haryana. Owner of the palace, Saif Ali Khan and his family, are often seen visiting their ancestral home and staying among its people. A few months back, Saif Ali Khan was seen visiting the place with Taimur Ali Khan and wife, Kareena Kapoor Khan, with the little one, piggy-backing on his father. And watching the following video, do not miss out how excited the little Patootie was upon seeing the farm animals! Here’s a glimpse from the same:

And it was only earlier today, what looks like Saif Ali Khan and Kareena Kapoor Khan taking a break from their hectic schedule, were leaving for Pataudi. Shutterbugs captured the awesome-threesome Khan family, decked-up in jeans as they left for their ancestral place. While Saif Ali Khan looked ubercool in a casual tee and jeans, his best accessory was Taimur Ali Khan riding on his abba’s shoulders, who too, was dressed in all denim, with a red cap on his head. Kareena Kapoor Khan looked super-stylish in a pink shirt, bell-bottomed jeans and a stylish brown statement bag in her hand! One look at this family and you are surely going to say out loud, “Oh, what a Khan-daan!” 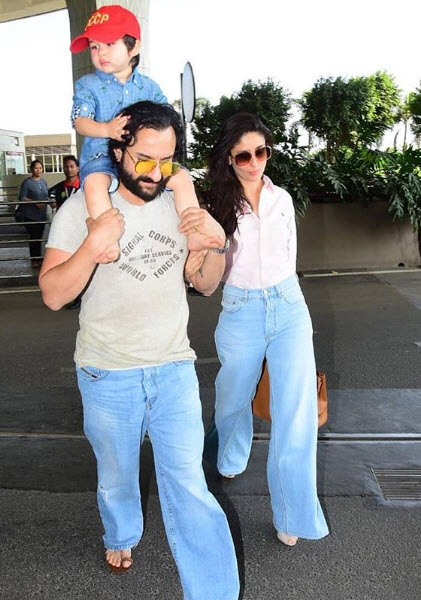 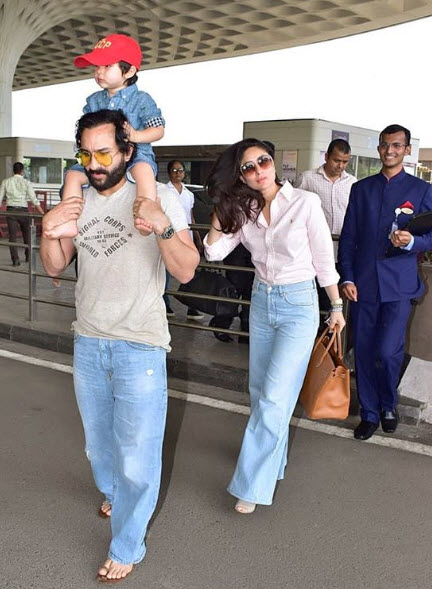 Don’t they look amazing? Kareena Kapoor Khan, in a 2017 interview with Filmfare, had spoken about motherhood, Saif Ali Khan as a father and her star baby, Taimur Ali Khan. Kareena, unlike many other stars, didn’t have any qualms about Taimur being clicked by the paps. Speaking about the same, she had shared, “In today’s times, everyone is seen and is out there. You post pictures on Instagram, on Facebook... because you want to share your life with people. Everyone is posting pictures of themselves at different events, in different outfits, tagging people... I guess nobody can say this is private and this is not anymore. Because everything is pretty much out there. Both Saif and I had spoken about this when I was pregnant as to how we’d handle it. He was like there’s nothing to hide. He’s our child and this is the way it’s going to be. He’s going to be photographed, so be it. It’s convenient for stars when they want to be clicked... at events, putting on make-up, wearing an outfit... So, why are you hiding your child? We’re pretty open about it.” (Must Read: Shaheer Sheikh Enjoys His Ice-Cream Date With Nephew, Aadam, Shares A Cutesy Picture Of The Munchkin) Further talking about Taimur Ali Khan being a pap favourite, mommy, Kareena Kapoor Khan had added, “I do understand that. But I just don’t want him to be looked upon as a star-kid. I want him to grow up as normally as possible. I want to let him be just the way he is.” The Ki & Ka actress had also shared the kind of mommy she is, “Since I’m a first time mother, I’m obviously quite hyper. Obviously, I don’t want to miss out on anything while he’s growing. I wish to be there all the time. I’m loving the journey each day as it unfolds something new. And of course, I’m enjoying being a mother far more than I ever imagined. Being mother to Taimur is probably the most sacred thing in my life. Hope I can be a good one. The journey has just started…” Do you know what Kareena Kapoor Khan does when she needs ‘mommy advice’? She had shared, “Actually, I don’t go to anyone. I pretty much want the experience to be my own. You live and learn. Saif tells me please don’t listen to anyone. There are 10 different views and every mother operates differently from the other. So I listen to everyone but I do my own thing.” 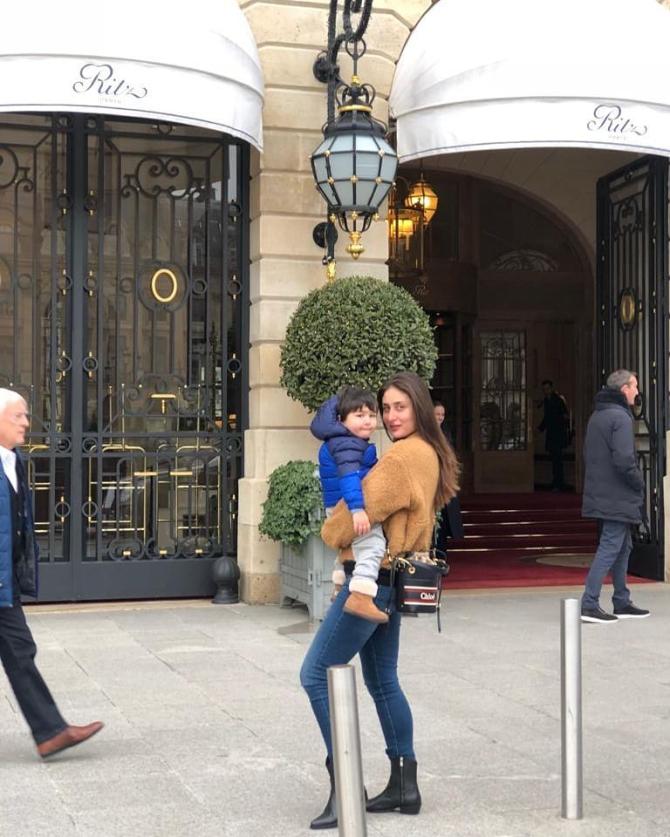 Kareena Kapoor Khan had also spoken about hubby, Saif Ali Khan being a cool father, “Yes. Saif’s been an amazing father to Sara and Ibrahim. They’re at an age where they sit and talk one on one with him, which is beautiful. He’s always there, very attentive. He’s a relaxed guy and he knows his mind. He’s sure of the person he is. That makes him quite a strong ‘father figure’ at home. He’s father to three children and his relationship with each is dramatically different.” (Also Read: Karan Mehra's 22-Month-Old Son, Kavish Is The 'Superstar-In-The-Making', Plays Keyboard With Mommy) Now we know! How did you like the Khan’s ‘enroute to Pataudi palace’ look? Keep us posted!