This cutie patootie is undoubtedly nations’ crush. Having a bad day? Take a look at Taimur Ali Khan’s picture! Want to see a face synonymous to cheesecake? Taimur Ali Khan! Want to know what happens when royalty meets cuteness? Taimur Ali Khan is the answer! Ditto us here? (Do Read: Unseen Picture Of Taimur Ali Khan With Parents Kareena Kapoor Khan And Saif Ali Khan In One Frame)

A few days back, didn’t you go in for a momentary shock when reports started pouring in that Taimur will not be clicked anymore? The world surely sank in for us! Taimur’s abba, Saif Ali Khan turned savior as he later on clarified that nothing of this sort has been said by him and ever since, shutterbugs have been happily clicking and interacting with the ‘apple of everyone’s eyes’, Taimur Ali Khan! 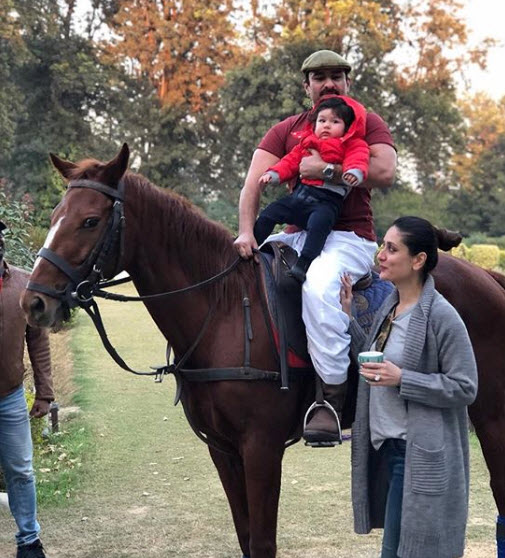 Well, its Monday today after a long weekend for your Diwali holidays and you must be slogging yourself off at work. Worry not, for you will get to see nation’s sensation in a whole new avatar! Every fairytale that you have read must have had a prince riding on a horse, and when it comes to our junior Pataudi prince, how can he be left behind? Last year, we saw Taimur riding on a horseback with his daddy Saif, the munchkin was clicked learning to ride a horse all by himself with an array of instructors by his side! Dressed in a casual black tee with a tiger printed on its front (probably symbolising his grandfather who was fondly called, Tiger Pataudi), and 'Taimur' written at the back of his t-shirt, the star baby looked drool-worthy! Gazing at the pictures, we totally believe that only Taimur Ali Khan can make casual look this royal! Checkout his pictures here: 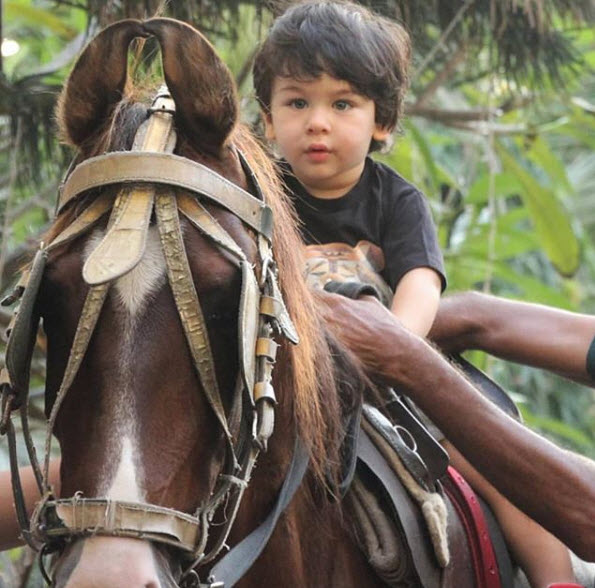 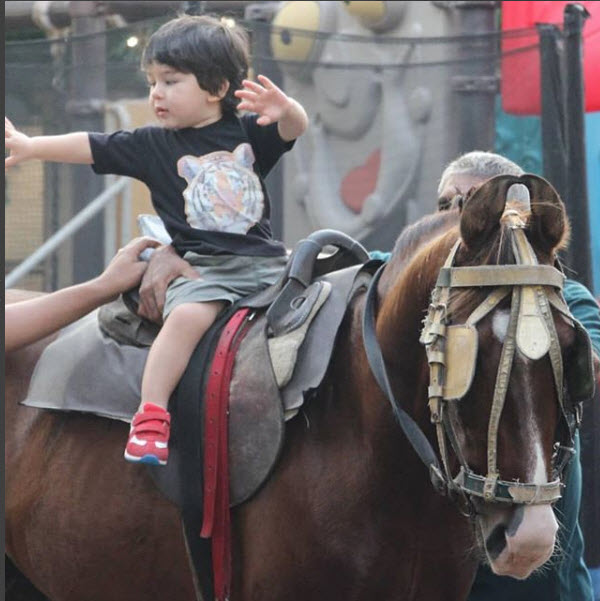 We have literally seen Taimur Ali Khan grow up, isn’t it? From running about in his shorts playing football with his dad, to saying ‘bye’ to the media and interacting with them, Taimur is one jolly child! Sometime back, shutterbugs clicked Taimur calling out his dad and shouting ‘abba’, cuddled in his nanny’s arms. Checkout a video of the same here:

Also, you will hardly see Taimur without his nannies as the little Prince always has someone by his side. In a hilarious picture clicked by shutterbugs, you will see Taimur in his regular evening playtime, having a gala playdate with his friends. In the snap, you will spot little Taimur trying to escape from his nanny’s clutches and making her run behind him! P.S., the expression on their faces are unmissable and be prepared to laugh your heart out! Here you go: (Also Read: Unseen Pic Of Taimur Ali Khan Posing Like A Boss On A Holiday With Kareena Kapoor And Saif Ali Khan)

Speaking of Taimur’s nanny, have you ever imagined the salary that she draws? You will compel to think about your profile twice after to read this media report which says, “Taimur's nanny draws a basic salary of Rs 1.5 lakh a month. It can go up to Rs 1.75 lakh depending on the extra hours she's spent at his home. There is an over-time fee for every extra hour spent with the child. Plus, she has a car at her disposal to take the child in and around Bandra”. To top it all, she always has Taimur around him! Probably, this is what a dream job looks like (quite literally)! 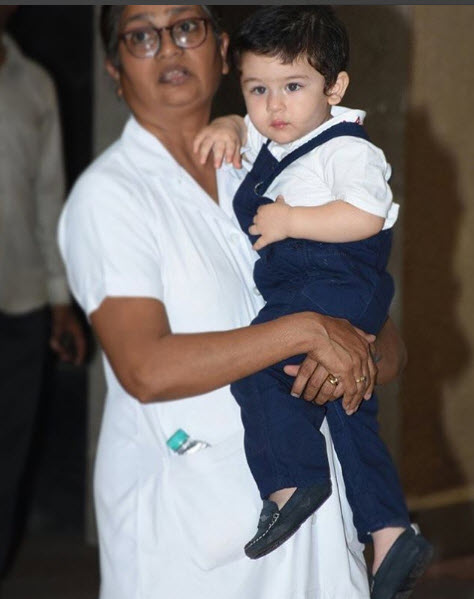 Mamu Ranbir Kapoor, too, is ‘obsessed’ over Taimur. The Sanju star had revealed the same in an interview, “To be honest, I stalk his pictures because I am also obsessed. Because when you see him it just warms your heart. And when he has his haircut or how he walks. I am a Taimur fan.” He further added, “I have had the opportunity and the good fortune to hold him and it felt quite surreal. It felt like holding royalty.” 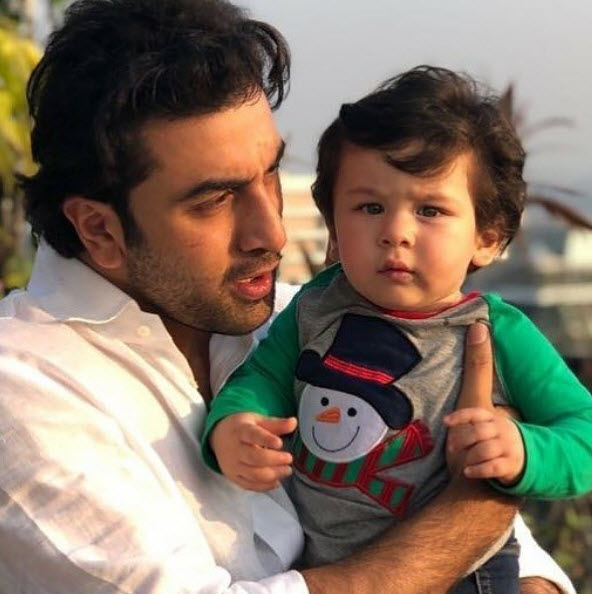 Recently, Saif was busy promoting his latest film, Baazaar. In one of the promotions, he jokingly stated that he once had a discussion with his begum jaan Kareena Kapoor Khan about taking Taimur’s help for the promotions. Saif had stated, “Every producer I am working with is half-jokingly say, "Haha can we put him (for promotions)". With white in his hair (referring to his look from Baazaar). With Kaalakaandi, they wanted to put rubber bands. In Hunter they want to put that Naga Sadhu wig on this poor guy”. He had further added, “My wife (Kareena Kapoor Khan) says, "Don't be so cheap. You can't sell your son (Taimur). I am like, "Why not? Let's sell him." Seriously yaar, he is any way there on the internet. I am just using this platform to say if anybody has any good nappy ads or anything, at a very reasonable price, it's not reasonable, it's quite expensive actually. And, I won't give him the money also. I'll give him some cash for his education, I am already giving it to him. And I'll spend the rest!” (Don't Miss! Kareena Kapoor Khan Celebrated Karva Chauth With Son, Taimur Ali Khan And Her Girl Gang, Pics Inside) 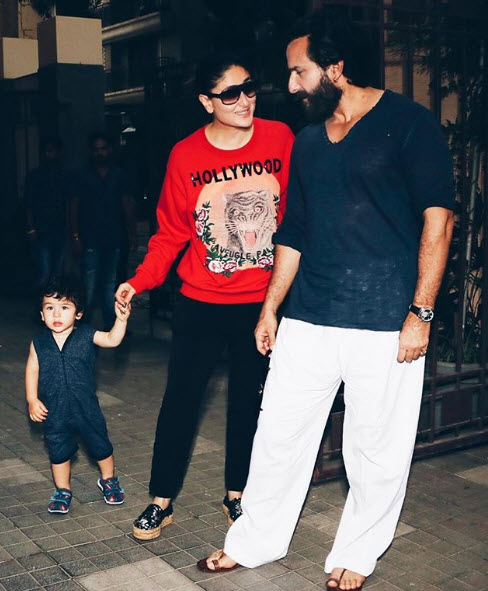 Isn’t Taimur a treat to the eyes? Who is that one person with whom you always talk about Saifeena’s little munchkin? Let us know in the comments section below.