Taimur Ali Khan And Inaaya Naumi Kemmu Meet Up For A Playdate, After Their Exotic Maldives Vacation

Taimur Ali Khan And Inaaya Naumi Kemmu Meet Up For A Playdate, After Their Exotic Maldives Vacation While the Pataudi clan was on their Maldives vacay, everyone here was missing their daily doses of cuteness. But thanks to Soha Ali Khan and Kunal Kemmu, they gave us little sneak peeks from their vacation to drool on. And now, after their exotic Maldives trip, Kareena Kapoor Khan and Saif Ali Khan’s one-and-a-half-year-old munchkin, Taimur Ali Khan and Soha Ali Khan and Kunal Kemmu’s 11-month-old angel, Inaaya Naumi Kemmu are back to spread their joy and happiness around. (Also Read: Kareena Kapoor Khan And Saif Ali Khan To Have Second Baby In 2 Years, She Reveals On A Show [VIDEO])

Well, the cutest and the most adorable brother-sister duo, Taimur and Inaaya were spotted by the paparazzi as they headed for their playdate. While Taimur was accompanied by his nanny, Inaaya looked comfy being cuddled in her mommy, Soha’s arms. Chote Nawab looked dapper in a pink shirt and blue faded jeans with a pair of grey sneakers, and his cousin Inaaya looked adorable in a white frilled tee with printed pants and blue starry printed socks.

Taimur and Inaaya are undoubtedly paparazzi’s favourite and even Soha sharing their pictures time and again, has the nation fall in love with them over and over again. Be it during Raksha Bandhan or their playdates, we have seen Taimur and Inaaya’s bond getting stronger with each passing day. Kareena Kapoor Khan and Soha Ali Khan embraced motherhood with just 10 months apart and became mommies to super-adorable munchkins and nation’s heartbeats, Taimur Ali Khan and Inaaya Naumi Kemmu. 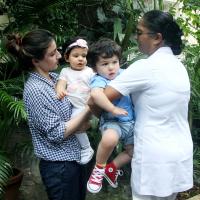 In February, Rang De Basanti fame actress, Soha posted the first much-awaited photo of herself with sister-in-law, Kareena holding their lifelines in their arms and were all smiles for the camera. But Soha didn’t just treat her fans with one pic, she also shared another click of the brother-sister duo, enjoying their playdate sitting together in a toy car, and looking as adorable as ever, or maybe even more! Take a look: 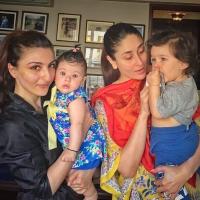 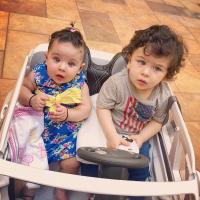 The one-and-a-half-year-old heart-throb (yes!) and his soon-to-be-one-year-old baby sister have a massive fan base, even more than the entire Pataudi and Kapoor clan. Taimur and Inaaya celebrated their first Raksha Bandhan together, and as soon as Soha posted some glimpses from the celebrations, netizens couldn’t handle the overload of cuteness with this adorable siblings group in one frame. Soha shared a candid click of Taimur and Inaaya in their traditional attires, and captioned it, "Stronger together! #rakshabandhan". (Also Read: Inaaya Naumi Kemmu Sends Flying Kiss To Paparazzi, Taimur Ali Khan Goes Cutlery Shopping, See Pics) 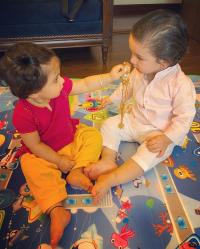 In a throwback interview, Soha revealed how was it the first time when Taimur met his younger sister, Inaaya and they also tried taking a picture together with both the babies in one frame. She had shared, “How does one answer that question? She's two and a half months and he's one. The first time they met, Inaaya was asleep and Taimur was very much awake and screaming and I was worried he was going to wake her up but she slept through it. That was in her room, in her nursery.”

Sharing further about the time when Taimur met Inaaya when both the little kiddies were awake, “We took Inaaya to meet Taimur in his nursery and that's when they were both awake. They looked at each other for the first time. We tried to take a picture where there was Kareena holding Taimur and me holding Inaaya and we tried to get one picture where all of us are looking somewhat human and decent. I don't think we could. We have one picture where Inaaya is looking somewhere else but at least the rest of us are looking normal. It's difficult with babies but they're still coming into their own which is a little bit older. Maybe, her first birthday is when they will be able to interact a little bit more.” (Also Read: Taimur, Inaaya And Mommies, Kareena And Soha's 'Chutti Khatam' Pic Would Make Your Day) 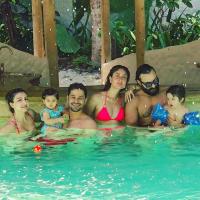 P.S. - Is it only us or every time you see Inaaya Naumi Kemmu and Taimur Ali Khan’s pictures, you are stunned by the uncanny resemblance between the cousins? Do let us know in the comments section below. 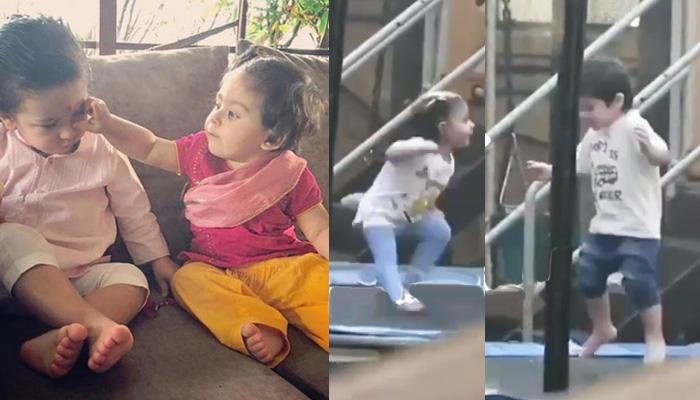