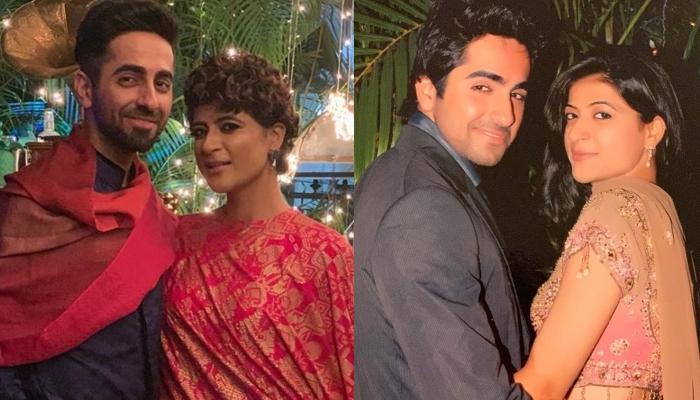 Love is not just a feeling, but rather it is a choice of staying in love, no matter how tough the road gets. It is an unsaid promise you make to each other after a big fight and 'fifty-sixty' years down the line, your love is the only thing that will be remembered as legendry love story. Such is the love shared between Bollywood actor, Ayushmann Khurrana and his wife, Tahira Kashyap. The duo has inspired the millennials with their 21 wonderful years of love and then 11 years of marriage. (Recommend Read: Shehnaaz Gill's Father, Santok Singh Sukh Talks About His Daughter's Linkup With Paras Chhabra)

Ayushmann and Tahira had their own share of ups and downs, they didn't have a 'perfect' love story, yet they had constantly put efforts to turn it into one. A couple of days ago, Tahira had talked about being insecure in an interview with the Hindustan Times. In another media interaction, she had talked about giving up on her marriage but had admired Ayushmann spirits of never giving up on her. That's the beauty of their love, Ayushmann and Tahira have stood for each other in times of need and have shown us that it takes a lot of effort to turn your love story into a 'happily ever after'.

Recently, Tahira made an appearance on Romedy Now's, The Love Laugh Live Show and spilled the beans on her dating phase with Ayushmann. She revealed that they had met each other for the first time while taking physics tuition and for the longest time, she thought his name was 'Abhishek'. Though they never talked to each other, they had an instant crush. Besides this, Tahira also shared that despite dating each other, the duo was very competitive. She had shared that they both used to root for their respective colleges. While their colleges were at a cold war, they used to share a bowl of chowmein outside the premises. (Also Read: Shloka Mehta's Unique Choli With A Gorgeous Pink-Coloured Lehenga Is An Inspiration For Bridesmaids)

In a 2017 interview with the Mid-Day, Ayushmann had talked about his wife, Tahira and how she has been his constant pillar of support. He had said, "When I got married, I had no money. Tahira has been doing better than me professionally for the longest time. She was gutsy enough to marry a man just for love and have faith in his talent. She is a rockstar; she was a professor, had her own PR firm in Chandigarh. She was also the programming head of a radio station in Punjab."

He had further added, "She supported me in every possible way. I was a struggling actor, which is often a gamble. But there was never any ego between us. When there's love, there's no scope for ego. Most men in India aren't secure enough to be comfortable with such an arrangement. It comes with the family. It depends on how your father treats your mother. But a man, no matter where he comes from, could always trigger a change. If it's a patriarchal family, the dynamics are different. In my case, Tahira became the daughter in a household that had none."

Ayushmann and Tahira had gotten married in the year 2011 when he was struggling with his acting career. But then his debut film, Vicky Donor (2012) came and left the entire world in awe of him. This was the time when their marriage had also hit the rough patch. In an interview with SpotboyE, Tahira had talked about the same and had said, “I had a problem with him kissing on screen. I felt like a big, huge fat whale sitting at home. When you are pregnant your hormones also go up and down. Here this boy is looking at his youngest youth best and he is romancing women and what is this onscreen kiss! We both were very young. He didn’t have the time and patience to take me along and I didn’t have the patience to understand. There was this disconnect that we were not there for each other to take each other along in that journey. Somewhere he knew that she doesn’t mean mad. I also knew he wasn’t cheating. I had to evolve as a person to understand what art is." (Don't Miss: Arhaan Khan Confesses His Feelings For Rumoured Ladylove, Rashami Desai Post Eviction From BB House)

Well, we love Ayushmann and Tahira's adorable chemistry! What about you? A woman's entire world changes, the moment she holds her little human being inside the delivery room after enduring a lot of pain. From that moment itself, she promises to be with her baby until her last breath, whether they like or not. The wait of nine months seems too long,