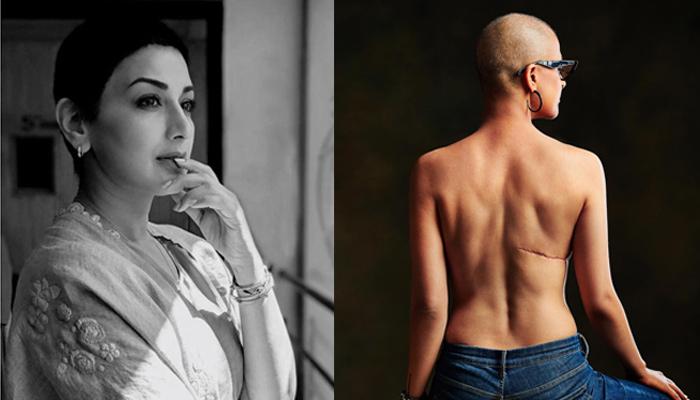 With cancer news of our favourite celebrities spreading like how, every day we shudder to think what’s in next for our B-town celebs. From Sonali Bendre, Rakesh Roshan to Ayushmann Khurrana’s wife, Tahira Kashyap detected with breast cancer, it makes us uneasy when we spot our celebrities in so much of pain, yet spreading positivity and hope in this cancerous air. (Do Read: Sonali Bendre, On World Cancer Day, Shares She Laughed Through Chemo Sessions To Deal With Cancer)

Today (February 4, 2019) is World Cancer Day. We shared with you a few minutes back about how Sonali Bendre is dealing with her metastatic cancer. Reading about how she laughs it off fills us with so much hope! On account of the same, Sonali posted an awareness message about the same on World Cancer Day, “World Cancer Day… who would have thought it would become such a thing… but it has! And just the mere mention of the C word brings dread in the hearts of anyone who hears it. We fear it so much that we’d rather not talk about it… which is why it’s important to have a day where we pull out the band aid and help us deal with this disease. I was scared too, but soon realised that burying my head in the sand was not the way to deal with this.”

The note concluded with, “And so… with the little experience I have had, I urge you all to take the time to understand it. There's more to cancer than being emotional or weak or even being called a fighter or a survivor. It requires you to study it, find out what works for you and to be diligent about your treatment. It requires days of strongly believing in oneself, of knowing that tomorrow will be better than today. It is not a fight against negative thoughts. It's taking a stand to not give in, no matter what. Most importantly, it is about living every day, and not just surviving. Just taking it #OneDayAtATime makes it easier to #SwitchOnTheSunshine. #WorldCancerDay.”

Sonali's hubby, Goldie Behl too, post a heart-warming picture of his wifey and som, Ranveer and captioned it as, "Today is #WorldCancerDay; a reminder that how many people the world over are fighting this ailment. But there is always hope. Let your only mantra be to look for small victories and take everyday #onedayatatime! And make sure you have those care givers around you who make your life a little brighter. Love, care and positivity go a long way in bringing small victories everyday. Be fearless and live positively!"

Tahira Kashyap too, took to Instagram and shared an awe-inspiring picture of herself. The picture has a bare-back Tahira, with a scar right above her left waist, suggesting the removal of her left breast, which Tahira herself had once shared. While we will get to the details later, the Toffee director had also posted an inspiring message for her fans. The message could be read as, “Today is my day! Wish you all a happy #worldcancerday and hope each one of us celebrates this day in an embracing way. That we remove any stigma or taboo associated with it. That we spread awareness about it and that we have self love no matter what. I truly embrace all my scars as they are my badges of honour. There is nothing known as perfect. Happiness lies in truly accepting yourself. This was a tough one for me. But this picture was my decision as I want to celebrate not the disease but the spirit with which I endured.”

The note concluded with, “To quote my mentor, Diasaku Ikeda, “Leading an undefeated life is eternal victory. Not being defeated, never giving up, is actually a greater victory than winning, not being defeated means having the courage to rise to the challenge. However many times we’re knocked down, the important thing is we keep getting up and taking one step-even a half step- forward” #worldcancerday #breastcancerawareness #breastcancerwarrior #turningkarmaintomission #boddhisatva Thanks @atulkasbekar for this one.” (Must Read: Anshula Kapoor's Emotional Birthday Message For Late Mom Mona Kapoor Will Definitely Make You Cry)

Tahira’s way of announcing her breast cancer was so inspiring. She had written, “An opportunity to give competition to the Kardashians just went wasted! A week back I mentioned about ‘my badge of honour’ that I was going to receive. And I did and am happy to share about it with the intention of it being received with love. As that’s the only reason I am posting it. Love for self and gratitude for the universe. The picture might be disturbing for some, but these drains have become my dumbells for a few days. I was detected with DCIS (ductal carcinoma in situ) in my right breast with high grade malignant cells. Simply put stage 0 cancer/ pre-cancerous stage, with cancer cells multiplying in a contained area. The result I have become a half Indian version of Angelina Jolie (since only one breast was involved)!”

It could be further read as, “I told my doctor now is the time to give some competition to the Kardashians since Pamela is passé. But no one listened to me, so now I have a portion of my back tissue in my breast. Perhaps now I can do chin-ups with my breasts! Jokes apart, this obstacle has given me a new definition of life. Respect it’s unpredictability and have the faith and courage to be the hero of your own drama of life. The invincible human spirit is God like, gives you the courage to endure and the will to revive. There is nothing that human spirit can’t do. Also I want women of all ages to be aware. I am 35, and I was returned twice over from a mammogram. If any symptoms come up, think of it as a protective force and get yourselves examined. Also we are so obsessed with boobs. This mastectomy has left me with even more self love! Big, small, left or right inclined, gravity pulling or defying, or even none, each breast the presence or lack of it has a story to tell. Mine has made me a 2.0 version of myself! This post is dedicated to awareness, self-love and resilience of a warrior that I know each one of us possesses #breastcancerawareness #selflove #determination #faith #bodhisattva #bodhisattvaoftheearth.”

Sonali, on the other hand, shared her cancer news as, “Sometimes, when you least expect it, life throws you a curveball. I have recently been diagnosed with a high grade cancer that has metastised, which we frankly did not see coming. A niggling pain led to some tests, which led to this unexpected diagnosis. My family and close friends have rallied around me, providing the best support system that anyone can ask for. I am very blessed and thankful for each of them.”

It concluded with, “There is no better way to tackle this, than to take swift and immediate action. And so, as advised by my doctors, I am currently undergoing a course of treatment in New York. We remain optimistic and I am determined to fight every step of the way. What has helped has been the immense outpouring of love and support I’ve received over the past few days, for which I am very grateful. I’m taking this battle head on, knowing I have the strength of my family and friends behind me.” (Also Read: Ranveer Singh Writes An Open Letter For Wifey, Deepika Padukone, Calls Her The Light Of His Life)

Tahira and Sonali, you both are stronger than you can imagine! By next year, this time around, we hope that you share an ‘all-cured’ message with us. Get well soon!