Sushmita Sen Faces Her Daughters, Renee And Alisah In An Interview, Redefines 'Fear' For Them

Sushmita Sen Faces Her Daughters, Renee And Alisah In An Interview, Redefines 'Fear' For Them

Sushmita Sen gets interviewed by her daughters, Renee and Alisah, and we are in awe of her smart answers. Check out the video inside! 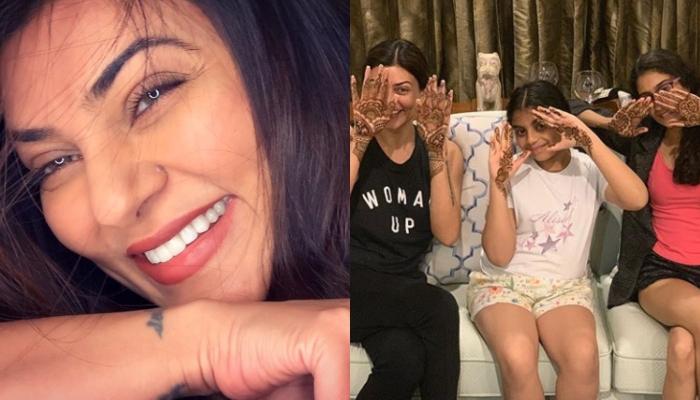 Sushmita Sen is a figure of inspiration for millions of women. At the age of 25, when actresses are dealing with their career and fashion choices, Sushmita had plunged herself into responsibilities by taking the bold step of adopting a little angel, whom she had lovingly named Renee. Shock waves had surged throughout the industry and everyone had lauded her for her brave step. And she didn't stop there, in the year 2010, she had adopted her second daughter, Alisah. (Recommended Read: Sonam Kapoor's Mother, Sunita Kapoor Shares Beautiful Throwback Pictures On Her Second Anniversary)

Sushmita Sen's daughters, Alisah and Renee love and adore her, and the doting mommy also never leaves a chance to flaunt her love for her angels. Sushmita is spending quarantine with her daughters, Alisah and Renee and her boyfriend, Rohman Shawl, and keeps updating her fans about their fun quarantine activities, via her social media handles. Scroll down to get a snippet of an interview of Sushmita by her daughters!

On May 7, 2020, Sushmita Sen took to her Instagram handle to share a very beautiful video of herself being interviewed by her daughter, Alisah and Renee, wherein they ask her some worldly questions. And once again we are stumped by the bong beauty's sheer intellect. They began the interview with the question, "Do you have secrets?" to which Sushmita slyly nodded and said, "Truths and lies and a mixed bag of facts that nobody in the world knows." Then they proceeded to ask what is fear according to her, to which Sushmita retorted, "Fear is a driving force, it has the power to destroy you, or it the power to make you, depends on how you use your fear. Fear is a tool." Indeed, how apt! No wonder Sushmita is called one of the most intelligent actresses of our generation. Sushmita captioned the video as "#love My most cherished interview by Alisah & Renee. #myturn. Entire conversation on #youtube LINK IN BIO. I love you guys!!! #duggadugga." Have a look at the video here:

Sushmita Sen's daughters, Renee and Alisah adore their mother, a proof of which we had seen some days ago when Alisah had made a portrait depicting a mother's pure love. On March 31, 2020, the doting mother, Sushmita had taken to her Instagram stories to share a lovely portrait drawn by her daughter, Alisah. In the portrait, a woman was kissing her baby cuddled in her arms. The portrait was signed by Alisah with the date March 31, 2020. Sushmita had written ‘Alisah and Maa’ atop it with a heart emoticon. (You May Also Like: Sonam Kapoor Ahuja Shares Her 'First Picture Together' With Anand Ahuja On Their Second Anniversary)

The fitness fanatic Sushmita had sown the seed of the same in her daughters as well, after all, the apple doesn't fall far from the tree. Sushmita keeps sharing pictures and videos of her home workout sessions to inspire millions of her fans to do the same. Although, some days ago, Sushmita had posted a picture from one of her home workout sessions and it was very special in every sense! Why? Because her little munchkin, Alisah had joined her in doing a handstand. On April 6, 2020, Sushmita had taken to her Instagram stories and had posted a picture of her doing a handstand with her daughter, Alisah. She had also written a short caption motivating her daughter, which can be read as “If mom can do it, I can do it!! #Alisah.” (Also Read: Parth Samthaan Wishes Rumoured Ex-Girlfriend, Erica Fernandes On Her Birthday, Calls Her 'Cutie')

What question would you like to ask your mom, if given a chance to interview her? Let us know!