While the entire nation was busy celebrating 'Khushiyo wali Diwali', Sushmita Sen celebrated the day with her own family away from the star-studded parties. Scroll down to see her Diwali pictures! 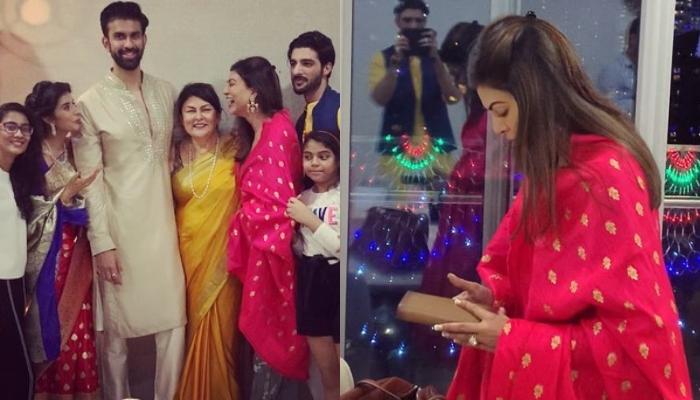 Diwali is the only day that goes away in a blink of an eye. We just cannot believe Diwali 2019 is over but thank god, the Diwali madness hasn't died yet. While we all are back in our office cubicles with the memories of all the last night fun, our social media is buzzing with celebrity Diwali pictures. And oh boy, it is giving us seriously Diwali blues (we know you all can relate to it). Recently we got hold of how former Miss Universe and Bollywood diva, Sushmita Sen celebrated the day. (Recommend Read: Hina-Rocky, Dipika-Shoaib Celebrate Diwali, Other TV Celebs Too Welcome The Festival Of Lights)

Before we take you further, let us take a look at Sushmita's life. At the mere age of twenty-four, Sushmita Sen's entire had world changed when she had decided to take on the journey of motherhood. While many thought it to be an act of charity, in the actress own words, 'it was self-preservation'. She had adopted her first daughter, Renee and then another baby girl, whom she had lovingly named Alisah. Since then her life became more beautiful and the usual dull day became colourful with two little girls and the love of her life, Rohman Shawl.

On October 28, 2019, Sushmita took to her Instagram handle and shared with her fans a glimpse of her Diwali with the whole 'Sen Parivaar' and her man, Rohman Shawl. She posted a series of pictures from the Diwali puja, wherein we can see her mother performing puja with the entire family. She captioned the picture as "Happy Diwali to you and all your loved ones! #duggadugga #maa Alisah, Reneee, @asopacharu @rajeevsen9 @rohmnashawl and #yourstruly I love you guys!" Take a look at the pictures below:

Sushmita also shared lovely videos from her bhabhi, Charu's Lakshmi puja, and along with it wrote, " This was @asopacharu my sister in law’s first Diwali post marriage. Her Lakshmi puja was as beautiful as she is!! Missed you daddy! I love you guys!!!"

Sushmita Sen loves filling up her Instagram with memories and snippets from her life. The actress often shares her thoughts, love and memories with her fans. Coming back to how her life changed post-adoption, she had shared in an interview with the IANS that it wasn't an act of charity but it was rather celebrating motherhood. She had claimed it to be her wisest decision of all time that empowered her and stabilised her life. (Also Read: Samantha Akkineni's Diwali Wish For Fans Is Adorable, Posts A Beautiful Family Picture With In-Laws)

Sushmita had also explained her point further and had said, "In the natural birth, the mother and the child connect through the umbilical cord but in adoption, the mother and the child are connected by this higher power, a connection that you cannot cut off. I have had the privilege of experiencing it twice. To become a mother who has given birth from the heart. I have not missed a day of feeling the joy of motherhood."

In a media interaction, Sushmita had talked about becoming a mother at a young age, and had said, "I know that people say that your best years are your youthful years where you can do films and you look younger etc. I asked myself, 'If I don't do films right now and I focus on this, will I regret it? And if I choose to not be with Alisah and go do films, which one would I regret more?' It was a no-brainer for me." She had further added, "It's not just seeing their first step or first word, that I missed out for Renee. It's their personality development, to witness who they are becoming. I did not sponsor a child. I became a mother. There is a very big difference." (Don't Miss: Samantha Akkineni's Diwali Wish For Fans Is Adorable, Posts A Beautiful Family Picture With In-Laws)

Well, we love Sushmita's Diwali celebration! What about you?