India TV has got hold of a video, wherein, Sara Ali Khan could be seen smoking with Sushant Singh Rajput. Check out the video inside!

Sushant Singh Rajput's death and the conditions around which the tragedy had happened, had raised a lot of unanswered questions. After a nationwide movement of '#CBIForSSR' and '#JusticeForSSR', federal agencies had begun the probe into Sushant's death. Currently, three federal agencies are working the case, the CBI, the NCB and the ED. (Recommended Read: Ekta Kaul Looks Super Cute As She Hogs On Food On Her Wedding Day In This Throwback Video)

To give an update, Sushant's girlfriend, Rhea Chakraborty, was arrested by the NCB on September 8, 2020, under the charges of procurement and consumption of drugs in Sushant's death case. Since then, her bail plea has been rejected twice. Now, as per the reports, Rhea has taken some big names from Bollywood who were involved in the alleged drug procurement and consumption. According to a Times Now report, Rhea Chakraborty has named Sara Ali Khan and Rakul Preet Singh in the list of celebrities who consume drugs. Now, India TV has got hold of a video, wherein, Sara Ali Khan could be seen smoking with Sushant Singh Rajput.

The video in question has Sushant Singh Rajput and Sara Ali Khan chilling and smoking at the balcony of a bungalow. Both of them can be seen smoking. This video was supposedly shot using a drone as Sushant and Sara can be seen in a deep conversation. Smoke can be seen in Sara Ali Khan's hands too. The reports by India TV suggests that the NCB is analysing the authenticity of all these videos. As per the latest update, the NCB might summon the actress soon for questioning.

In another news, Sushant Singh Rajput's manager, Raees, who manages his Lonavala farmhouse has given shocking statements too. In a conversation with India Today, Raees revealed that Sushant and his team, including Sara Ali Khan, and Rhea Chakraborty used to frequently party at the place. Reportedly, a local boatman also told the NCB that Sushant's Lonavala farmhouse was the party destination for the late actor and others. He even named a few Bollywood friends of Sushant, including Rhea Chakraborty, Sara Ali Khan, Shraddha Kapoor, and others. (Also Read: Smriti Khanna And Gautam Gupta's Little Fashionista, Anayka Gupta Turns Five Months Old)

He further alleged that liquor and marijuana were common at the parties. As of now, Lonavala has also fallen under NCB’s scanner in the ongoing probe. Meanwhile, the manager also claimed that smoking papers were ordered for the parties. However, he said that he wasn’t aware of their use. According to him, Sushant Singh Rajput used to visit the farmhouse once or twice a week before the enforcement of the lockdown. He also added that it was Sara Ali Khan who'd come with the late actor initially, although, Rhea Chakraborty also started accompanying them later. Raees also testified that Rhea Chakraborty's family had celebrated her birthday at the farmhouse last year in July. He mentioned that the guests were also served expensive vodka drinks.

Meanwhile, another shocking report by Zee News claims that Sara Ali Khan and Rhea Chakraborty took drugs from each other and not only that, they even had some common drug peddlers. As per the report, during the lockdown, Rhea Chakraborty took drugs from Sara Ali Khan as she is reported to have her high profile private peddler who used to supply drugs. They are also alleged to be connected to some common drug peddlers who have now been arrested by the NCB. At one point, Sara and Rhea were said to have been very good friends and were even spotted together post their gym sessions. (Don't Miss: Sussanne Khan Pens A Cryptic Note On 'Never Looking Back', Ex-Hubby, Hrithik's Comment Is Unmissable)

What do you think about these new revelations in Sushant Singh Rajput's case? Share with us! 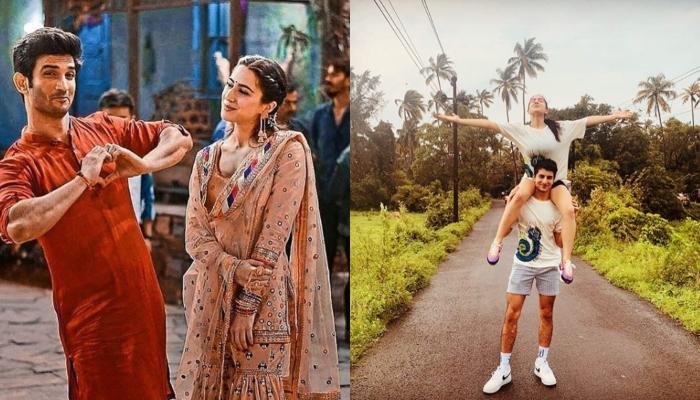 Bollywood actress, Sara Ali khan's name has sprung up in controversies related to Sushant Singh Rajput's death and the probe around it. Some close friends of Sushant had alleged that he was in a relationship with Sara Ali Khan and that their breakup had left Sushant heart-broken. On the other