We came across some mesmerising pictures of Suhana Khan which will make us want to sit back and adore her beauty. She looks beautiful in a halter-blouse and saree!

Indian weddings are fun and full of glee and galore. Preparations begin months in advance and it is always a fun fact that more than the bride/groom themselves, their relatives are more excited about the wedding! What to wear and what to skip, what kind of poses and selfies do we click against what colour-coordinating backdrops, which song will I perform to at the wedding, fill up their mind. While we might be reading this and about to call that person in the family whose turn it is next to get married, King Khan, Shah Rukh Khan’s daughter, Suhana Khan is already going through all the fun! (Do Read: Unseen Throwback Childhood Pictures of Suhana Khan On Her 19th Birthday Are Adorable Beyond Words)

Yes, hardly a day back, we had shared with you some mesmerising pictures of Suhana Khan with her cousins/peers from a mehendi ceremony. The star kid is currently attending the wedding of Gauri Khan’s niece Alia Chhiba, who happens to be the daughter of Vikrant Chhiba. In the pictures that went viral in no time, Suhana had looked beautiful in a pale green salwar kameez. She wore very simple, minimal jewellery and left her hair loose as she posed for pictures in her mehendi-adorned hands. Here’s a picture of the same: 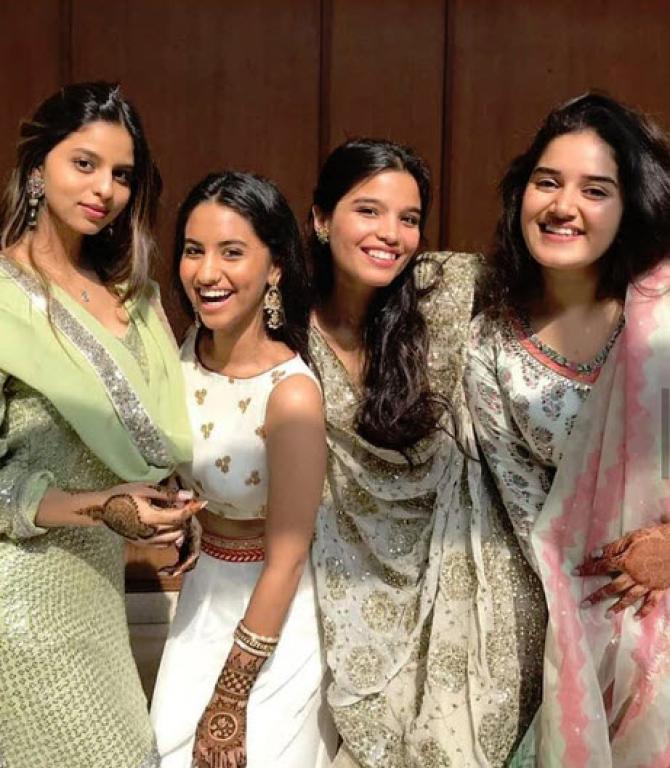 And today, we got our hands on some mesmerising pictures of Suhana Khan, which will make us want to sit back and adore her beauty. In a set of two pictures, Suhana looked resplendent in mehendi-adorned hands, stylish deep-cut, halter-neck, bordered maroon and olive blouse, complementing her saree and similar earrings. The 19-year-old posed with another gorgeous lady and made us want to ask her papa, Shah Rukh Khan “When are we getting to see her in Bollywood?” Take a look at both the pictures here: 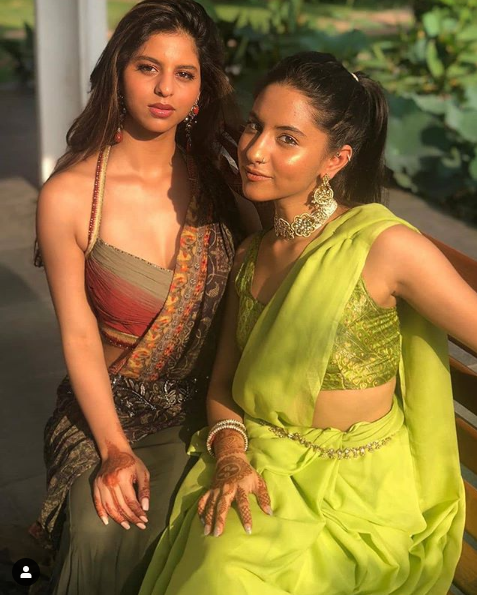 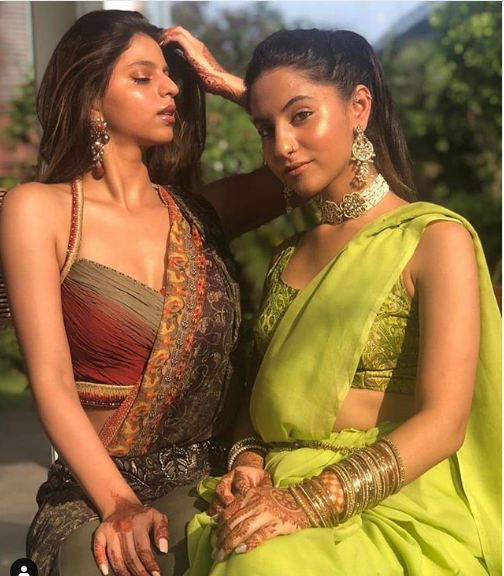 Amazing would be an understatement here! It was last year in August when Suhana Khan made her debut in the glamour world as a Vogue cover girl. Daddy, Shah Rukh Khan had unveiled the cover and had shared, “I hope it is not taken as an entitlement because she happens to be Shah Rukh Khan’s daughter but I hope it is seen as a responsibility that Suhana now has. Thank you very much for giving her this opportunity. She is 18. She is lovely, sensitive, sweet and extremely shy but also extremely strong. And I just want to thank you all who were behind all this and for making her look so nice. I will be proud of her when she is proud of herself and the job that she does and Insha’Allah she will do that.” (Also Read: Suhana Khan Looks Mesmerising In White As She Parties With Friends [Pictures Inside]) 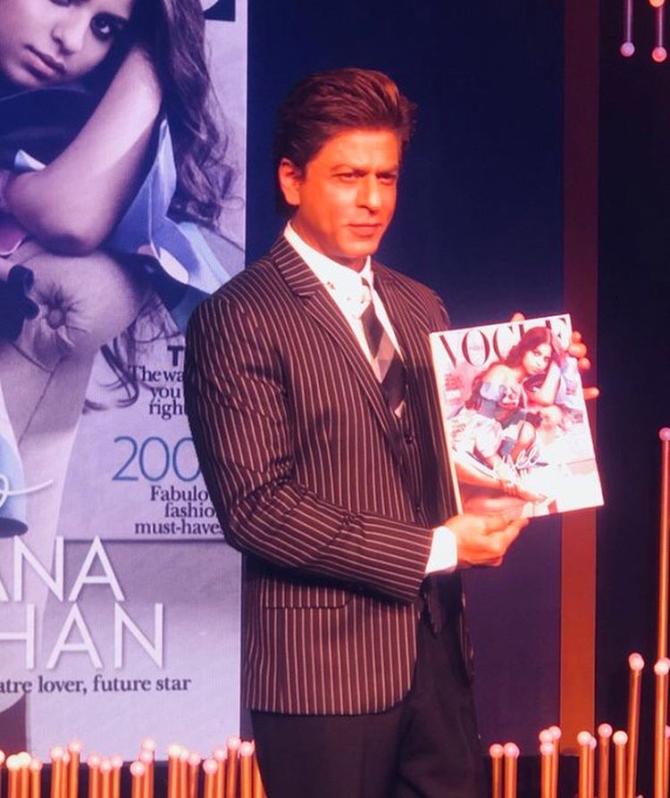 At the Kolkata International Film Festival (KIFF), Shah Rukh Khan was QUOTED as saying this about his daughter, Suhana Khan and became a subject to harsh criticism. This is what he had shared, “I’ll be honest; my daughter is sanwli (dusky), but she’s the most beautiful girl in the world. And nobody can tell me otherwise.” Sharing the news with you all, we had then capitalised the word ‘quoted’ here for a reason, because what Shah Rukh actually said goes like this, “My daughter is sanwli (dusky), AND she’s the most beautiful girl in the world.” He used the word ‘and’ and not ‘but’. 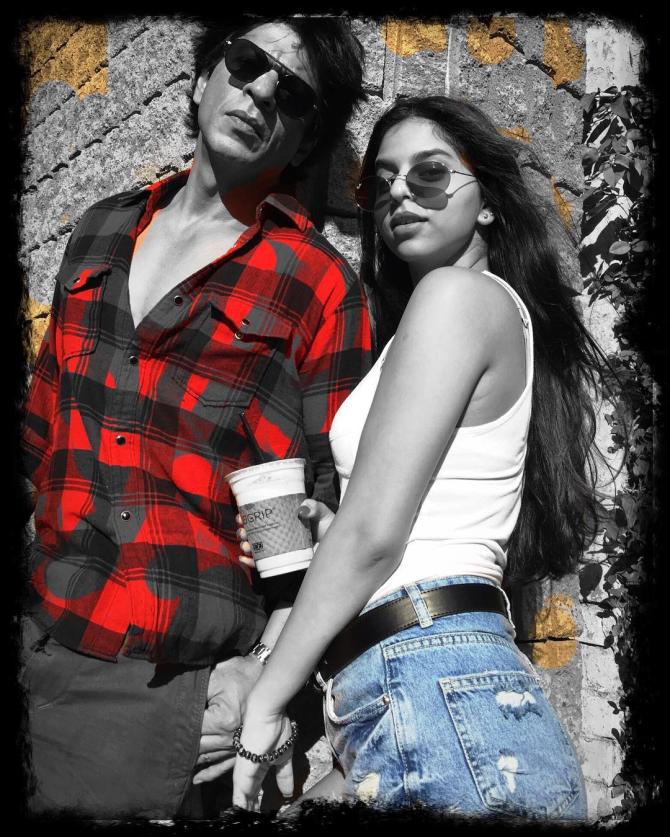 In a throwback interview, Shah Rukh Khan's wife, Gauri Khan was asked about the consequences if Suhana Khan happens to date a struggling actor and wishes to marry him. To this Gauri had replied, “Shah Rukh would catch hold of him and make him sit and bore him to death. He would ask him so many questions and teach him how to act. He would get fed up and run away!" She had further shared, “For him losing his parents at such a young age, Shah Rukh wants to spoil them. He wants to give them everything. He spoils them rotten, I can't do anything. I just have to sit back and complain, like a complaint box." Shah Rukh Khan, being quite a liberal dad, had once spoken about Suhana Khan and acting. In an interview with the DNA, he had shared, “I’d like her (Suhana) to be on the cover of magazines like all my heroines are, wear any kind of clothes she wants to wear, and look sexy and beautiful. I want her to feel attractive, beautiful and respected, and more importantly, I want her to work hard. I have only one mandate where she’s concerned: she can act, but she has to study first.” (Must Read: SRK's Daughter Suhana's 'Mehendi Laga Ke Rakhana' Charm At A Family Wedding Is Going Viral) 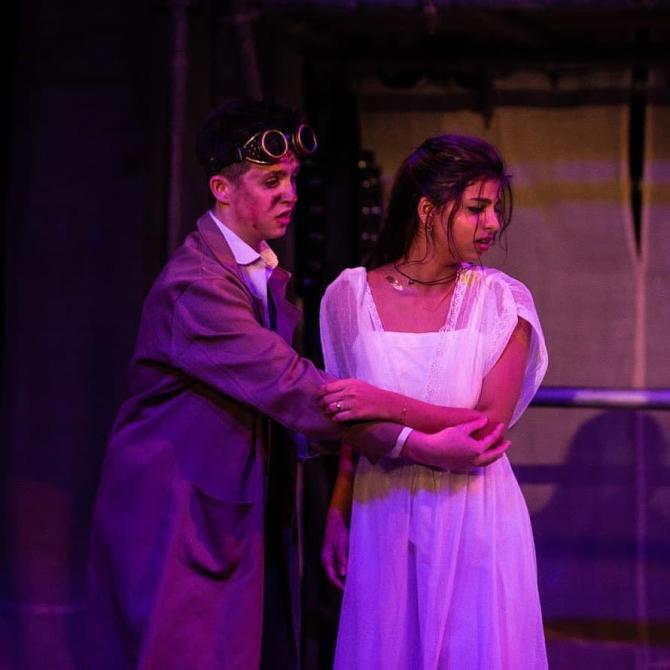 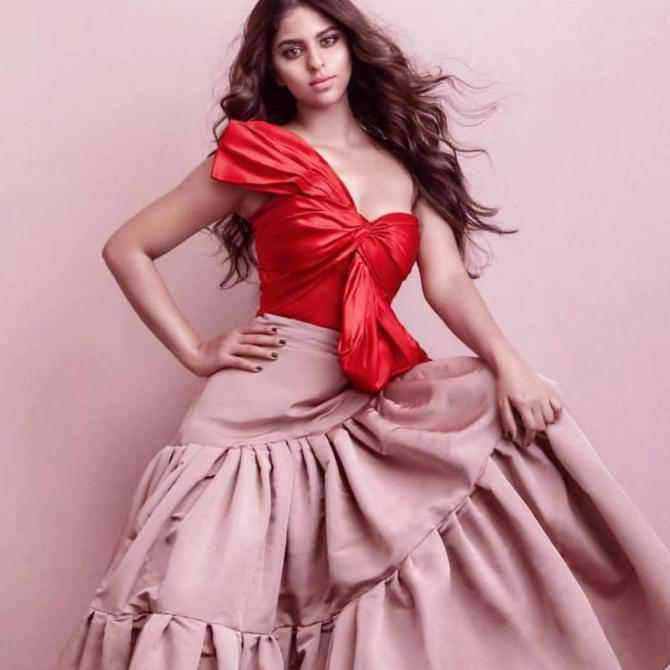 Suhana Khan, you look absolutely gorgeous and we cannot wait to see more of your pictures from the wedding!