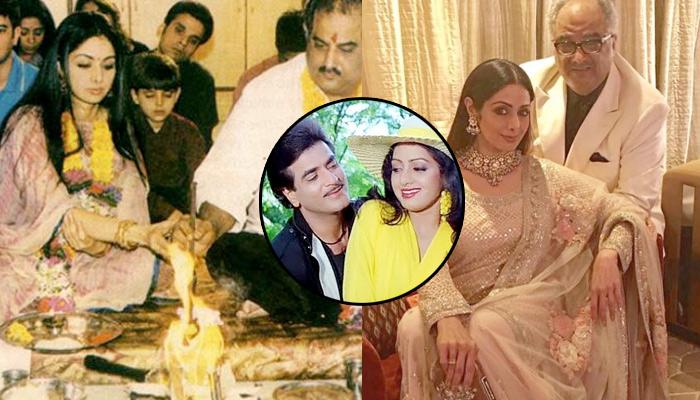 She’s elegant, she’s one of the legendary actresses of Bollywood, and she’s none other than the beautiful Sridevi we are talking about. It isn’t a secret that Sridevi had an affair with the husband Boney Kapoor and she was also pregnant before marriage.

In the year 1996, Sridevi and Boney had a simple temple wedding after her news of pregnancy had spread like fire and she was also known for breaking a happy family as Boney had an extra-marital affair with Sridevi. After his wedding with Sridevi, Boney left his first wife, Mona and kids, Arjun and Anshula. Nevertheless, during those days, even Sridevi was linked to co-star Jeetendra after they worked together in the film Himmatwalla, Jaani Dost and Justice Choudhary.

Suggested Read: Newbie Bride Aashka Reveals One Habit That She Thinks Her Hubby Would Want To Change About Her

There is no doubt about the fact that Sridevi and Boney have been enjoying their married life for more than two decades now, along with their daughters, Jhanvi and Khushi. There is one interesting thing that Sridevi had commented back in 1984 interview and this surely left us speechless and not to miss, to mention here. 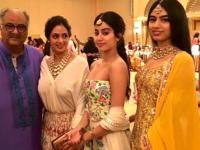 Also Read: Bharti Looks Like A Doll On Her Reception, Wearing Stunning Blue Gown And Only Diamond

During an interview with a leading magazine then, she was asked about her link-up with Jeetendra ji, and this is what she mentioned:

“He is such a nice man, I can never forget how helpful he was on my first day of shooting. I was extremely nervous since Hindi was a new language for me, and my first Hindi film Solva Sawan, hadn’t done well. But Jeetu gave me all the moral support and confidence I needed. He went out of his way to make me feel comfortable by explaining the dialogues to me, and his kind and helpful nature really appealed to me.” 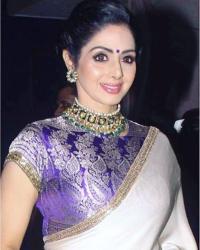 There were rumours that they were staying in the same room and this is how Sridevi retaliated then:

“Never! Honestly, till this day, I have never been to Jeetu’s hotel room, nor has he ever come home. I know people have been saying a lot of bad things, but this is the truth.”

She further added and said:

“I am an innocent girl. I’m not a fool, but I am not a calculative person either. And I am certainly not a man-eater.”

Also Check: When Bharti Was Sweating Out In Gym To Look Slim On Her Wedding,Haarsh's Reaction Was Unexpected 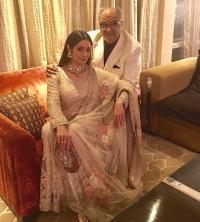 As per the speculations, her strong link-up and rumours affected her family too, this is what she mentioned during the interview:

“It’s not new to me. I’m used to and prepared for things like this. My parents, though conservative, know what this industry is all about. Besides, they have met Jeetu a couple of times and find him a very decent man.”

She went on saying:

“I will never marry a married man.”

You May Like:  Karan Singh Grover Finally Reveals The Real Reason Behind Divorcing His 2nd Wife Jennifer Winget

Adding to her this statement, she also retorted:

“It’s a wrong belief that second wives are a common feature in the South. Even here, it’s a big thing to marry a married man or have a second wife. Everyone gossips about it. People are more conservative in the South than in Bombay.” 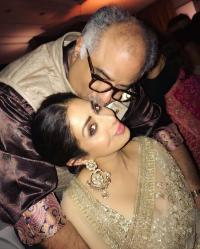 Well, as they say, marriages are made in heaven. However firm Sridevi was while commenting about not marrying a married man in her life, it actually happened vice–versa. Life truly acts funny in everyone’s life and hence, it sets such a true example in Sridevi’s case too.

Nevertheless, we are happy about the fact she’s happy leading a settled life with her married man and husband. We wish Sridevi and Boney, the very best in their life with all the love, luck and happiness always. Stay tuned with us to know more insight about your favourite celebs from B-town and telly world.