Sonam Kapoor's parents, Anil Kapoor and Sunita Kapoor planned a bohemian-themed baby shower for the mommy-to-be. However, it has been interrupted due to some reasons. Check out!

Bollywood actress, Sonam Kapoor is enjoying the beautiful phase of her life, the pregnancy period with her husband, Anand Ahuja and her doting family. To pamper the mommy-to-be, her family is leaving no stone unturned. Currently, she is in India, and her family has been planning a boho-themed grand baby shower for her, which due to some reasons has been interrupted. For the unversed, Sonam and Anand had announced her pregnancy news on March 22, 2022, wherein she was seen flaunting her cute baby bump while laying on papa-to-be's lap.

On July 14, 2022, Sonam Kapoor was spotted in the town, and the mommy-to-be had left us in awe with her dazzling look. Sonam stunned in a yellow-coloured dress paired with dramatic sleeves. She completed her lookbook with dewy makeup, winged eyeliner and a wavy hairdo. The gorgeous actress also flaunted her fully-grown baby bump, and it was simply unmissable. Check it out below:

As per reports, Sonam Kapoor's bohemian-themed baby shower planned by her parents, Anil Kapoor and Sunita Ahuja had to be called off due to Covid-related restrictions. A source close to the family reported to Etimes that although customised hampers and invitation cards have already been sent out to many guests, the plans are interrupted with the increase of Covid cases, and following this, certain restrictions are imparted on celebrations. However, no such confirmation is given by the mommy-to-be or her family.

For those who don't know, Anil Kapoor and his wife, Sunita Kapoor were all set to host their daughter, Sonam Kapoor’s baby shower at her maasi, Kavita Singh’s home at Bandstand. The event was going to be indeed a grand one, and preparations for the same had begun with sending lavish invites to the big names in B-town and their friends and relatives. On June 13, 2022, the paps had spotted the fancy invitations outside the Kapoor's residence, for the baby shower being taken out for sending to the guests. The lavish invites had featured many delicacies, snacks, sweets, and some soft drinks, among other gifts. Each invitation was wrapped in cream-coloured printed wrapping paper, and it was simply classy. Check it out below:

Recommended Read: Madhuri Dixit's Son Arin Nene On Living Away From Family In A Dorm With 40 Boys And No Air Condition

As per a report by Pinkvilla, Sonam Kapoor’s grand Bohemian-themed baby shower was to be designed by her BFF and fashion designer, Masaba Gupta. And according to reports, Sonam's baby shower was to be attended by Bollywood's who's who. Apart from the Kapoor family members, Swara Bhasker, Kareena Kapoor Khan, Karisma Kapoor, Amrita Arora, Malaika Arora, Alia Bhatt, Natasha Dalal, Jacqueline Fernandez, Deepika Padukone, Masaba Gupta and Rani Mukerji were also invited for the party. 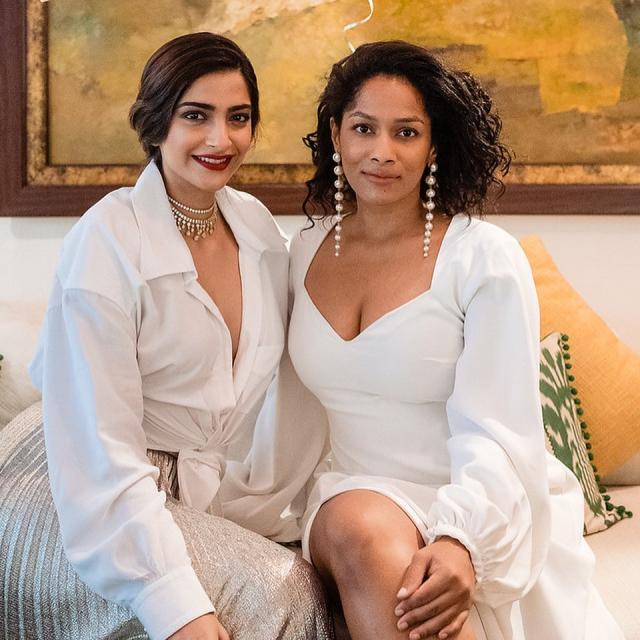 Well, we are still excited to get a glimpse of Sonam's baby shower. What about you? Let us know. Bollywood actress, Sonam Kapoor, daughter of Anil Kapoor and Sunita Kapoor has been living her dream life. From being a successful actress to marrying the love of her life, Anand Ahuja, to almost stepping into the motherhood phase, Sonam's life has been quite busy. As the mommy-to-be is enjoying her