Bollywood actress, Sonam Kapoor Ahuja wished her 'Raanjhanaa' and 'Veere Di Wedding' co-star, Swara Bhaskar on her 33rd birthday with some unseen pictures from her 'sangeet' ceremony and wedding day.

Bollywood actress, Swara Bhaskar is celebrating her 33rd birthday today and just like her every birthday in recent years, her close friend and Veere Di Wedding co-star, Sonam Kapoor Ahuja, has penned a super-special birthday wish for her. Everyone is aware of the beautiful bond that Sonam and Swara share since their first meeting on the sets of their first film together, Raanjhanaa. Whether it's about Sonam giving some cool sartorial ideas to Swara or the latter standing like a pillar for Sonam, the two actresses are among the best BFF duos in the entertainment industry.

Recommended Read: 6 Celeb Mommies Who Opted For Prenatal Yoga To Stay Happy And Healthy During Pregnancy

Bollywood actress, Sonam Kapoor Ahuja's sangeet ceremony was held on May 6, 2018, and it was her BFF, Swara Bhaskar, who had ruled the headlines for her glamorous look and had given us some major outfit goals for our BFF's wedding. The actress could be seen donning a white and gold thread work lehenga inspired from Kashmir by Manish Malhotra, and her mehendi clad hands had just completed her look in the best way possible. 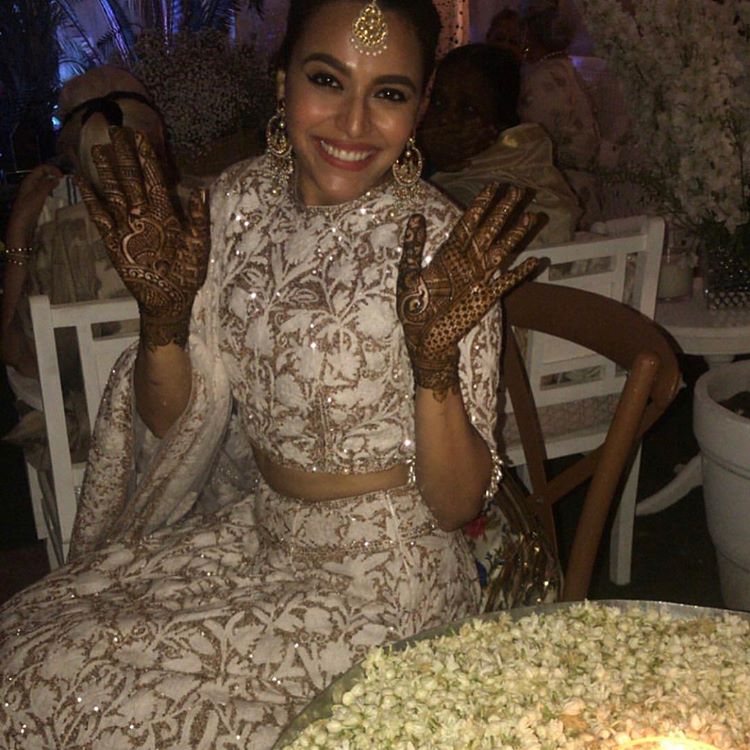 On April 9, 2021, Sonam Kapoor Ahuja took to her Instagram handle and wished her one of the favourite co-stars, Swara Bhaskar, with whom she had starred in multiple films like Raanjhanaa, Prem Ratan Dhan Payo, and Veere Di Wedding. The actress shared a heart-melting birthday wish for her sister-alike-friend with some unseen pictures from her wedding ceremonies. While the first picture was from Sonam's sangeet ceremony in which, the two looked gorgeous in their respective outfits, the second one was from Sonam's D-day, where she could be seen posing for the camera with her sister, Rhea Kapoor and Swara. Along with these stunning pictures, Sonam penned a beautiful note, and it can be read as "Dear Behen, we just spoke a day before, and I realised that our friendship is a godsend. Sakshi, Bindiya and Chandrika... of every person you've essayed, my favourite remains the one you are off-screen. May your voice only amplify with time, love you lots. Happy happy birthday, Swaru. @reallyswara." After some hours, the birthday girl, Swara Bhaskar took to her IG stories and shared her close friend, Sonam Kapoor Ahuja's heart-melting birthday wish with a cutesy reply. She wrote, "Love you Sonam! Dost, behen, dispenser of advice: both sartorial and arterial" atop it. The actress also shared a glimpse of her birthday-eve celebrations on her IG handle and revealed how her parents and friends made her day super-special with a cutesy surprise. Swara shared a long video in which she can be seen cutting some birthday cakes, and the loud cheer from her loved ones spoke everything about their love for the actress. Along with the video, Swara penned a thanking note in the caption, and it can be read as "Birthday surprise! My parents & colleagues organised a celebration, on the eve of my birthday, in advance, so I get surprised! And boy was I surprised!! I'm the luckiest person in the world to have these parents, this family & these friends." For the unversed, Sonam Kapoor Ahuja and Swara Bhaskar share an extremely close and concrete bond. Time, and again we have seen them showering love on each other with their heartfelt posts on social media and stunning meet-up pictures. For instance, on Sonam Kapoor's birthday last year, i.e., June 9, 2020, her close friend, Swara had shared a still from their film, Raanjhanaa, along with an emotional note, and it could be read as "Happy happy birthday Sonammmmmmmmmmmmmm! @sonamkapoor You are among the most wonderful, kind, generous people I know! And the sassiest and funnest! Stay blessed and spread your light! I've learnt so much from you, about being a better, more decent, more generous colleague and friend. I love uuuuuu! Happy birthday again! P.s. This pic is from the first few days of us meeting, #Raanjhanaa shoot. SO glad to have met uuuuuu!." Take a look: