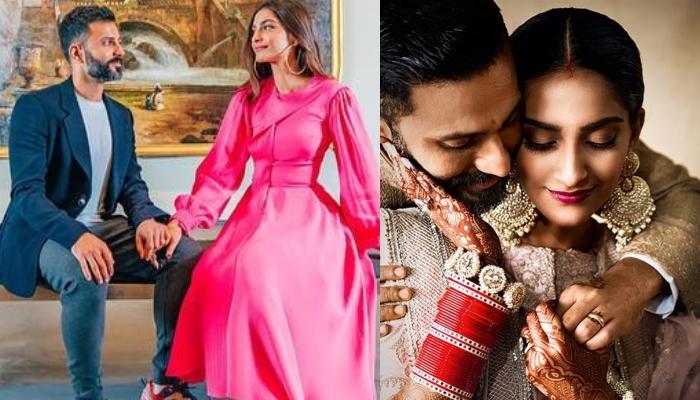 The comedy king, Kapil Sharma is back at ruling hearts with his high-voltage comedy show, The Kapil Sharma Show. While Kapil never fails to make a mark with his on-point joke, this weekend he will get a mum as Bollywood’s very own jhakkas boy, Anil Kapoor and his fashionista daughter, Sonam Kapoor along with Rajkummar Rao and Juhi Chawla are going to be part of the show. (Recommend Read: Sanjay Dutt Brutally Trolled For Discriminating Between Trishala And Iqra On National Girl Child Day)

The much-anticipated episode will see all these stars at their hilarious best! And, the newly-married actress, Sonam Kapoor will also share an interesting story of her husband, Anand Ahuja. The actress revealed that post her wedding with Anand, she was wearing choodas which left her husband clueless about the tradition he had no idea about. Anand reacted by saying, “What are you wearing”. Sonam then told him about the tradition, following which, Anand asked her to remove it, as they were not going with Sonam’s outfits.

Well, Sonam ki shaadi saga didn’t end there, the actress shared another instance from the wedding which was about the joote chupane ki rasam. She revealed that when she and her friend, Swara Bhaskar planned to hide Anand’s shoes, Anand played smartly and fooled Swara into stealing his brother’s shoes. However, Swara did manage to get money from Anand as a part of shagun. (Also Read: Divyanka Tripathi And Vivek Dahiya's 'Inspiring' Social Media Romance Makes Us Say 'Nazar Na Lage')

Earlier, in an interview with Vogue, Sonam had revealed the first date details. The actress said, “I was apparently wearing the worst sneakers he had ever seen. I keep telling him that he fell in love with me despite my bad sneaker game… That day, walking and talking in London, I knew he was the love of my life. He apparently knew the first time we spoke on the phone… It was just so easy”.

In the same interview, Sonam talked about her love story with Anand, she had quipped, “He makes clothes—and I wear them!” She further added, “He comes from a business background, so that’s alien to me. I’m the third generation in a film family. So there’s a lot to talk about, a lot to discover about each other, but we have a lot of similarities.” Sonam also shared the qualities of her husband, and said, “He’s non-judgemental—with everybody. Very open-minded and progressive. I’m a little conservative and close-minded about a few things, and he’s taught me to see the other side, to look at things with a lot more compassion and care, to be a little more pragmatic and practical, as I can be very emotional and quick to judge sometimes, which is not nice” (You May Also Like: Mohena Kumari Singh Reveals Details About Her Politician Would-Be-Husband, Shares Marriage Plans)

In another interview, Sonam had shared the details of her Anand’s name change. She said, “Anand and I had a very long conversation you know, and we obviously want to have kids eventually, and he had this one friend who had a very long name, his mother’s name, father’s name, blah blah blah. I said, see anyways it’s a patriarchal concept, I have my father’s last name, I don’t have my mother’s name, and I want to be part of your family as well, and he wanted to be a part of mine”.

Sonam also talked about life after wedding and how it had changed, and stated, “It’s the same thing. Life doesn’t change much after marriage. It doesn’t change for a man. So, why should it be different for a woman where work is concerned?”

In an interaction with Filmfare, Anand also revealed the secret of how they are managing their long-distance marriage. He was quoted as saying, “When it comes to marriage, small things matter a lot. We eat meals together, even if we are in different time zones, on Skype. We also actively make sure that we don’t go over two weeks without seeing each other.” (Don't Miss: Esha Deol's Daughter, Radhya Ran To Her 'Naani', Hema Malini During A Shoot And Then This Happened)

Well, we just cannot wait for the episode to get air!