Sonam Wore Gorgeous Kaliras On Her Chooda Ceremony, Did Kaliras Fall On Janhvi Kapoor? Watch Out

Sonam Wore Gorgeous Kaliras On Her Chooda Ceremony, Did Kaliras Fall On Janhvi Kapoor? Watch Out 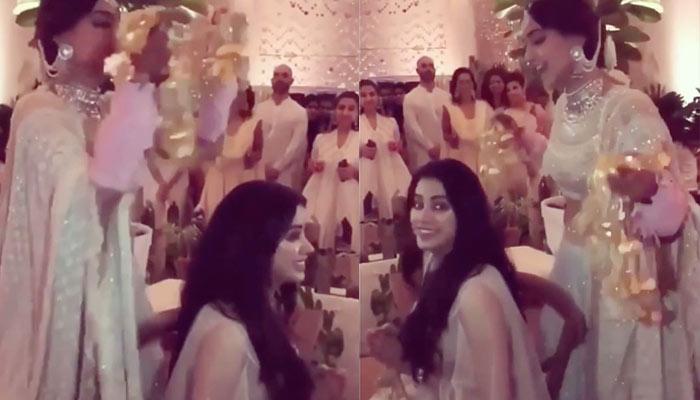 Wedding trends are not persistent as every bride works her whole life to make her D-day a special one. And when it is a celebrity wedding, we can expect some major leap in the benchmarks of fashion, glamour and style. One of the most essential parts of a Punjabi bride ensemble is her chooda and kalire. (Also Read: B-Town Celebs At 'Sonam Ka Sangeet', Raise Fashion Quotient With The 'Shades Of White' Outfits)

And one of the most important ceremonies in the big fat Punjabi wedding is the kalire ceremony in which the bride shakes off the kalire on the heads of unmarried girls, be it her cousins or friends. And if any part or leaf of the kalire drops off on them, they are most likely to get married next. Now you must be wondering why are we filling you with all these information. Well because, B-town’s diva and our favourite Punjabi bride, Sonam Kapoor is getting hitched to her long-time beau, Anand Ahuja on May 8, 2018. 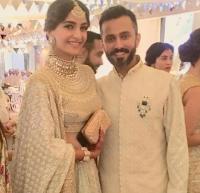 The celebrations have begun and so does all the rituals and fun. After the mehendi ceremony, Sonam had her chooda ceremony in the evening today, and we can see her flaunting her kalire at her mehendi function that is going on right now. In an Insta story shared by Sonam’s BFF, Jacqueline Fernandez, we can see bride-to-be Sonam flaunting her kalires and grooving with her bestie to the track, Chittiyaan Kalaiyaan from the film, Roy.

A post shared by BollywoodIndialove (@bollywoodindialove) on May 7, 2018 at 7:43am PDT

Don’t these besties look adorable in this video? In another Insta story by Pooja Dhingra streaming online, Sonam Kapoor is seen enthusiastically doing the kalire ritual. Sonam is trying hard to drop off the kalires on her but Pooja got lucky and captioned her Insta story, “Look, I’m staying single.” Check out the video here:

In a picture of Sonam with Katrina Kaif, in which they are all smiles for the camera, we can see Sonam flaunting her floral neckpiece and floral haathphools.Along with the traditional golden kalires, Sonam is also wearing floral kalires. The next target in the kalire ceremony is none other than Sonam’s cousin, Janhvi Kapoor. In the video Janhvi is praying the kalires and don’t fall off on her and what happened, check it out here: (Don't Miss! First Look Of Sonam Kapoor-Anand Ahuja From Sangeet, Looks Resplendent In Gold 'Chikankari' Lehenga)

How cutely Sonam says, “Sorry Jaanu” and Janhvi is now definitely not next in the line for big fat Punjabi wedding in the Kapoor family. Sonam looks resplendent in all her ethnic looks and she believes that traditional never goes out of fashion. In a February 2018 interview with the Brides Today magazine, Sonam Kapoor was quoted as saying, “I don’t like fashion pieces. I like beautiful, traditional Indian clothes, that don’t go out of style”.

We are totally in love with the bride-to-be, Sonam Kapoor and her awe-inspiring pre-bridal looks. Stay tuned for more picture for the #EverydayPhenomenal #sonamkishaadi!

Next Read: 'Chacha' Sanjay Kapoor Has The Most Emotional Message For Niece Sonam Kapoor On Her Wedding