Sonam Kapoor and Arjun Kapoor are of the same age, and sure have some fun memories to cherish. Sonam wished him with a beautiful note and a series of throwback memories. Check out!

When it is the birthday of your family member or someone you love, you put in your every best effort to make their birthday wonderful. You look out for out of the box ideas to make their day memorable. However, the on-going pandemic has made every birthday already memorable as people are not being able to celebrate their happiness, yet people still try out their best to make their day happy. (Recommended Read: Avika Gor Is Excited As Her BFF, Manish Raisinghan Is Getting Married On Her Birthday With His Love) 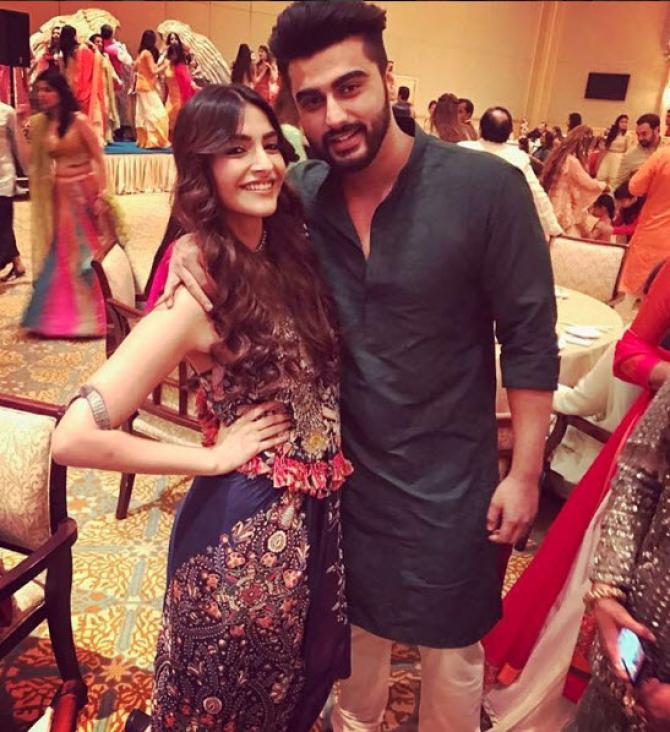 On June 26, 2020, Sonam Kapoor took to her Instagram handle to share two beautiful pictures with Arjun Kapoor. Sonam shared two pictures with Arjun Kapoor from her wedding ceremonies. In one picture, Arjun can be seen tightly hugging Sonam Kapoor, whereas, in the other picture, it looks like Sonam is going to hug Arjun. Writing down the birthday wish, Sonam mentioned how Arjun brings laughter and wisdom into the room despite all the things he has been through. She wrote, “Happy happy birthday my darling brother.. you bring so much laughter and wisdom into our lives despite what you’ve gone through. Thanks for always being in my corner no matter what antics I’m up to. Love you lots brother dear.” Take a look: 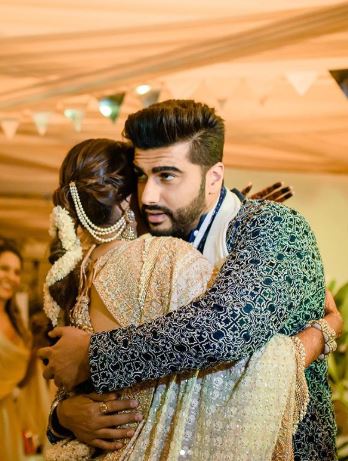 Sonam did not stop there only to wish her cousin brother, Arjun. Sonam shared an array of pictures with Arjun on her IG stories. The series of pictures on her IG stories look like a timeline of their bond since childhood to now. Sonam Kapoor started off with their childhood pictures and shared the picture from every time space of their life till now. Take a look at the screenshots: 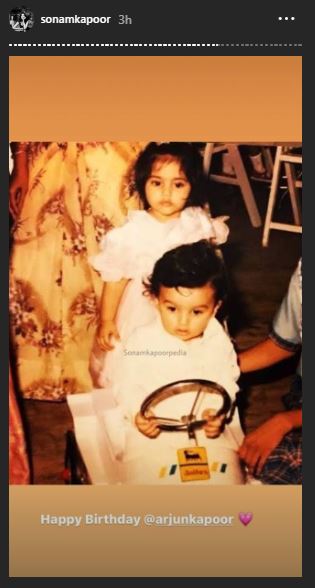 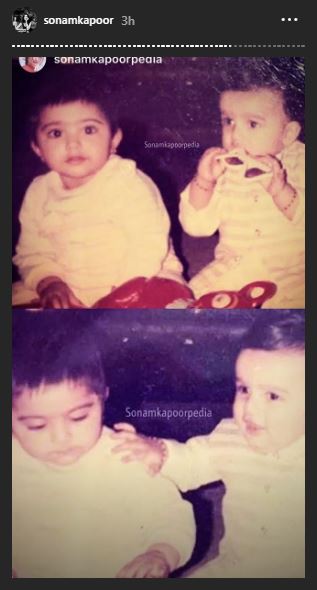 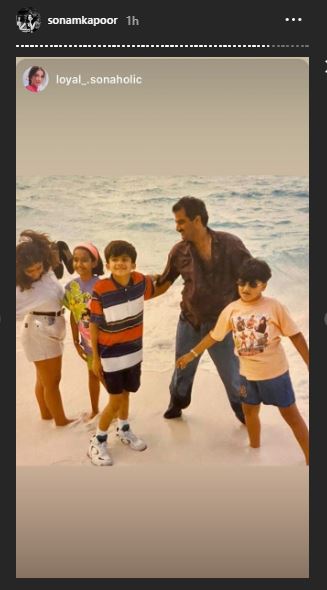 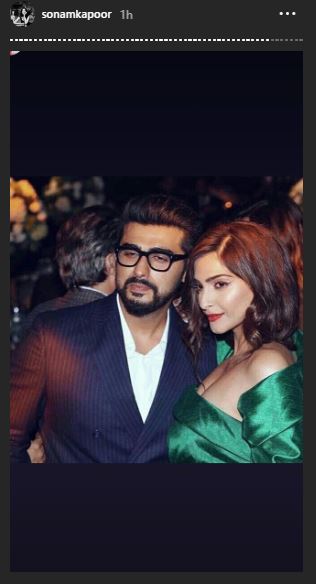 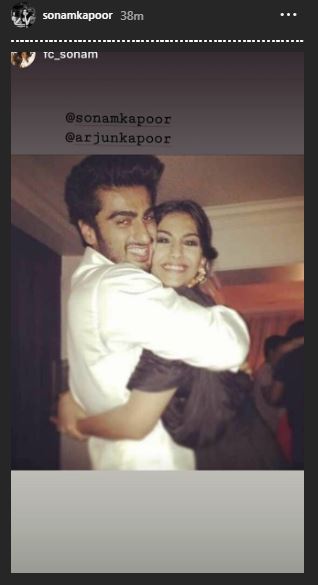 Sonam Kapoor's little sister, Rhea Kapoor also took to her Instagram stories to wish her big brother, Arjun Kapoor. Rhea shared a series of pictures of Arjun to wish him on his birthday. In the first picture, we can see Arjun Kapoor having a conversation with Rhea's boyfriend, Karan Boolani, she wrote, “HAPPY BIRTHDAY BIG BROTHER @ARJUNKAPOOR.” atop it. The second picture is of Arjun Kapoor with the Kapoor family. She captioned it as “@ARJUNKAPOOR WE BEEN THROUGH IT ALL, UPS AND DOWNS, MOMENTS OF HILARIOUS SILENCE, WEIRD UNBELIEVABLE SHIT ONLY REALITY CAN THROW AT YOU AND THROUGH IT ALL YOU’VE BEEN GROWING INTO AN EVEN KINDER AND LOVING SOUL.” While her third and the last story is a solo picture of Arjun Kapoor, atop it she wrote, "I WISH YOU EVERYTHING YOU WANT IN LIFE AND MORE, EVEN THOUGH I KNOW YOU’LL FIGHT FOR IT ALWAYS ANYWAY! LOVE YOU BROTHER! HAPPY BIRTHDAY!” 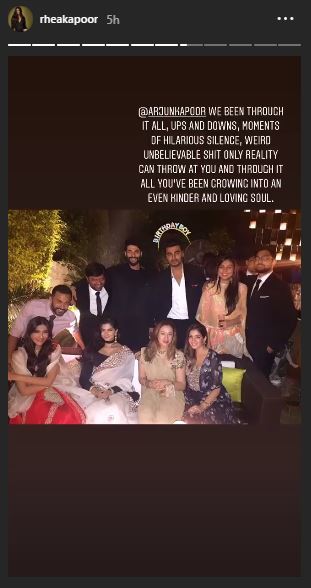 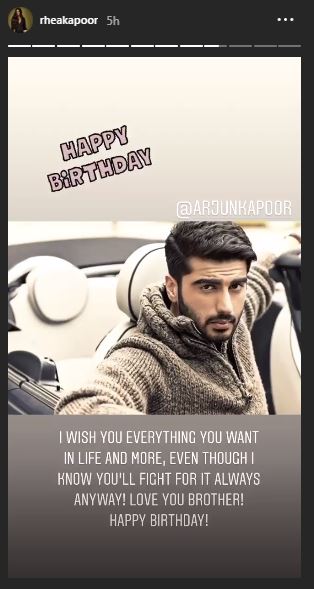 Arjun Kapoor's chachu, Anil Kapoor also wished him on his social media handle. Taking to his Twitter handle, he tweeted, "Happy Birthday Chachu, @arjunk26!! You always make all the people in your life feel loved and cared for.. It's my favorite thing about you! Here's to many more years of positivity, fun, humour and all the other madness that ensues when we get together!” Take a look at his tweet:

Happy Birthday Chachu, @arjunk26!!
You always make all the people in your life feel loved and cared for.. It's my favorite thing about you!
Here's to many more years of positivity, fun, humour and all the other madness that ensues when we get together! pic.twitter.com/mrmtQaZz3k — Anil Kapoor (@AnilKapoor) June 26, 2020

Arjun Kapoor’s real sister, Anshula Kapoor too had ensured that her brother’s birthday doesn’t go unnoticed. Taking to her Instagram handle, Anshula had poured down her heartfelt feelings for her brother. Wishing Arjun, Anshula had started her note with how he is the most important person in her life. She had written, “Happy birthday @arjunkapoor. You are the reason I breathe, my most favorite human and the most important person in my life. The man whose love knows no bounds, who has always made me feel like the most cherished person on earth.” (Don't Miss: Sumeet Vyas Shares A Glimpse Of His Newborn Son, Ved With His Mommy, Ekta Kaul) 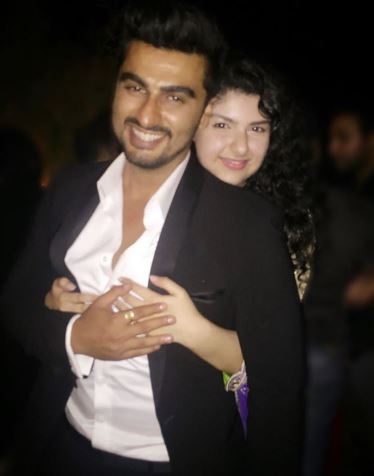 Anshula had also talked about how her brother, Arjun Kapoor has been her source of strength post the demise of their mother, Mona Kapoor. She had continued, “You’ve never let us forget mom, but you make me feel whole even with her loss, and you have the ability to make me miss her less every time I feel like I can’t breathe without her. You’ve given me everything under the stars - even more than I ask for, perhaps more than I deserve - and somehow you always know what I need, even before I know I need it. You’ve moved heaven and earth to make sure I’m taken care of and loved.”

She had concluded her note saying, “For this and for infinite more reasons, You are my number one, the best person I know, my anchor, my North Star, my most favorite human, my heartbeat, and the best gift mom could have given me. I don’t ever want to live in a world that you’re not in. Love you to infinity. I’ve got your back, and you’ve got mine. Always and forever.” (Also Read: Sushant Singh Rajput's Father Reveals Actor's Relationship With Ex, Ankita Lokhande And His Marriage) 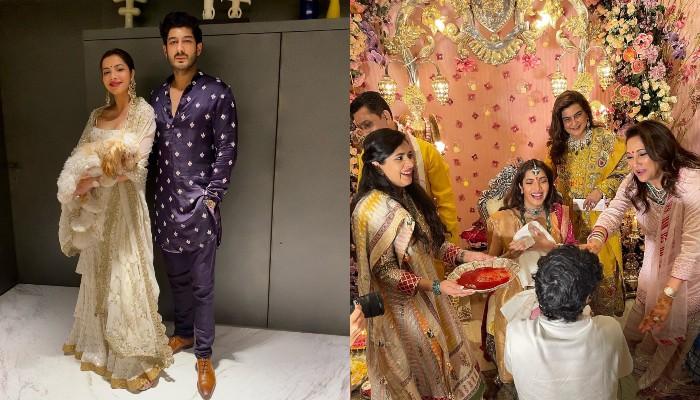 The members of the Kapoor khandaan are in full celebration mode as one good news after another is on their way. First, it was Anil Kapoor's younger daughter, Rhea Kapoor's hush-hush private wedding, and now it is Mohit Marwah's wife, Antara Motiwala Marwah's baby shower. For the uninitiated, Mohit's mother,