Sonam Kapoor Ahuja took a walk down the memory lane and shared unseen pictures from her mehendi and wedding reception on her FIL's birthday. Scroll down to check them out!

The marriage of Bollywood's fashion icon, Sonam Kapoor Ahuja had filled the columns of Bollywood and fashion magazines for days on end. The grandeur of the Kapoor-Ahuja wedding ceremony was such, that it is still talked about today! Sonam Kapoor Ahuja took a walk down the memory lane and shared unseen pictures from her mehendi and wedding reception on her FIL's birthday! (Recommended Read: Shilpa Shetty Kundra Misses Her Sister Shamita Shetty, Her Son Viaan Talks To 'Masi' Over Video Call)

On September 10, 2020, Sonam Kapoor Ahuja's FIL, Harish Ahuja turned a year older and the doting daughter-in-law, Sonam wished him in the sweetest manner. Her birthday wish for her FIL speaks volumes about their great comardarie. Scroll down to know more! Sharing some unseen pictures with her sasur ji from her pre-wedding function and reception, Sonam wrote, "Happy Birthday" atop them. The first picture is from her mehendi ceremony and sees Sonam and her father-in-law in the frame. Sonam's father-in-law, Harish Ahuja can be seen giving blessings to her; the monochrome picture encompasses so many emotions that words fail to describe the beauty of it! The second picture is from Sonam Kapoor Ahuja's wedding reception, wherein she can be seen feeding cake to her father-in-law. The third picture has Sonam and her husband, Anand posing for the camera along with her father-in-law, Harish Ahuja. Check out the pictures below: 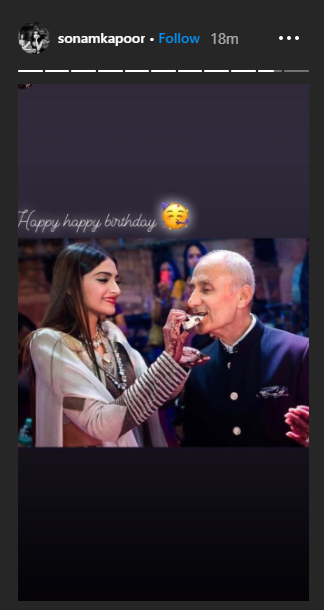 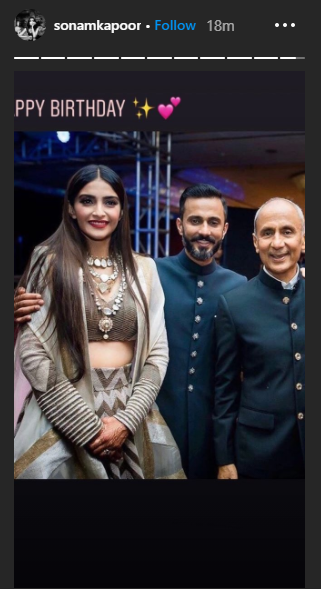 The doting couple, Sonam Kapoor Ahuja and Anand Ahuja share a warm bond with each other's families. On the occasion of Father's Day on 2020, Anand Ahuja had shared a beautiful candid picture of his father, Harish Ahuja and FIL, Anil Kapoor. The picture had both of them dancing their hearts out in ethnic attires. Anand had captioned the post with two heart emojis. (Also Read: Neena Gupta Recalls Raising Daughter, Masaba Gupta As A Single Parent, Says 'I Worked Like A Dog') 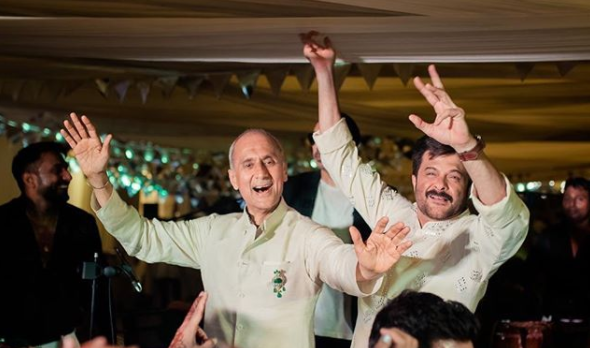 On the same day, Sonam Kapoor Ahuja had also posted pictures with her father, Anil Kapoor and FIL, Harish Ahuja. Along with the pictures, she had penned a beautiful note for them. It could be read as “A father’s tears and fears are unseen, his love is unexpressed, but his care and protection remain as a pillar of strength throughout our lives.” – Ama H. Vanniarachchy I’m blessed to be born to a father who has taught me the value of integrity, morals, progressive ideas and the importance of work ethic, I’m lucky enough to marry into a family where my father in law leads by example with his optimism, spirituality and doing everything he does with an unbeatable conscience. Both of them have given me unconditional love and support. And they’ve both started with nothing and reached stars and have done everything to give their children whatever they need so they don’t have to face the same trials they faced. But our most important inheritance is the values that they have passed down. Happy Father’s Day to the super heroes in my life.. I am because of you." Sonam Kapoor Ahuja is the favourite of her in-laws. She had spent the lockdown in Delhi, along with her husband, Anand Ahuja and her in-laws. In an interview with the Filmfare, Sonam had opened up about how she had spent her lockdown days with her mother-in-law, Priya Ahuja. She had said, “So my mom-in-law is one of the most progressive and cool women you will ever come across. She dresses beautifully. Both of us were like during quarantine, we are not going to dress up in pajamas and work out clothes. We love baking together.” She had also revealed that since both of them love dressing up, she had made sure not to stay in her gym clothes and pyjamas for more than 2 to 3 days. (Don't Miss: Nisha Rawal Twins And Stuns In Black With Karan Mehra For Her Hubby Cheeks' Birthday Eve Celebration)