The power couple of the Bollywood industry, who had a perfect long-distance relationship, which was later on upgraded into a long-distance marriage. Also, the adorable duo, who has been giving major couple goals to the millenials for some years now. From Diwali, Christmas to New Year, they never skip an opportunity to travel miles to be with each other, and that is what makes them one of the most followed and admired couples of the B-town. Yes! We are talking about Bollywood actress, Sonam Kapoor Ahuja and her husband, Anand Ahuja, who have redefined the meaning of true love and perfect married life. (Recommended Read: Khushi Kapoor Learns Kathak From Her Cousin, Shanaya Kapoor, Looks Utterly Happy [Picture Inside])

Sonam Kapoor Ahuja and Anand Ahuja had taken their love to the next level and had tied the knot on May 8, 2018. They had exchanged their wedding vows in a beautiful and traditional ceremony. The lovebirds had gotten married in a Sikh-style wedding as per the norms and rituals followed in an Anand Karaj, and the rest is a beautiful history. On January 26, 2021, Sonam Kapoor Ahuja took to her Instagram stories and shared a Boomerang of the diamond-encrusted pop-like motifs of the famous Tokyo based jewellery label, EYEFUNNY which she stole from her husband, Anand Ahuja's collection. The actress is in love with the trendy and stylish jewellery that has a perfect blend of street-wear culture in it's design. In the Boomerang, we can see two motifs being placed inside a box and it's quite easy to fall in love with them, as the little diamonds encrusted on the motifs are breathtakingly beautiful. The actress wrote, "Stole these from @AnandAhuja" atop it. The doting husband reshared her story on his IG stories immediately and penned "@EYEFUNNY_Official I couldn't pull these off as well as @SonamKapoor So I'm going to need some new please!" atop it. (Don't Miss: Ankita Bhargava Gets A Love-Filled Kiss From Daughter, Mehr In This Candid Photo With Their Pooch) 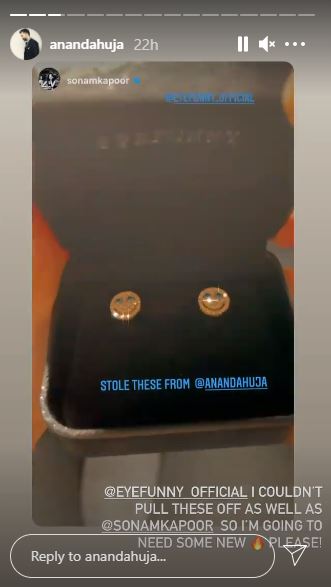 Well, this isn't the first time, when we have seen Sonam Kapoor Ahuja stealing and lending her husband, Anand Ahuja's accessories, clothes, footwear, and anything that belongs to him. For instance, on December 16, 2020, Anand Ahuja had taken to his IG handle and had shared two adorable pictures of his wife, Sonam with some lovely flowers and had revealed that he's obsessed with her. The doting hubby had penned a caption, and it could be read as "Obsessed with you @sonamkapoor cc @bhaane." Soon, the stunning actress had dropped a lovely comment in the comment section of her hubby's post, in which she had revealed that the Shinjuku jacket she had worn in the pictures is of her hubby. Her sweet comment could be read as "Thanks for lending me your jacket @anandahuja love you the most in the world!" Take a look: 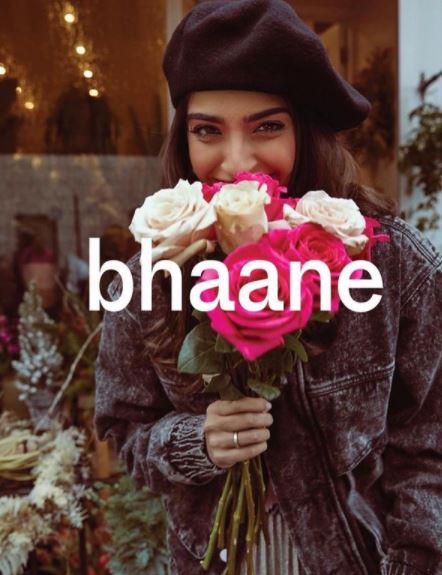 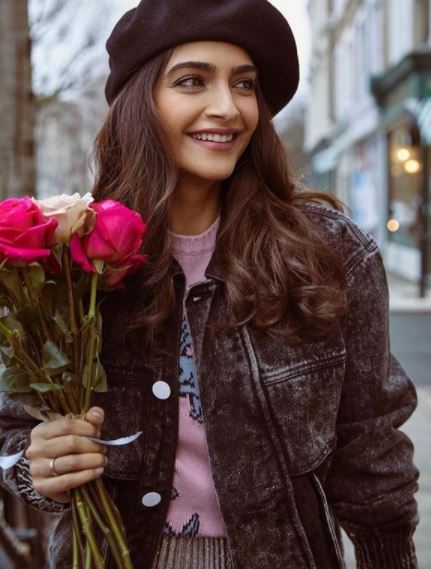 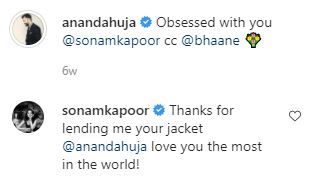 In an interview with Firstpost, Sonam had recalled the time, when she had met Anand Ahuja for the first time in her life. She had said, "When I met Anand for the first time, I was wearing sneakers. According to Anand, I was wearing very odd and old-fashioned shoes... Looking at my sneakers, he immediately quizzed 'Arre yaar! Yeh kya sneakers phene huye hai tumne? (What kind of sneakers are you wearing?'. Then he requested me to stop wearing these sneakers, and he immediately ordered some good brand shoes for me, which were indeed very expensive as well." (Also Read: Varun Dhawan Pens A Note For His Fans Thanking Them, Shares An Unseen Picture From The Wedding) Did you like Sonam and Anand's sweet camaraderie? Let us know!