Sonam Kapoor Ahuja and Anand S Ahuja make for one of the loveliest couples in the Tinseltown. Checkout Sonam's sweet gesture for Anand as she missed him! 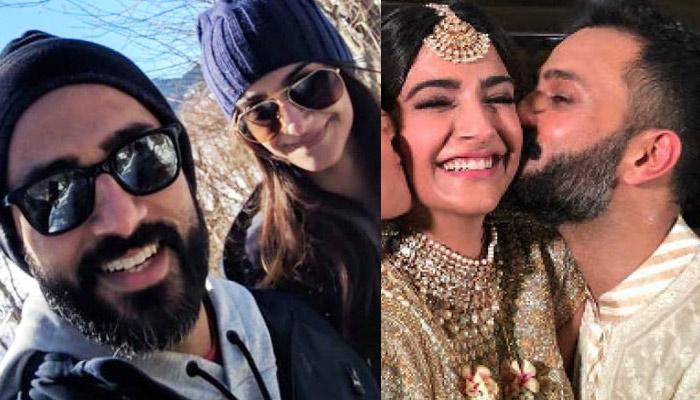 Nothing could be more of a blessing than to have your best friend as your partner for life. And if you think only two similar people can be knotted together into the bond of longtime togetherness, then you are probably wrong. We have a classic example of Bollywood actress, Sonam Kapoor Ahuja and her husband, Anand S Ahuja, who are two completely different personalities reaffirming everyone’s trust in the institution of marriage.

May 8, 2018, was the big day in Sonam and Anand’s lives as they took the nuptial plunge in the due attendance of their families. Theirs was a proper Sikh marriage, which had all the rites and rituals of an Anand Karaj ceremony. And ever since, the two have been inseparable despite being in different time zones altogether. If you ever want to know how marriage is a joyride, Sonam and Anand will give you cues! (Also Read: Ananya Panday Lessons Brides On How To Style A Lehenga Without A Dupatta At Lakme Fashion Week 2019)

Sonam is currently busy with the promotions of her much-awaited upcoming movie, The Zoya Factor, which is slated for a September 20, 2019, release. Amidst all the preps, Sonam took to her official Instagram handle and shared a lovely Instagram story dedicated to her beau, Anand, as she confessed missing him. Sonam, sounding a little shattered, shared a series of pictures with Anand from their outings and wrote, "I miss you so much, nothing is worth being away from you” atop one of them. Checkout all the snaps here:

This is not the first time when Sonam has expressed how much she misses Anand. On October 3, 2018, which was National Boyfriend Day, Sonam had taken to Instagram to share a throwback picture with Anand, revealing why her boyfriend got promoted to her husband. She had penned, "Happy #nationalboyfriendday to @anandahuja who used to be the best boyfriend and that’s why got promoted to fiancé and then husband. Love you forever and ever. #throwbackthursday #everydayphenomenal”. To which, Anand had replied, “You'll always be my girlfriend first and foremost! See you tomorrow!” And that’s when Sonam had mentioned, “@anandahuja miss you”. (Checkout: Sameera Reddy's Husband, Akshai Varde Is The Daddy Cool Of Tinseltown, Plays Guitar For His Girl)

In an interview with the Filmfare, Anand had revealed how they manage to successfully run their long-distance marriage, “When it comes to marriage, small things matter a lot. We eat meals together, even if we are in different time zones, on Skype. We also actively make sure that we don’t go over two weeks without seeing each other.”

When Sonam was asked by an interviewer as to when exactly she got the instinct about Anand being 'the one' for her, she had quipped, “I was apparently wearing the worst sneakers he had ever seen. I keep telling him that he fell in love with me despite my bad sneaker game. That day, walking and talking in London, I knew he was the love of my life. He apparently knew the first time we spoke on the phone. It was just so easy.” (Do Read: Shahid Kapoor And Mira Rajput Shell Out Couple Goals As They Enter Lakme Fashion Week Holding Hands)

May God continue to bless Sonam and Anand’s relationship! Mabuhay!