Sonali Bendre has always applauded the support of her friends and family in helping her get better. In a recent interview, Sonali revealed the reaction of her son, Ranveer, when she was getting bald.

Life is like a pack of cards, standing in pillion upon one another. One blow of wind and the cards will scatter in no time. When everything goes just as right in life, we pray to God so that life remains that way. But what’s a life without challenges? Harder the circumstances, the tougher one will be and one of our favourite Bollywood celebs, Sonali Bendre, is taking on each day in her life as it comes, ‘one day at a time’. And trust me you, the way she is happily dealing with the ‘big C’, there will very soon be a time when we will share the news of Sonali being completely cured of the nasty disease. (Do Read: Ranbir Kapoor's Sister, Riddhima Shares A Childhood Picture With Him And Daddy, Rishi Kapoor)

It was a Wednesday, July 04, 2018 when the whole world went in for a momentary shock. While we were used to seeing pictures of Sonali Bendre from the sets and in beautiful attires, the actress took to Instagram and shared a picture of herself, seated with her hubby, Goldie Behl, along with a long caption that informed the world that we will not get to see much of the actress for sometime. But shattering all our beliefs, Sonali became even more active on Instagram and regularly kept sharing pictures and updates from New York. 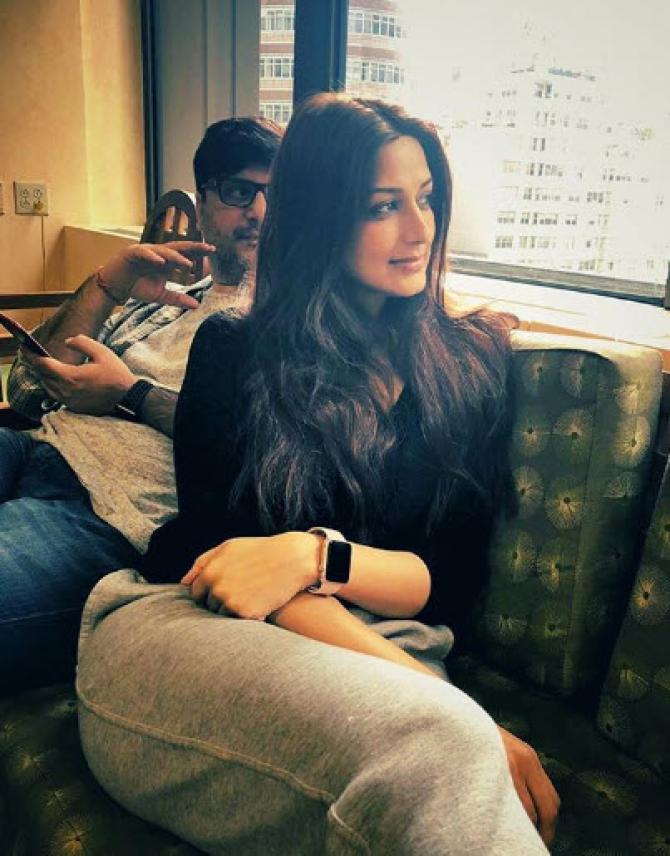 Sonali Bendre has time and again applauded the support of her friends and family in helping her get better. In a recent interview, Sonali revealed the reaction she got from her son, Ranveer Behl when she told her about getting bald. She stated in an interview, “When I went back to him for the big day for the haircut, I was waiting for Ranveer to come and join me in New York. I didn't want him to see me with my hair cut suddenly, I wanted him to be a part of that because I didn't want it to be a big shock for him. When we went back for the haircut, I said just let me shave it off and go bald and he said no, there's time for it still. You can enjoy a shorter haircut. It'll be easier to deal with when it's falling and that's how we went through 2 more haircuts - slightly shorter, even more, shorter and then I went bald.” (Must Read: Arjun Kapoor Reveals If He Is Waiting For Sis, Anshula To Get Married Before Marrying Malaika Arora) 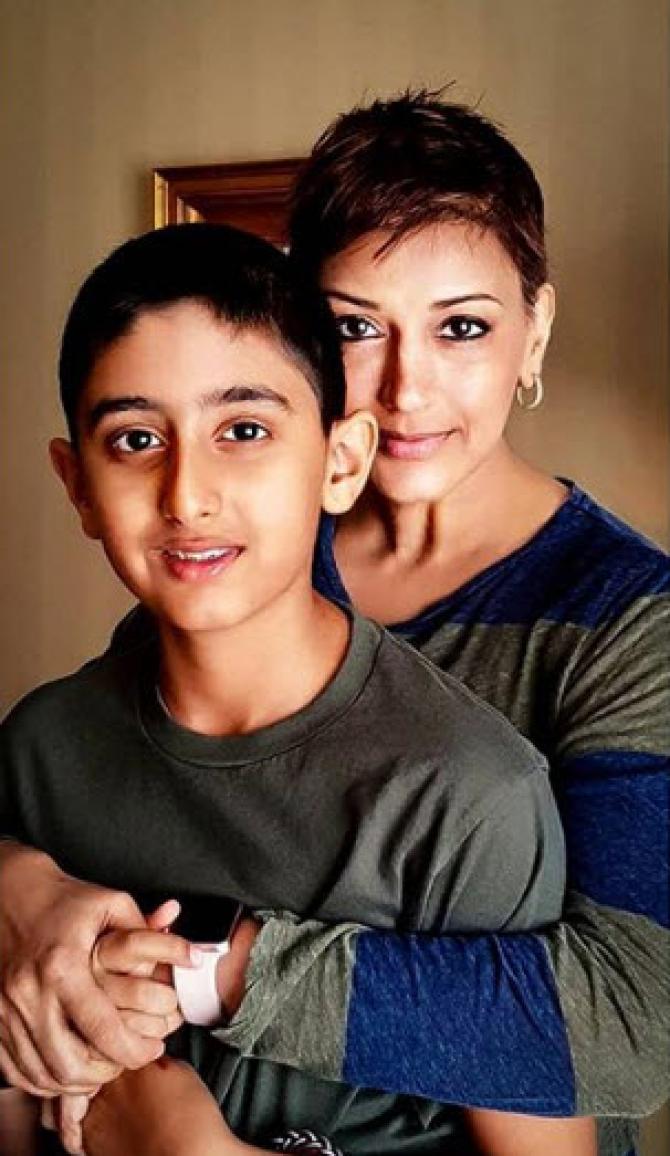 Further speaking about her cutting her long, straight locks, Sonali Bendre had stated, “I think at that point of time when I was cutting my hair, there was no option and I definitely didn't want my hair falling off on my pillows. I wanted to take control of the situation and cut it off.” She had further added, “I remember going into a salon to get the last blow-dry and when I was getting that last blow-dry, I was waiting and getting my hair washed, was supposed to give me my blow dry and he understood why because my friend was shooting the whole process and my sister was with me and we were talking about it throughout from which he realized what it was like. And I said you know what, maybe I should just come and shave it off; to which he said you come, I'll give you a great haircut. And I saw him giving somebody else a haircut and I loved the way he gave it and I said that's not a bad idea." 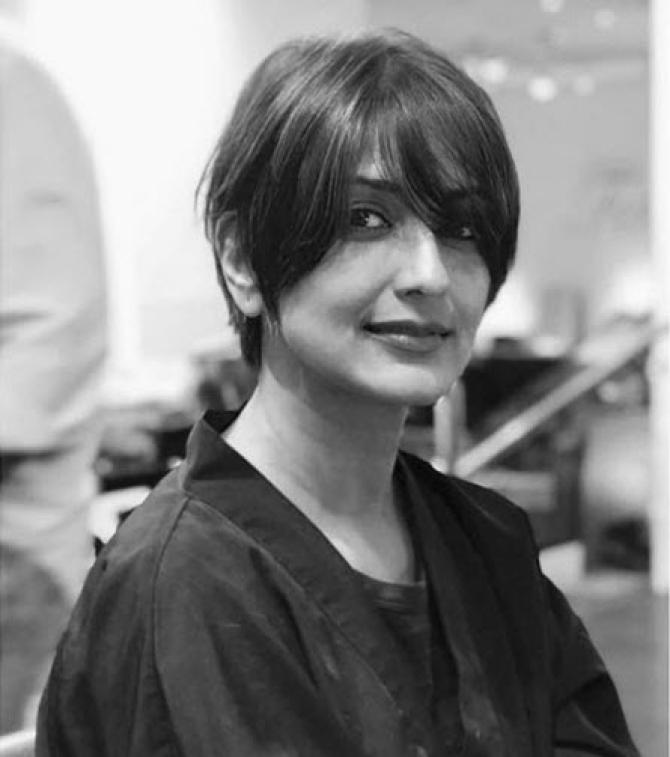 Two days back on May 27, 2019, Sonali Bendre had taken to Instagram and posted a picture, flaunting her super-cool summer haircut. Sharing a picture, she wrote, "@tomoarakawa is in town all the way from #NYC and that was excuse enough for a new look... so @kantamotwani was called and voila... my new summer look! A well-spent Sunday afternoon with my two favourites pampering me with my first proper cut and color in over a year!! Lil things like this make me so happy. #MyNewNormal #SwitchOnTheSunshine." 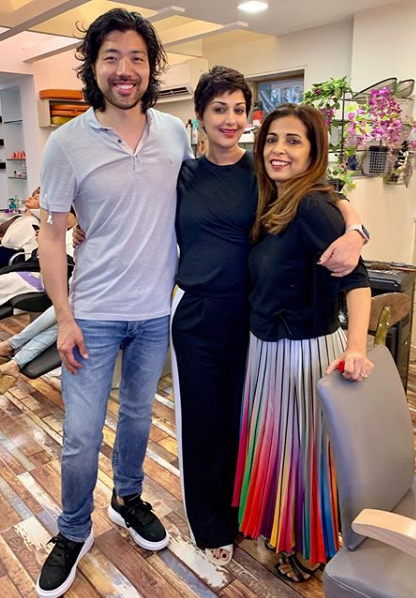 Sonali Bendre also shared her reaction when she had cut her hair for the first time, "The first time when I cut my hair, I don't know if it was heartbreaking, not really, but by then I had switched off. I think being alive was more important than hair and suddenly the perspective on life had changed. So I remember my friend telling me that let's collect the hair and make a wig out of it and I said no, let it go, it's meant to go. I don't want to hold on to it, it's meant for somebody else. And I just let it go. I'm not saying I was joyful about this, but I wasn't very sad about it, I accepted what it was and like I said, it had changed my perspective on life." Sonali Bendre also shared, "You know I've been kind of boring in my life and with my hair because it was straight and long, and when you have such long hair, you're always scared to cut it. It takes really long to grow back so you kind of hold on to it. I think now for me, I look at this period of my life as a time of experimenting with my hair. It's back from being completely gone and the texture is different. So I'm going to make the most of it and try as many different looks as I can. I don't think I've ever had as much fun with my hair as I will now." (Also Read: Kajol Breaks Down Into Tears, Hugging Aishwarya Rai At Her Late Father-In-Law, Veeru Devgn's Funeral) 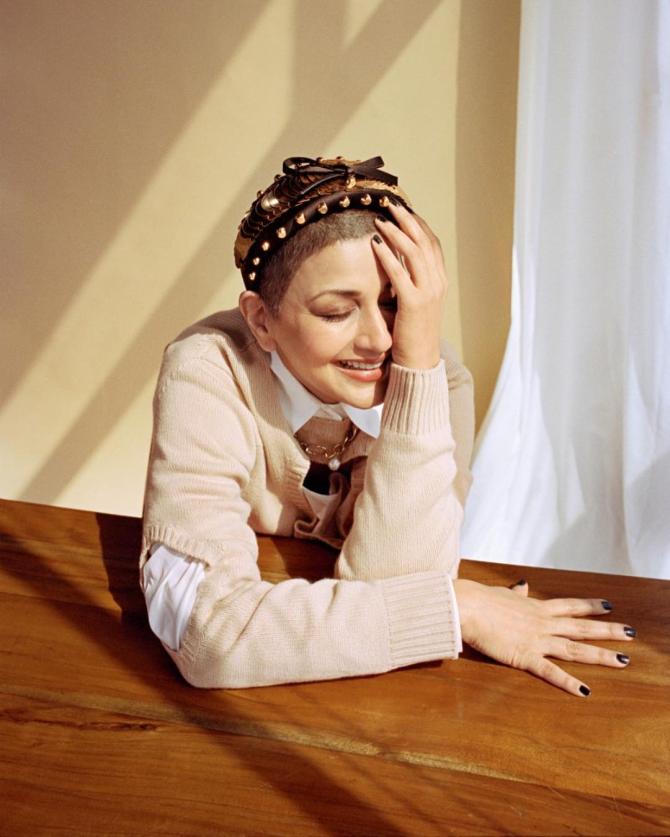 Such a power woman, Sonali Bendre is, isn’t she? Pour in your comments!