AÂ recent revelation about Sonakshi Sinha's love life has made us put our thinking caps on. Sonakshi revealed she has dated a celebrity but didn't disclose the identity. We wonder who he is?

It wasn’t an Ittefaq that Dabangg Sonakshi Sinha made everyone go OMG – Oh My God over her Dagabaaz Naina. With her prominent roles, Sonakshi’s journey in the film industry has been a Total Dhamaal and has created a niche for herself proving she is not a Kalank. Shatrughan Sinha and Poonam Sinha’s youngest daughter, Sonakshi has come a long way in her 9-year-long journey in Bollywood. Apart from her professional life, Sonakshi’s personal life too has often created the headlines. (Also Read: Ridhi Dogra's Cryptic Post About 'Changes In Life' Reveals Her Current Life State Post Separation)

Sonakshi Sinha has been linked up with Sohail Khan’s brother-in-law, Bunty Sachdev, R... Rajkumar co-star, Shahid Kapoor, Tevar co-star, Arjun Kapoor and Notebook fame, Zaheer Iqbal. Speaking about Sonakshi and Bunty, paparazzi had often captured them together and in 2017, amidst their marriage rumours came a report about their breakup. When she was asked about the same in an interview, the Noor star added, "When it's fixed, I myself will announce it to the world. I don't believe things like these should be hidden. I'm too involved with my work to even consider marriage. I haven't even thought about it yet. So, I don't know why people make such assumptions."

Elaborating more about Sonakshi Sinha’s relationships later, first things first. A recent revelation about her love life has made us put our thinking caps on. According to the IANS, Sonakshi was asked about her views on dating someone from the film industry, on a chat show. To which, Sonakshi replied, "My parents want me to date a susheel ladka and no one from the Bollywood film industry is like that." She further revealed that she did date someone from the industry in the past, however she didn't reveal the identity. Talking about her love life, Sonakshi said, "I have dated a celebrity and the world doesn't know." 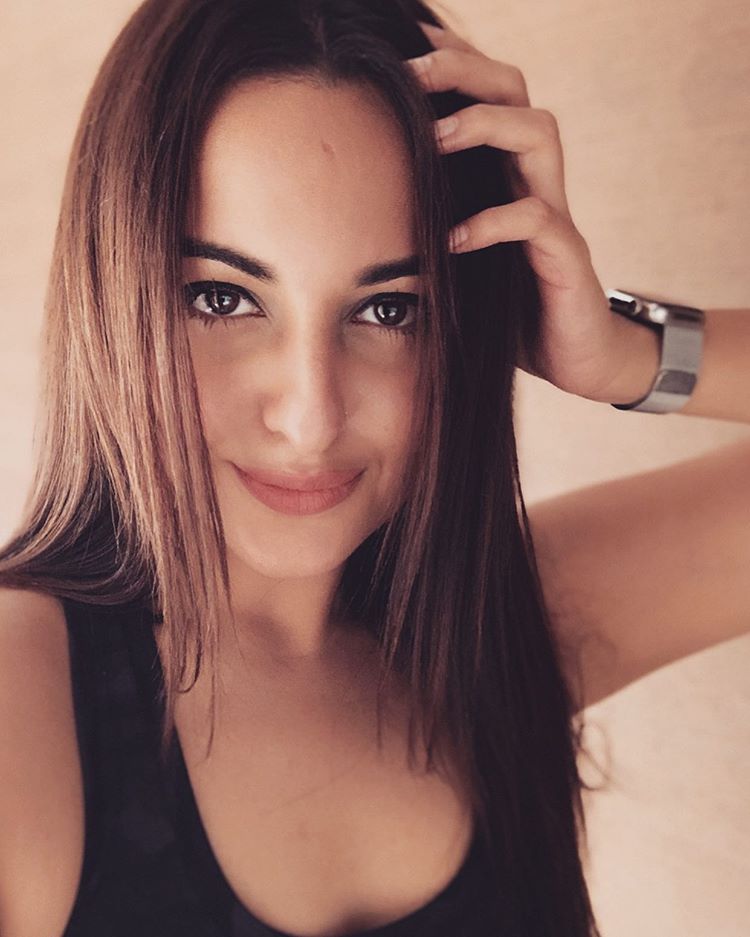 Though Sonakshi Sinha has always maintained a low profile in terms of her personal and love life, she revealed on the same chat show that she cannot deal with infidelity in a relationship. When asked if she ever gets to know that her boyfriend is cheating on her, Sonakshi retorted, "He won't live to see the next day." During the promotions of Kalank, Sonakshi Sinha was asked to comment on her dating speculations with her first co-star, Salman Khan’s close friend’s son, Zaheer Iqbal. She dodged the question and had said, "When it is not? There’s nothing to deal with because honestly, I think if there was something in that matter to talk about, I will be the first person to come and talk about. I’m toh waiting (Laughs). I’m waiting for love, some prince charming would come, I’m waiting. Nobody is there right now. So, when it happens, I feel that I will be very happy about it." (Also Read: Shah Rukh Khan's Son Aryan Khan Is Dating Blogger From London, Gauri Khan Has Already Approved Her?) Tevar couple, Arjun Kapoor and Sonakshi Sinha, had apparently begun to date during their film, although they reportedly called it quits shortly after the completion of the film. In an interview with the Mumbai Mirror, Arjun was asked what went wrong with Sonakshi. To which, he had said, "Some equations last. Others don't go beyond the making of a film because after it is over, people go their separate ways. I am still really fond of her as an individual. Unfortunately, it is always made to seem like we do not acknowledge each other at parties, which is not the case. We always make it a point to greet each other. There is no pressure on either of us to maintain an equation beyond a certain amount of time." If a report in DNA is to be believed, it was a fundamental difference in Arjun Kapoor and Sonakshi Sinha’s personalities that drove a wedge between them. A source had stated, "Sonakshi is a very emotional girl. She doesn't hide her feelings for those she cares about. Arjun, on the other hand, is more low-key. He obviously couldn't handle her strong emotions." Another source was quoted as saying, "Sonakshi, like most girls, wanted to be around him all the time. He was feeling a little stifled by the constant togetherness and the calls. It was just happening all too fast for him. You can't blame either for this split." In 2019, on the 13th episode of Koffee With Karan season 6, Shahid Kapoor made an appearance with his younger half-sibling, Ishaan Khatter. Then the host of the show, Karan Johar had revealed that earlier whenever Shahid had come on the show, he came with someone he has been linked to. In the first season, Shahid came with Esha Deol, in the second season he came with Kareena Kapoor, in the third season he came with Priyanka Chopra, in the fourth season he came with Sonakshi Sinha and finally on the fifth season he was accompanied by his wife, Mira Rajput Kapoor. 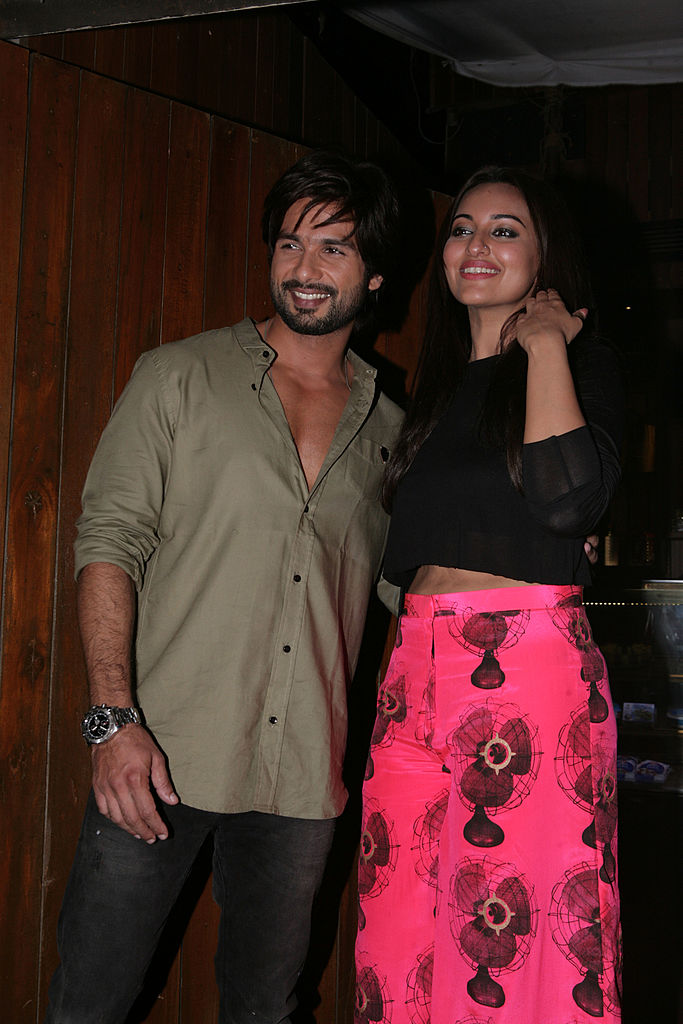 So, when Karan Johar had asked Shahid Kapoor, “Esha Deol you weren’t dating na?”, he had replied, “Not at all. Actually, we met for the first time on your show.” When Karan had further said, “So, you dated Priyanka, Kareena and then there were rumours about Sonakshi.” Shahid didn’t deny his relationship with them and revealed that he recently bumped into his ex, Kareena on many occasions. (Also Read: Sushmita Sen's Proud BF, Rohman Shawl Congratulates Her For Featuring On 'World's Most Admired 2019') 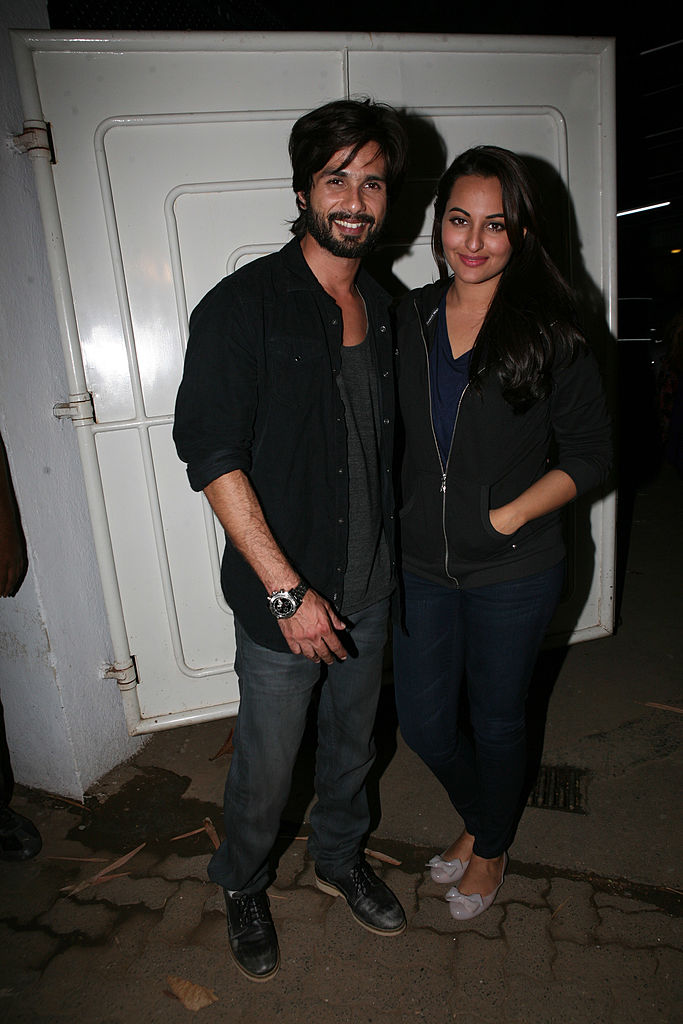 What do you think, Sonakshi Sinha’s confession of dating someone from the industry was for Shahid Kapoor, Arjun Kapoor or Zaheer Iqbal? Keep us posted!