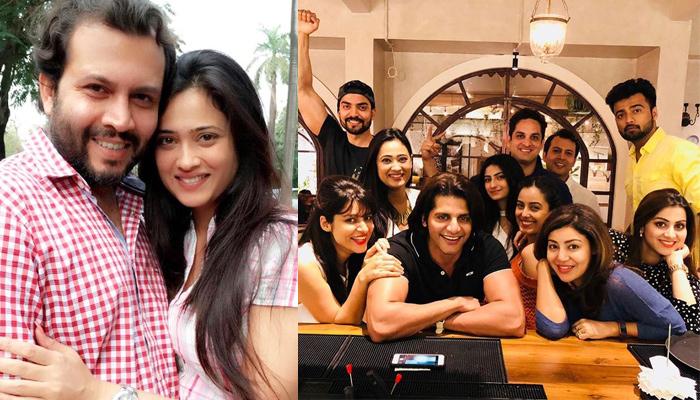 Television popular actress Shweta Tiwari and TV actor-producer and her husband, Abhinav Kohli make a lovely couple and have been married for four years. Last year, it was reported that the duo is going through a bumpy phase in their marriage. Amidst all these rumours, the couple took to their official Instagram handle and put a full stop to these rumour doubting their marriage.

Yes, it's a reason for happiness for all the Shweta-Abhinav Jodi fans. Recently, the beautiful Kasautii Zindagii Kay fame actress took to her Instagram handle and posted the above picture partying with husband, daughter Palak(from her first marriage) and other close industry friends like Karanvir Bohra, Gurmeet Chaudhary, Debina Bonnerjee, Srishty Rode to name a few. And sweetly captioned it as “In the End all you remember is Fun..!!! #1bhkbrewhousekitchen.” Even her husband, Abhinav took to his official Instagram handle and posted an adorable picture with his wife from the same party. Here is the picture:

And adorably, he captioned the picture as, “Long Due... Ever in Love.You are the prettiest girl I have ever seen @shweta.tiwari.” This clearly states that the cutesy couple is still together, happy in each other's company and no one can set them apart. For the uninitiated ones, in 2017 it was reported that the couple is having a lot of opinion clashes between Abhinav's career and Shweta's success. In one of the interviews to a leading daily, Abhinav put an end to the rumours of their troubled marriage and was quoted as saying, “All is well between Shweta and me. I have never been insecure about her success. We are both focussing on our work and are in a happy space." To another leading daily, he commented saying, “I really don’t want to comment on this matter. We do not want to create much ado about anything. I just want to say all is fine.”

For those of you who do not know, Shweta and Abhinav have been married since July 2013. They met on the sets of their show Jaane Kya Baat Huyi in the year 2009 and after enjoying a few years of courtship, tied the nuptial knot in 2013. Earlier, Shweta Tiwari had married Raja Chaudhary but their marriage didn’t work so they called it quits! On the work front, Abhinav is going to have a comeback on the silver screen with his show Ishq Mein Marjawan while wife Shweta is enjoying her motherhood with her little one, Reyansh and not miss a chance to be with him. She is such a doting mother and we cannot stop praising her enough.

Shweta-Abhinav fans, now you have a reason to rejoice seeing them together. Comment below what you have to say about this adorable couple.

Next Read:Hina Khan's Favourite Pooh Which She Sacrificed In Bigg Boss 11 Is Back In Her Life, Thanks To Rocky