This year began with a lot of hitches. From Sonam Kapoor Ahuja and Anand S Ahuja tying the knot, to famous designer, Shriya Bhupal, who got married to her ‘now hubby’ Anindith Reddy on July 6, 2017, in Hyderabad. (Recommended Read: Shriya Bhupal Marries Anindith Reddy, Wore 2 Different 'All-Diamond' Looks For Jaimala And Pheras)

Needless to say that being a designer, the multimillion heiress, would sport a one-of-a-kind attire at her wedding and she definitely did that and how! The newbie bride wore two different attires for two different rituals and looked no less than an angel! Here’s a picture: 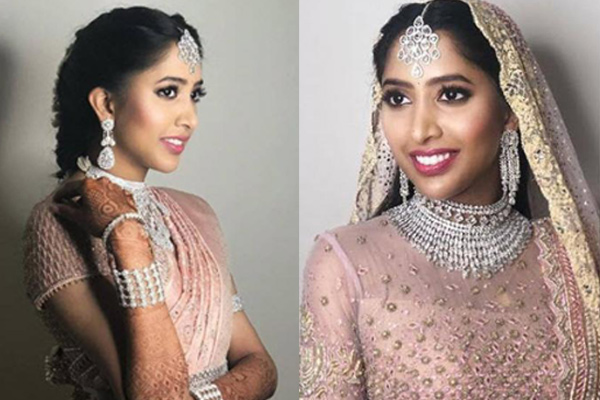 When we talk of celebrity weddings, what one is mostly interested in is, their grand entry towards the mandap, where the groom eagerly waits for his lady to be forever his. In this video, catch a glimpse of the beautiful designer, all set to embark a new journey of her life. While we will get into all the descriptions of the dress later, what caught our fancy was the veil that covered her face. It seems that the veil was specifically designed for this purpose. Her veil had a golden bordered, broad cut-work with dropping pearls! Gorgeousness to another level, we say! Here’s the video of her entry:

Both Shriya and her hubby, Anindith looked like a million bucks on their wedding. Shriya looked beautiful to another level in her Tarun Tahiliani heavy embellished saree with all diamond jewellery during her pheras. She was adorned with diamond from top to bottom, be it her earrings, neckpiece or the bracelet. Anindith, on the other hand, donned a simple a cream-coloured sherwani which he teamed up with a heavy royal stole. 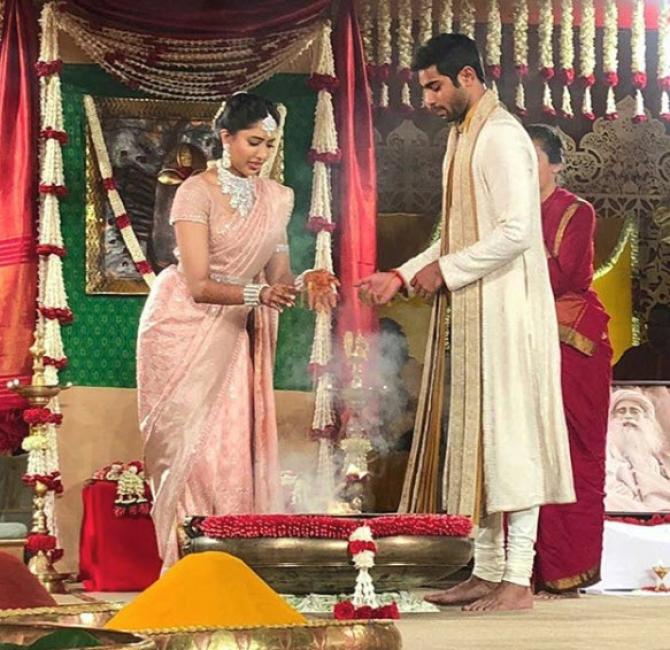 The bride later on, quickly changed into a different attire during her entry and jaimala. Shriya adorned a pastel pink coloured lehenga with 3/4th sleeves and a veil. This time, the newbie bride was again in diamond jewellery, but a different one! Her jaimala jewellery was diamond bangles unlike bracelets in the aforementioned look. 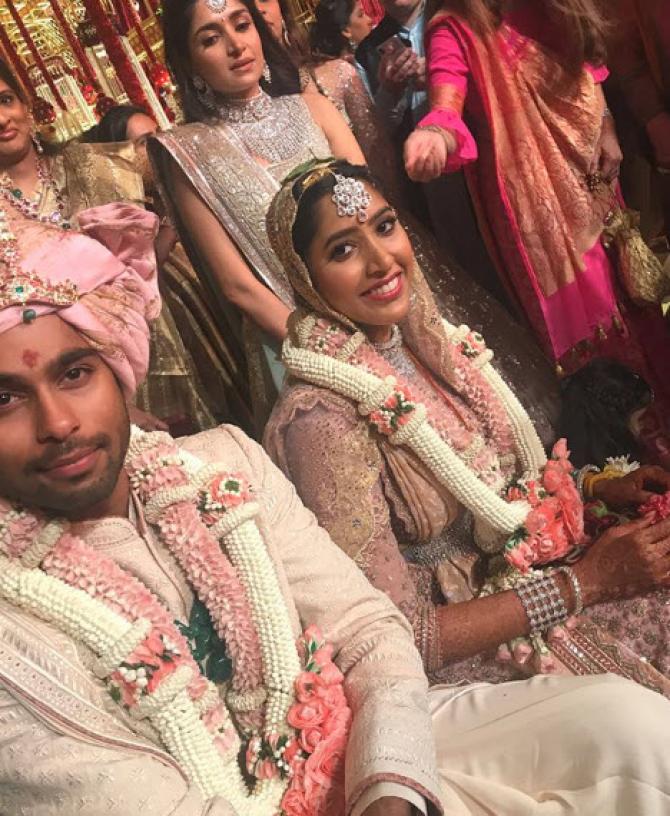 Shriya and Anindith’s sangeet look, was some serious goal. They couple surely taught us how to keep things simple yet elegant. As revealed by Shriya in an interview herself, the beautiful bride wore a long white gown and ravishingly complemented it with a diamond and emerald maang teeka. Anindith, too, looked dapper in a formal black suit and white shirt. Here’s a picture: 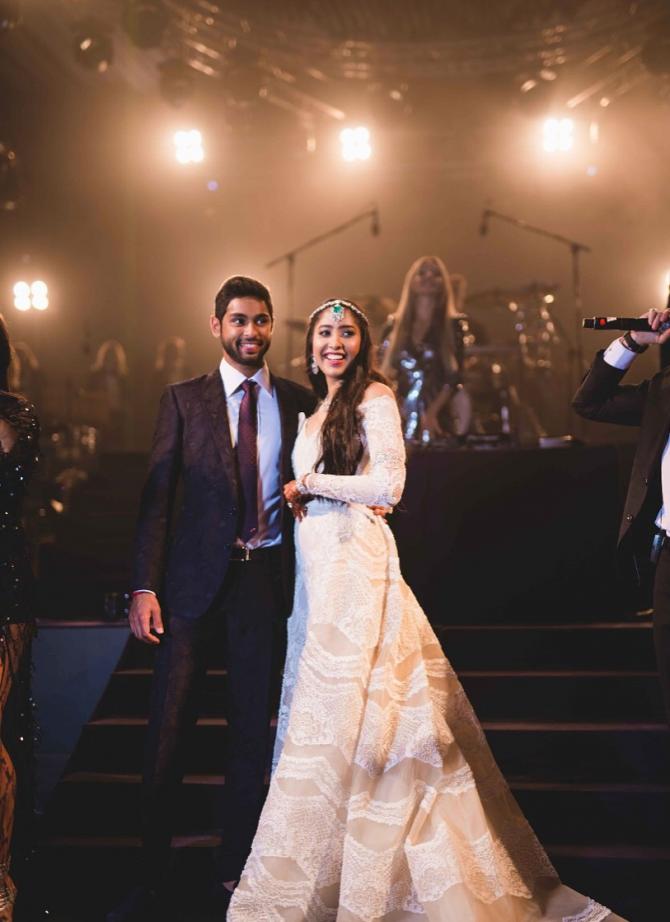 The couple also had a dreamy pre-wedding masquerade ball, which was hosted at the Chantilly Palace outside Paris. The couple chose to look straight out of a dream, where the-then, bride-to-be had opted for an elegant and graceful flaming red Giambattista Valli tiered gown and gold crown. And her fiancé, Anindith look like an absolute gentleman in a black tuxedo suit, which was complemented with a bow-tie. About the pre-wedding bash, a source close to the families had shared with the TOI, “The families of both the groom and bride wanted this to be an intimate affair, so they kept all the celebrations up to now very low key. Shriya and Anindith were engaged back in April. It was a very small lagna patrika and engagement ceremony at home, where the priests and the grandparents blessed the young couple.”

And further added, “The pre-wedding bash in Paris was something we’ve been looking forward to because a big celebration was long overdue.” Talking about the masquerade ball, a guest who attended the bash was quoted as saying, “It was a spectacular event! There was music and dance, fireworks and stunning performances, and the evening was dream-like. Shriya looked every bit a princess and together, she and Anindith make such a gorgeous couple.” (Also Read: Multi-Millionaire, Famous Designer Shriya Bhupal's Wedding Invite Is Elegant; Dress Details Inside) For the uninitiated, Shriya is the granddaughter of Hyderabad-based business tycoon, Dr. GVK Reddy. Her now-hubby, Anindith is the elder son of Vishweshwar Reddy, who is an MP and one of the richest politicians in Telangana and the grandson of Apollo hospitals Chairman and founder, Prathap C. Reddy.

Shriya and Anindith, we wish you tonnes of happiness for entering into a new phase of life!