Shreya Ghoshal congratulated her friend, Parag Agarwal on becoming the CEO of Twitter. Her fans started digging out the connection between the two.

Singer, Shreya Ghoshal, needs no introduction as she's already ruling the hearts of millions of people with her melodious voice for decades. Shreya is an avid social media user and never misses an opportunity to interact with fans and friends on the internet. However, some of her old chats and posts are saved in the internet's collective memory, and her fans were smart enough to dig them out. They even found some old Twitter exchanges between Shreya Ghoshal and the current CEO of Twitter, Parag Agarwal, and started calling them 'Bachpan ka pyar'.

For the unversed, Shreya Ghoshal did her schooling up to eighth grade at the Atomic Energy Central School, in Rawatbhata, where she was a classmate of the current CEO of Twitter, Parag Agrawal. Agrawal is also close to Shreya Ghoshal’s husband, Shiladitya Mukhopadhyaya, who is also a technology executive. When Parag Agarwal took over as Twitter CEO after Jack Dorsey, all the influential people praised Parag for his big achievement. Popular singer, Shreya Ghoshal also congratulated him and tweeted:

Shreya Ghoshal Finally Shares The First Glimpse Of Her Newborn Son, Reveals The Name Of Her Baby Boy

Shreya Ghoshal Embraces Motherhood For The First Time, Announces The Birth Of Her Child

"Congrats @paraga So proud of you!! Big day for us, celebrating this news."

Recommended read: Athiya Shetty And Her Cricketer-Boyfriend, KL Rahul Made Their First Public Appearance As A Couple 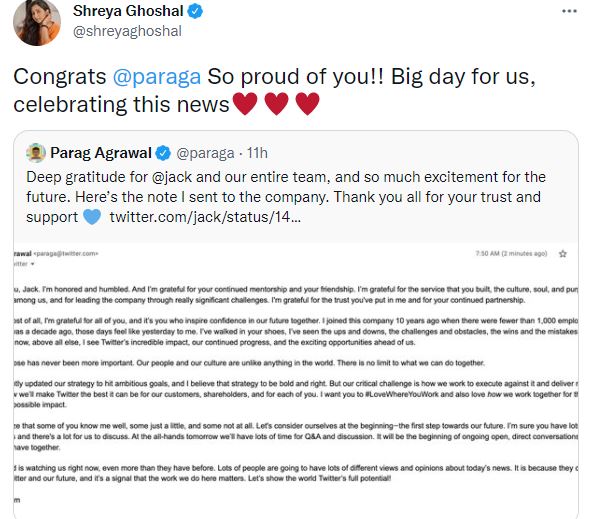 As soon as the 37-year-old singer tweeted, her fans got curious about her connection with the technology executive. A few moments after the singer’s tweet, her fans flooded the comment section of the post with the screenshots of Shreya and Parag's old photos and conversations from 2010. While in one of the old tweets, Shreya had wished Agrawal on his birthday, in another post, a tweet from Agrawal, which read: 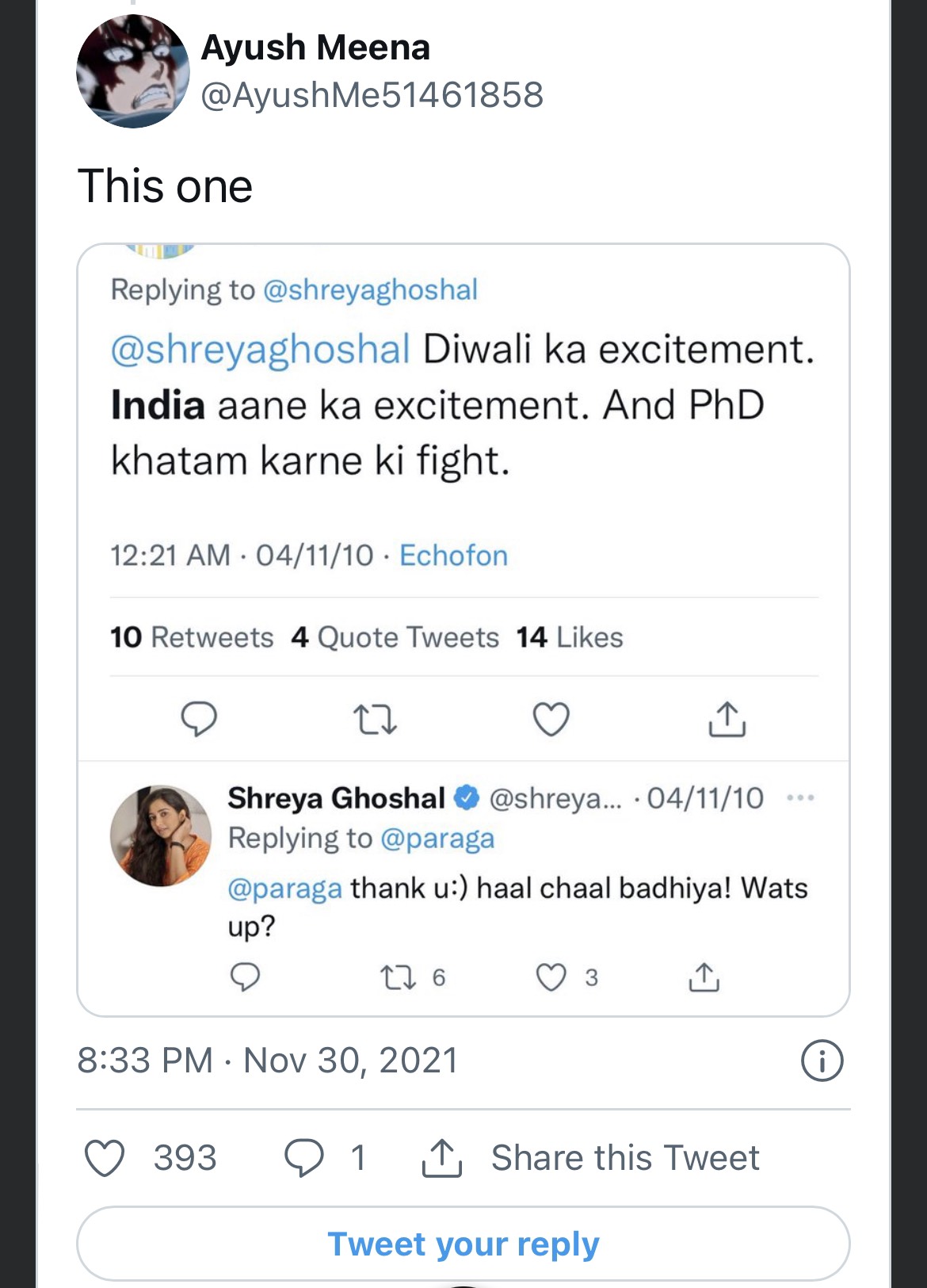 Within a few minutes, Shreya Ghoshal found herself trending on Twitter, and then stumbled upon the old tweet exchanges going viral on the internet. Reacting to her old Twitter exchanges with Parag, Shreya clarified that they were just 'kids' back then, and the microblogging site had just launched in 2010. She tweeted:

Also read: Neha Kakkar Kisses Rohanpreet Singh On His Birthday, Makes Her Husband Cut His Cake In A Bathrobe 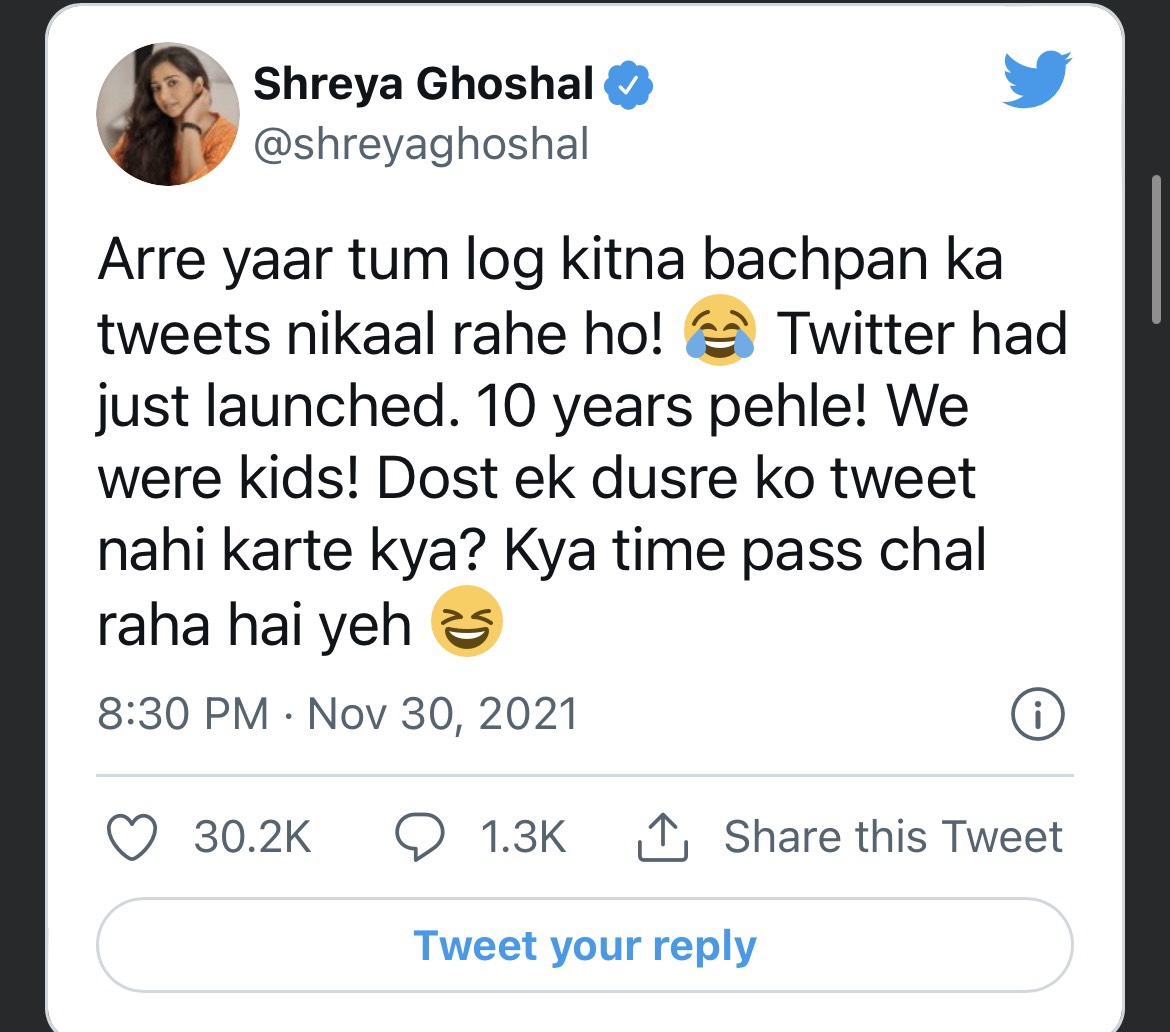 Shreya Ghoshal and Parag Agrawal's friendship goes back in time. In 2010, the singer had asked fans to wish her 'bachpan ka dost' on social media. To which, Agrawal had replied, "Aila. You are influential. Followers and Twitter messages flooding in." Shreya Ghoshal's tweet could be read as:

"Hey all! Found another bachpan ka dost! Foodie and traveller... A Stanford scholar! Follow @paraga. It was his b'day yesterday! Wish him pls." 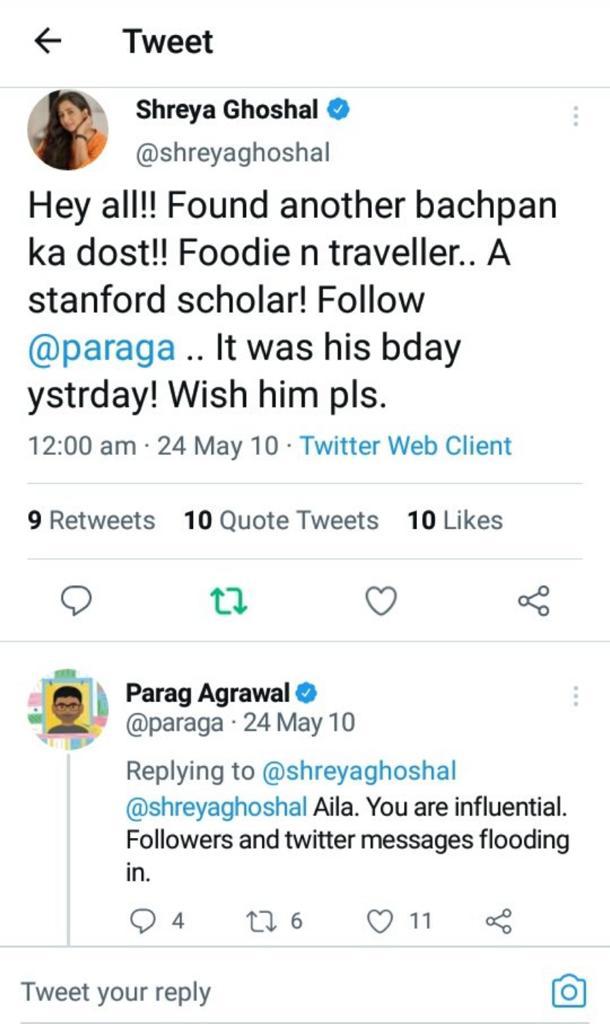 For the unversed, Shreya Ghoshal had married Shiladitya Mukhopadhyaya on February 5, 2015. The duo had dated for several years before getting married. Recently, Shreya and Shiladitya had welcomed their first child, a baby boy, on May 22, 2021, whom they've named Devyaan. 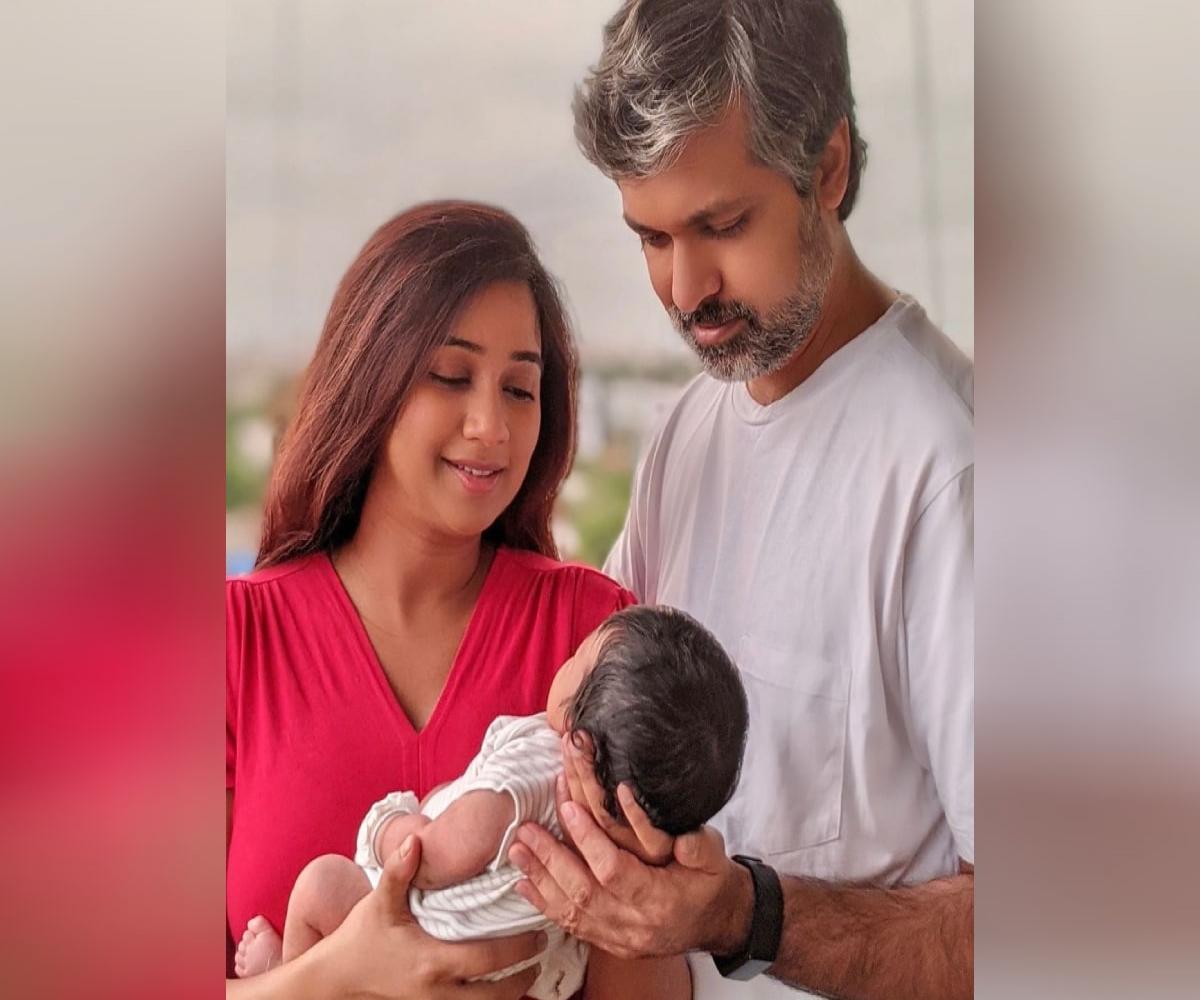 On the work front, Shreya Ghoshal recently sang the song, Chaka Chak from the film, Atrangi Re.