As Shobha Kapoor turned 71, her doting daughter, Ekta Kapoor shared a cherishable video to wish her on this special day. The video consists of special moments of Shobha ji with Laksshya and Ravie. 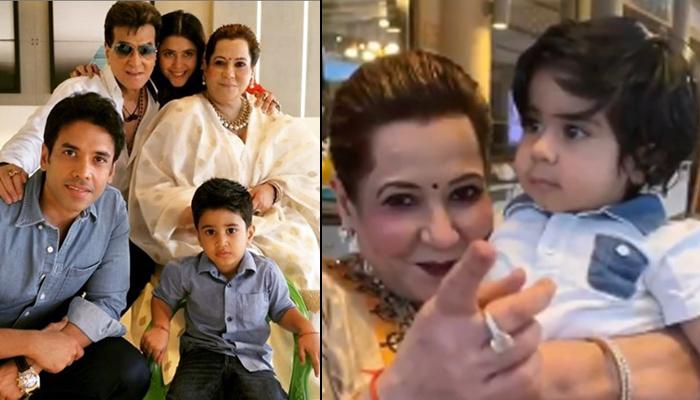 Ekta Kapoor and Tusshar Kapoor are two fortunate children, who are blessed with such understanding parents as they understood their decision of proudly accepting singlehood and not marrying. Jeetendra and Shobha Kapoor not only understood this major decision of Ekta and Tusshar’s lives, but also were supportive when the brother-sister duo decided to become single parents through surrogacy. While Tusshar had become a proud father to a baby boy, Laksshya Kapoor in 2016, Ekta too, had welcomed her little bundle of joy, Ravie Kapoor in 2019. (Also Read: Mohena Kumari Singh's Cheerful Boomerang With Her Mother-In-Law Is All About Their 'Saas Bahu Saga')

The Kapoors are on cloud nine ever since the arrival of Laksshya Kapoor and completing their family, they were blessed with Ravie Kapoor. Ekta Kapoor and Tusshar Kapoor are acing their roles as a single mother and single father. The proud single parents often share glimpses of their personal life on their social media handles, and especially on birthdays or anniversaries, they treat us with something that is too special to miss! And February 1, 2020, is no different!

On February 1, 2020, Shobha Kapoor turned 71 and to wish her on this special day, her doting daughter, Ekta Kapoor shared a cherishable video on her Instagram. The video shared by Ekta consists of some special moments of Shobha ji with her family, including her grandsons, Laksshya Kapoor and Ravie Kapoor. Ekta captioned it as “Happie bday boss To the one person who makes my world goes round! My biggest support my biggest worry my strength my GODDESSS! Happie bday @shobha9168! Ur fierce loyal smart n soft!!!! Again d Aquarians rule my life.”

Last year on Shobha Kapoor’s birthday, Ekta Kapoor had posted a picture of her mother and had penned down a heartfelt note for her indicating that she gave her the best birthday gift ever, by gifting her Ravie Kapoor! The Naagin producer had written, “Happie bday to my boss! U cannot deny that on ur 70th iv given d best bday gift to u! And I cannot deny that now I’m RULED BY TWO AQUARIANS.” Tusshar Kapoor too, had posted a beautiful picture of the Kapoor clan and on behalf of Laksshya, he had written, “Happy birthday Daadi......keep smiling forever! May all your wishes come true! #peace #love #famjam.” (Also Read: Anita Hassanandani Meets Karan Patel And Ankita Bhargava's Baby Girl, Mehr, Says Want To Have A Baby)

We all were pleasantly surprised on January 31, 2019, when 44-year-old Ekta Kapoor had shared with the world that she is now a mommy! Since 2019 marked the many firsts in Ravie Kapoor’s life, the little one had celebrated his first Children’s Day’s on November 14, 2019. For the same, Ekta had posted an adorable video of daadu-pota playdate. In the video, legendary actor, Jeetendra was seen playing with his grandson, Ravie and Ekta had beautifully captured the moment. Sharing the video, Ekta had written, “Children’s day! Raviolis first!” Sufficing to everyone’s wishes, legendary actress, Neena Gupta had commented, “Dikha doe na shakal” on her post. Ekta had then posted a hilarious reply, “Maaam meri maa mjhe ghar se nikal degi.”

Needless to say, Shobha Kapoor and Jeetendra are on cloud nine as their family is now complete! Sharing about the same with the Mid-Day, the legendary actor and second-time daadu had stated, “Shobha and I were over the moon when we heard it first. We are looking forward to him coming home. Our family makes daily rounds of the suburban hospital where the baby is currently under supervision. My family says he (Ravie) looks just like me, but then, a child's looks keep changing every day. It's tough to say who he will resemble in the future. Now, I have Laksshya and Ravie — they are the apple of my eye. I can die peacefully now as both my babies have their own babies."

On January 27, 2019, Ravie Kapoor came into the lives of the Kapoors and to celebrate one year with him, Ekta Kapoor had given a glimpse of his journey and special moments with the family. On his first birthday, Ekta had penned down a wish for her Ravioli, which could be read as "JAI MATA DI. Exactly a year ago on this day a new journey began... writing’ mentalhood’ had made me paranoid ...being a mother was not easy .. a life long commitment....u came smiled n I knew ...I finally belonged !!!! Thanku alt digital for making this video n gifting it to me ...n sorry maasi ur stressed I know...happpie bday ravioli." (Also Read: Juhi Parmar And Ex-Husband Sachin Shroff Come Together To Celebrate Daughter Samairra's 7th Birthday) 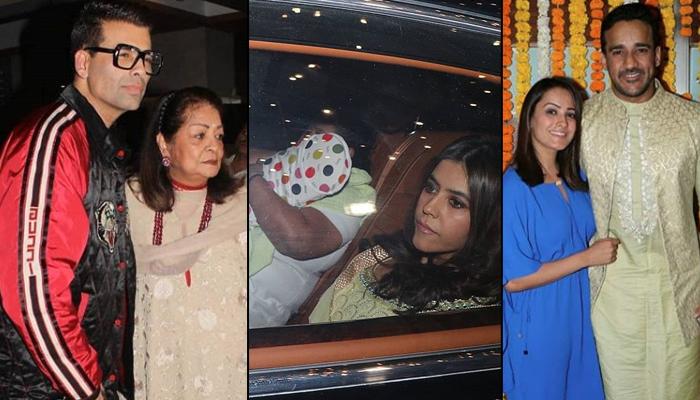 Becoming a mother is one of the most beautiful feelings in a woman’s life, and we bet, Ekta Kapoor is going through the same in her personal life. Riding high on her professional life with the success of her shows, good news came in heaps and bounty for the producer-director