Shilpa Shetty Praises Hubby, Raj Kundra's Culinary Skills As He Treats Her With A Vegan Spaghetti

Shilpa Shetty Praises Hubby, Raj Kundra's Culinary Skills As He Treats Her With A Vegan Spaghetti

Shilpa Shetty and Raj Kundra are made for each other. On October 15, 2020, Shilpa got a pleasant surprise when Raj treated her with a vegan spaghetti. 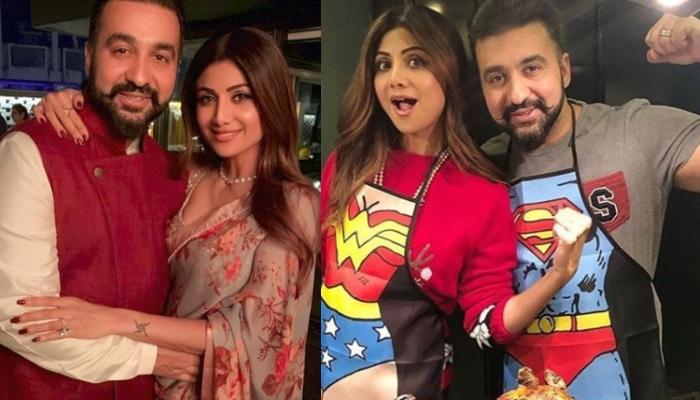 There is no greater joy than falling in love and getting old with the one you love. Each moment spent with them seems magical and very few are lucky to get a best friend in their husband. One such couple of the glamour world is Shilpa Shetty and Raj Kundra, who still radiates the boyfriend/girlfriend charm in their relationship. From their mushy pictures to cheesy captions, we completely love this couple. (Also Read: Prince Narula Shares A Picture With Wifey, Yuvika Chaudhary From The Hospital As They Fight Dengue)

Shilpa Shetty Kundra and Raj Kundra are an ideal couple, who often give perfect goals to the millennials. Shilpa Shetty had added ‘Kundra’ to her surname by tying the knot with London-based businessman, Raj Kundra on November 22, 2009. While Shilpa is the epitome of grace and beauty, Raj never fails to impress us with his fun and wit. They have always been each other’s loudest cheerleaders and their love is no less than a fairytale. The two have completed 10 years of marital bliss and are parents to two little munchkins, Viaan Raj Kundra and Samisha Shetty Kundra.

Even after so many years of marriage, Shilpa and Raj have managed to keep the charm of their relationship intact. By giving surprises to each other and never shying away from expressing their love, the two are an inspiration to many. On October 15, 2020, Raj gave a pleasant surprise to his wife, Shilpa by preparing a vegan spaghetti for her. She took to her IG stories and shared a picture of the mouth-watering dish and wrote, “Vegan Spaghetti made by hubby dearest @Rajkundra9 Faab Job! Yummmmyyy” atop it.

Shilpa Shetty and Raj Kundra’s proposal story is a hilarious one. Sometime back, Shilpa had appeared on Romedy Now's The Love Laugh Live Show, and had recalled her first reaction when her then-beau, Raj Kundra had proposed her with ‘just 5-carat’ ring. Revealing how Raj had planned the proposal, Shilpa had shared, "He'd booked out the whole banqueting hall at The Grand. A bit OTT... he had like these violinists playing... He conned me into it, He said we are having lunch at a friend's place so dress up well. Not casually, just dress up well and my sister told me to wear red, so it was already planned. He told me from Mumbai we are going to this really cool place. I had no clue, but he had already asked my parents. So, the setting was all there and the cloche opened, and he did propose in the last course, dessert and it was this diamond ring." (Also Read: Smriti Khanna Celebrates Her Daughter, Anayka's Half-Birthday, The Mother-Daughter Duo Twins In Blue)

Shilpa had further revealed how she had paused for a moment before saying yes to him, and the reason was hilarious. She had stated, “It was a 5-carat diamond ring and I might sound really materialistic here, but I was like it's just 5 carats. So, I took a while to say yes because I was like 'This is not what I imagined'. No no, I was just joking... So, he was like, because I took 2 seconds more, he was like, 'The wedding ring will be bigger', that's Raj for you. So, I said yes there.”

In an interview with the Filmfare, Raj Kundra had revealed that it was love at first sight for him and in all-praises for his superwoman, Shilpa Shetty Kundra, he was quoted as saying, “It was love at first sight. From the moment I saw her, I knew I’d love her to be my life partner. She’s got an angelic side to her. Her homely side grew on me as I got to know her. She’s a great housewife. She’s a supermom! She’s the wind beneath my wings and I try to be her support system. We are each other’s strengths.” (Also Read: Sushmita Sen's Fan Asked Her When She Is Getting Married, Beau, Rohman Shawl Gives A Hilarious Reply)

Isn’t Raj an amazing husband? What do you think? Let us know.