Bollywood actress and a doting mommy, Shilpa Shetty Kundra posted a video with her son, Viaan Kundra as they made a DIY scrub at home. Take a look! 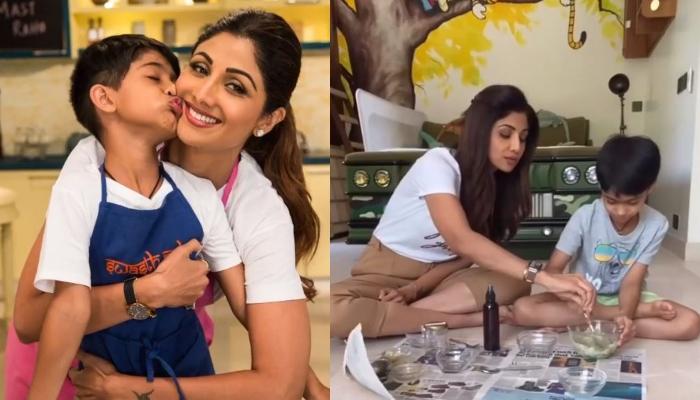 There’s no denying in the fact that kids are a blessing in disguise. It is no secret that parenthood is an emotional and a roller-coaster ride that involves a lot of ups and downs. Sometimes, parents also overlook their self and put themselves on hold to nurture their kids. One such doting parents are Shilpa Shetty Kundra and Raj Kundra. On November 22, 2009, Raj and Shilpa had become each other’s forever and had embarked on their journey of ‘happily ever after’. Shilpa and Raj have blissfully shaped their ‘happily married life’ and were blessed with a baby boy, Viaan in 2012 and on February 15, 2020, baby girl, Samisha had completed their family forever. (Recommended Read: Anupam Kher Hilariously Appreciates Brother, Raju Kher For Giving Him A Quick Haircut [Watch Video])

Since then, Shilpa Shetty Kundra is giving us major mommy goals and all the innovative ideas in the world to keep a healthy bond with your kids. Now in her recent video, the actress has revealed how to keep the kids engaged creatively during this lockdown so that they don’t feel bored at home. Scroll down to see her creative idea! 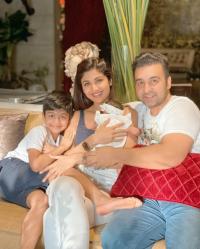 On June 09, 2020, Shilpa Shetty Kundra took to her Instagram handle and posted a video tutorial of ‘DIY Mojito Salt Scrub’ which she has made with her son, Viaan Kundra. In the video, we can see the doting mother, Shilpa Shetty Kundra sitting on the floor with all the ingredients right in front of her. The mother-son duo looks adorable throughout the tutorial video as little Viaan follows his mother’s instructions quite obediently. Along with the video, Shilpa Shetty Kundra wrote down a long caption in which she revealed the best way to keep your kids entertained innovatively is to make them learn new things. Her caption can be read as “Making a DIY Salt Scrub with Viaan. This is for all those bored children and Moms who need innovative ideas to keeps their kids occupied (I know that feeling) It works better when there is a creative and useful end result.”

Earlier, during the Coronavirus lockdown, on April 20, 2020, Shilpa Shetty Kundra had taken to her Instagram handle to give some Monday motivation by sharing a workout session video with her hubby, Raj Kundra. In the video, we could see their son, Viaan Raj Kundra actively participating with his parents in their workout session. Along with the video, Shilpa had written, “I had shared a little exercise-fun with Viaan a few days ago, and I was asked for the entire workout video. Well, I don’t have the entire workout captured, but sharing what I found from my archives. I truly believe that the family that eats, prays and works out together... stays together!” (Don't Miss: Sushmita Sen Shares Why Her Beau Rohman Shawl Kept Hiding His Age During Their Initial Conversations)

Recently, Shilpa Shetty had celebrated her 45th birthday on June 8, 2020, and had taken to her Instagram handle to share two pictures from her birthday celebrations. In the first picture, Shilpa’s son, Viaan is cutting the cake for his mom as she smiles holding her little daughter, Samisha. While Raj could be seen playing with his little daughter. In the second picture, Shilpa poses with her entire family, including her husband, son, sister and mothers. Along with the pictures, Shilpa had mentioned how her hubby, Raj Kundra had made her favourite cake. She had written, “Yaaay! My favourite vanilla meringue cake freshly baked by the bestest hubby in the world, @rajkundra9 , family by my side ( the rest on a video call )and all the love , wishes and blessings pouring in from all over the world .. Feeling a surge of love and gratitude.. Thaaankyouuuuu sooooo much.” Take a look at Shilpa’s birthday celebrations below: (Also Read: Hansika Motwani Clears The Air On Reports Of Her Getting Married To A Businessman In A Few Days) 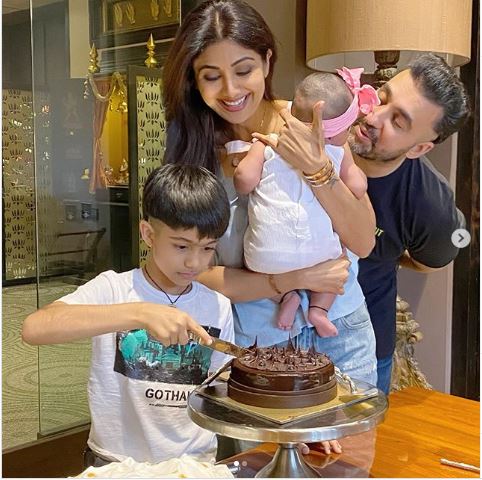 Do you like Shilpa Shetty’s DIY scrub? Let us know!