Has it ever happened to you that a person, with whom you had once picked up a fight with or were not sharing cordial terms, is now one of your best buddies? While we can’t say if once ex-sautans, Raveena Tandon and Shilpa Shetty are best pals, but we can certainly say that they have let bygones be bygones and we bet that by the end of this article, you will say that too! (Do Read: Raveena Tandon's Love Life: From Being Cheated By A Bollywood Superstar To Her Final Dig At Love)

Raveena Tandon and Shilpa Shetty’s relationship goes down a long way. From ruling the silver screen in the 90s to sharing a common lover interest, the two actresses were then famous for not bonding well. And why would they? Akshay Kumar had cheated on his engaged fiancée, Raveena with Shilpa Shetty and the latter was cheated of with Akshay’s now wife, Twinkle Khanna. This love triangle created quite a hullabaloo in the 90s.

While the trio, Raveena, Akshay and Shilpa are happily married now, looks like Raveena and Shilpa have also swayed away from the past and are now on cordial terms. At Umang 2019, held to celebrate the contribution of Mumbai police, a never-seen moment was witnessed when Shilpa Shetty held Raveena Tandon’s hand, which looked like she didn’t want her to go! With sister, Shamita Shetty by her side, look at the three actresses all smiles in their candid best:

Amazing, right? Remember, a while back, on the sets of Super Dancer Chapter 2, both Shilpa and Raveena took a fun dig at their past. As reported by Mumbai Mirror, Raveena and Shilpa were giggling over their ‘common mistake’. A source informed the tabloid, “When Raveena mentioned that she has made a lot of mistakes in life, Shilpa winked, ‘Some of the mistakes were common,’ sending them into peals of laughter. At another point, everyone was discussing Golmaal when Raveena clapped back, ‘Everyone does golmaal in life, Shilpa and I have done it too. You know what I mean, right?” (Must Read: The Alleged Love Affairs Of 'Padman' Actor Akshay Kumar That Lead To Many Controversies) 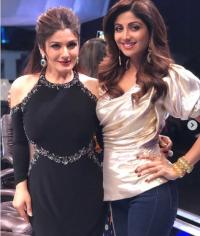 Taking you all into the throwback days, do you know, Akshay Kumar and Raveena Tandon also had an elaborate engagement ceremony? At a chat show, Raveena had spoken about their engagement and had shared, “It was a voluntary decision. I was engaged to somebody I knew. This is what I wanted, to lead a very normal life. I quit in advance before marriage because we did think that when there will be last day of my shoot, we will go ahead and get married. Once I re-started my career, he again said that leave it and we will go ahead with the wedding. But, then I told him that once I chose you over my career, but now I will choose my career over you."

There were also rumours that the Mast Mast stars had also gotten married secretly. Revealing the truth, she stated, “No, there was a very elaborate engagement ceremony. With the pandit doing pooja and everything. His family had flown down from Delhi, my family came from Delhi. One of his elders had put a red dupatta on my head, and I think that was mistaken to be a wedding.”

Shilpa Shetty, on the other hand, had her own set of revelations to make. Speaking about how unimaginable it was for her to believe that Bollywood’s Khiladi had actually played with her heart, Shilpa had stated, “I never imagined that he could two-time me, and that too all along our relationship.” Speaking about parting ways with Akshay, Shilpa was quoted as saying, “It has been a rough period personally. But I'm glad that the ordeal is over. After every dark cloud, there's always a silver lining. All this while, though things were going well professionally, my personal life was pulling me down. It feels good that it's finally behind me."

She further opened up, “Akshay Kumar used me and conveniently dropped me after he found someone else. The only person, I was upset with, was him. But I'm sure he'll get it all back. It's not easy to forget the past so soon, but I'm glad I've had the strength to move on. Today, he's a forgotten chapter as far as I'm concerned. I will never work with him again.” She also stated, “When you love someone and all along, don't realise that you are being taken for a ride, it can be very annoying. I wanted our film to get over and be released so that it wouldn't come in the way of my producers. I couldn't harass them just because my personal life was turning into shambles. So, I decided to wait till Dhadkan was done with.” (Also Read: The Love Story Of Most Adorable Bollywood Couple Shilpa Shetty And Raj Kundra)

While Akshay did give a hard time to Raveena and Shilpa, but it must be noted about how happy the celebrities are in their lives now. We wish them a lifetime of happiness!