Shilpa Shetty Kundra and Raj Kundra are back again with a hilarious video but every married couple will find this hilariously relatable. Take a look! 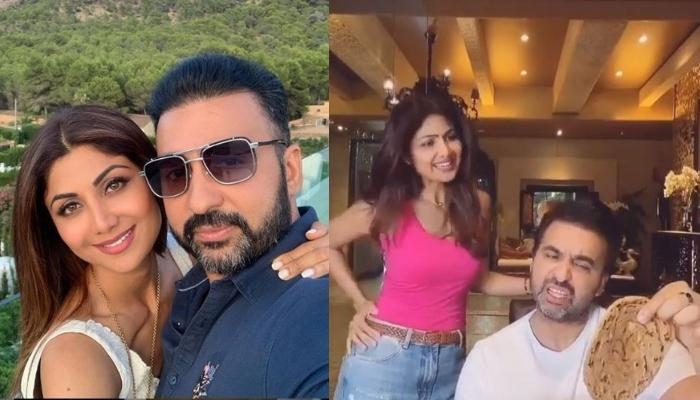 There are tones of couples out there in the glamour industry, while some are quite private about their personal life, some like to spread their lovely vibe everywhere. One such couple with happy and positive vibes is Shilpa Shetty Kundra and Raj Kundra, who has been married for over 10 years and is a super-entertaining couple. However, the biggest thing about this couple is the fact that their togetherness, excitement to be with each other, and chemistry only seems to blossom more and more with time. (Recommended Read: Karan Johar Talks About Keeping His Twins, Yash And Roohi Away From Falling Into Stereotypes)

If we subtract all those romantic, funny, and entertaining TikTok videos from the list, still then, the two never skip a chance to woo each other on their special dates or making their normal days look special. The beautiful chemistry between Shilpa Shetty Kundra and Raj Kundra even after 11 years of marriage teaches us that it’s not the time, but the people, who lift or drop the intensity of love in a relationship. On May 08, 2020, Shilpa Shetty Kundra took to her Instagram handle and posted a hilarious video with her hubby, Raj Kundra. In the video, we can see Shilpa bringing an aalu ka parantha for her hubby but just having a look at the parantha, Raj complained to Shilpa for not putting any potatoes in it. After hearing this, Shilpa gave a reply that is going to long live in the Indian kitchens. She said, “Aalu kaha hai, Kashmiri Pulao main Kashmir dikhta hai kya tujhko, Aur toh aur, Banarsi saree main banaras najar aata hai kya tereko, baat karta hai!” Hearing Shilpa’s epic response to his question, Raj Kundra simply lowers his head in utter disappointment. However, along with the funny video, Shilpa wrote a caption that can be read as “Food for thought!! #fridayfun #laughs #comedy #cray #food.” Take a look! (Don’t Miss: Taapsee Pannu Misses Her Parents Badly On The Second Anniversary Of Her Mumbai House's Grah Parvesh)

Well, the doting couple is simply one of the biggest superstars of the popular application, TikTok and holds a huge fanbase there. However, their funny videos have helped them to increase their followers and fanbase on Instagram too that is the reason why they constantly keep on posting such funny videos. Recently, on May 5, 2020, Shilpa had taken to her Instagram handle and had shared a hilarious video with her 'darling hubby', Raj. In the first part of the video, we could see the dipped deep in love couple laughing before their marriage. However, in the second part, we could see Shilpa snorting with laughter, as Raj had looked at her in shock. The actress had captioned this hilarious TikTok video as "How we change! The truth may be bitter but funny... Don’t think @rajkundra9 was amused! Anything that can make us laugh at this point!" Have a look.

At the moment, both Shilpa and Raj are having one of the best times of their lives as we all know that people from the glamour industry never have time to spend with their loved ones. That is the reason why the doting couple isn’t skipping a single day without making it a memorable one for them and their fans too. In an interview with Pinkvilla, Shilpa had opened up on how she had met the love of her life, Raj. She had shared, "I met Raj in London through a common friend to discuss a business deal. I was swoon by his smile, charm, and persona. After he left, I asked my friend about him. He told me that he is already married, and I was left disheartened. But, at that time, we did not know that Raj is going through a divorce. Four months later, Raj had once offered me to stay at his batch pad, since I was travelling to London frequently. I was surprised to know about his bachelor pad, and later he revealed that he is going through a divorce." (Also Read: Varun Dhawan's Sweet Reply To Fan Who Asks Him About Baby Planning On His Picture With Natasha Dalal) Do you like Shilpa and Raj’s TikTok video? Let us know!